The world of conspicuous glamor strutted down the catwalk as cameras flashed from the sidelines at Wulin Square last Thursday. 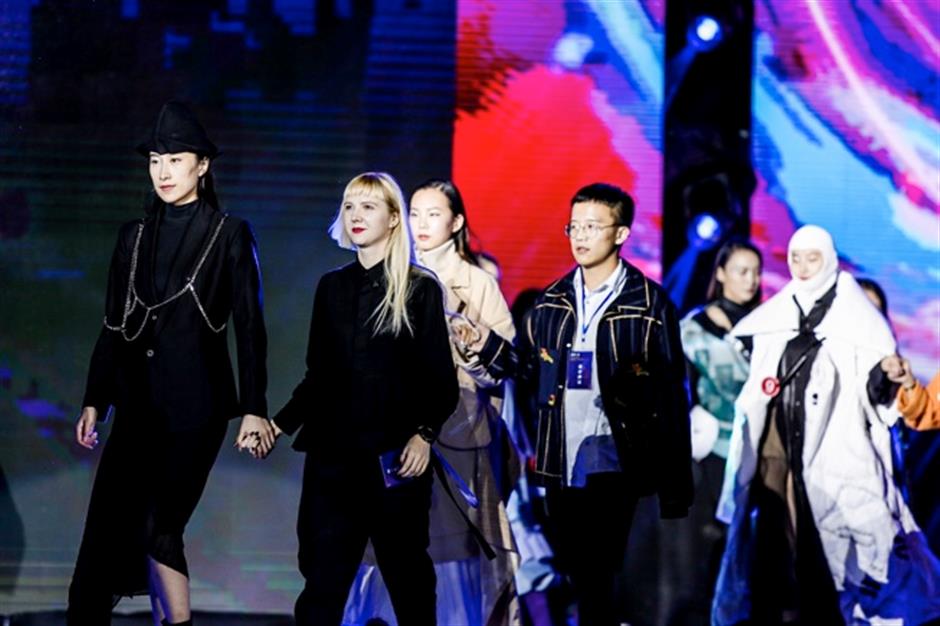 Models strut down the catwalk at the awarding ceremony of the 12th International Women’s Fashion Design Competition. (Photo: shine.cn)

The 12th International Women’s Fashion Design Competition culminated in an awarding ceremony where 20 prizewinners were revealed after nine months of judging.

The fashion design industry’s biggest event in Hangzhou, attracted more than 700 entries from 10 countries and witnessed Li Yiyang, from Xi’an Polytechnic University in Shaanxi Province, claim the gold award. He integrated the vintage elements in the 1970s, like propaganda posters and food stamps, with chic design to express hipsters’ attitudes toward trends and the old soul inside young people.

Jiang’s collection was inspired by traditional Chinese medicine. She fused the theory of yin (cold) and yang (hot) energy, meridian system and herbs with oversize coats and flowing dresses, in a bid to take on the mysteriousness and tradition of TCM through attire.

Lu’s inspiration came from the movie Pride and Prejudice, where the costumes were characterized by 19th century Romanticism with big sleeves, highlighted shoulders and tightened waistlines.

She borrowed these characteristics in her designs, combining modern and conventional aesthetics together to express a neutral culture.

Zheng Ruiyu from China Academy of Art uses her collection to display the mildness and poetic vibe of Jiangnan (lower reaches of south Yangtze River). The crisscrossed lanes and alleys in Huzhou, her hometown in nethermost Zhejiang Province, and Hangzhou inspire her. She was given the New Media Prize.

“My growing experience in Jiangnan was an inspiration to me. Grayish-green and indigo blue on ubiquitous lanes are the best hues to showcase the temperament of Jiangnan women, so I take them as the theme colors,” said Zheng.

Karolina Kvedaraite, from Coventry University Fashion, is one of the three foreign prizewinners. Her collection is named “Studio Nior,” inspired by Amy Winehouse’s song “Back to Black” and her best friend.

“The music video is all in black and white, and a lot of people wearing black clothes inspire me as well. I just get this black reference to my collection, but I make it to match what my muse and customers like to wear every day,” Kvedaraite said. The attire is designed from British tuxedo jackets and skirts for formal parties rather than daily wear. Since the weather conditions of the two countries are totally different, she uses more summer fabric for the Chinese market.

“In England we wear more winter clothes but people in Hangzhou wear more summer clothes. I’ve found young people in the city are really cool and stylish, so I think my designs really match their lifestyle,” Kvedaraite said.

Kvedaraite has a Chinese partner and they are seeking opportunities in China. Last year, she registered a trademark, Studio Karro, in Guangzhou Province, and visited e-commerce giant Taobao’s office in London, aiming to know how the Chinese online shopping platform works.”

“Hangzhou has a booming e-commerce industry, and we’re still thinking about which platform to join,” she said. “Hoping someday in the future I could sell my design in both brick-and-motor and online shops in China.”

Hangzhou is the center of the rag trade in China as it gathers numerous designers, studios, factories and brands. The city hasn’t stopped there. It has established the design competition to recruit top-flight clothing designers from around China and the world.

“The competition cultivated around 60 designers in Hangzhou. Some of them were sent to European design colleges under government financial support and returned as pillars of the industry,” said Qian Wei, director of Hangzhou Fashion Designer Association.

Hangzhou-style women’s clothing is the epitome of the industry in China and reflects the fashion trends every year. In the past, consumers tended to flock to “hot” mass-marketed merchandise and fast-fashion brands, but now they are becoming more discerning and now often prefer original designs on online platforms and boutiques.

The competition will provide new designs for the local market. Stores may then purchase the designs and have factories produce them under their own brand names.

Thus far, a batch of noted fashion brands have been established in Hangzhou, including popular brands JNBY, Eifini and X.YING. Some of their chief designers came out from the competition.

“Talent is the core of fashion design. The competition has let people know about Hangzhou’s ambition for talent and accelerated development at the same time. It is no doubt the best channel to attract top-notch designers,” added Qian.