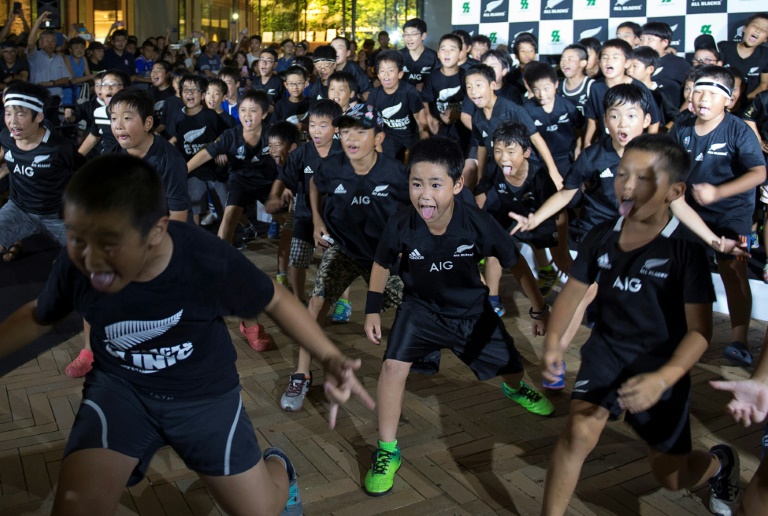 The All Blacks were greeted by hundreds of fans and a Haka dance as they arrived in Japan ahead of their bid for a third World Cup title.  (Photo: AFP)

New Zealand head coach Steve Hansen insisted Monday that the All Blacks welcomed the weight of expectation after arriving in Japan ahead of their World Cup defence.

The All Blacks will start as favourites to complete a hat-trick of titles, but face tough competition from the likes of England, Ireland, Wales and South Africa, who they face in their opening game in Yokohama on September 21.

"You're expected to win all the time, so you have to make a choice whether you sink or you stand up," Hansen told reporters at New Zealand's team hotel in Kashiwa, northeast of Tokyo.

"We're here to win it first and foremost, but also to really enjoy it," he added. "For us it's about getting excited about trying to do something that nobody else has ever done before -- and we are the only team at this tournament that can do it.

"It's a unique challenge and if we really embrace that, and have fun doing it, then that helps you deal with all the pressure that comes with it."

The All Blacks, who pulverised Tonga 92-7 in a World Cup tune-up in Hamilton at the weekend, reached their base two hours late after their arrival in Japan was plunged into chaos by the fallout caused by a powerful typhoon which battered Tokyo overnight.

Rivals England were also caught up in the aftermath, marooned for five hours at Narita airport, while the Wallabies delayed their flight by a whole day to avoid similar issues.

Despite their problems, New Zealand's players were greeted by hundreds of autograph-hunting fans outside the team hotel, a welcome that visibly moved some of the exhausted players and which prompted captain Kieran Read to say: "This is just a stud, it's really blowing us away."

The All Blacks, whose 14-try demolition of Tonga was so embarrassingly one-sided Hansen opted to finish the match with only 14 players to simulate being a man down at the World Cup, have also been drawn alongside Italy, Canada and Namibia in Pool B.

World champions in 2011 and 2015, the All Blacks have shown the odd chink in their armour in the run-up to Japan, losing recently to fierce rivals Australia and drawing against the Springboks in Wellington during the Rugby Championship.

"It was great to play an expansive game and have so much ball where we could dictate terms," he said.

"It's going to be a big challenge. There's no doubt that we're going there to win it and play the best footy we can -- so personally expectations don't change whether it's a normal Test match or a World Cup."