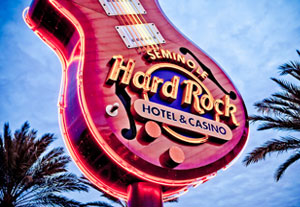 The music-themed Hard Rock casino opening this summer promises to become an East Coast musical mecca, with over 200 nights of live music in its first year.

The global gambling, entertainment and resort company is also enlarging the concert venue at the former Trump Taj Mahal to fit 7,000 seats, up from the 5,200 it formerly held.

Jim Allen, CEO of Hard Rock International and a veteran Atlantic City casino executive, promised an audience last week at a local church that the new casino will offer more live music than Atlantic City has ever seen.

By comparison, the nearly 15,000-seat Boardwalk Hall hosted 11 big-name concerts last year, in addition to stage shows and non-musical events. The musical offerings of individual casinos — and their frequency — vary widely, with most restricted to weekends.

“Bringing entertainment into the city mid-week at off-peak times will be a particularly persuasive reason for visitors to consider extending their stay,” he said. “Turning a two-night weekend stay into a long weekend or mid-week getaway can make a huge difference for Atlantic City’s lodging, food and beverage, retail, gaming and tourism businesses.”

The director of the Center for gaming Research at the University of Nevada Las Vegas said having a diverse lineup will lure more people.

“If people get into the habit of visiting Atlantic City for live music, they may continue to do so,” David Schwartz said.

Hard Rock boasts the world’s largest collection of music memorabilia, some of which has already made its way into the still unfinished Atlantic City facility. Items include a dress worn by Mariah Carey, a jumpsuit worn by Whitney Houston and an acoustic guitar autographed by Jon Bon Jovi.

Even the casino’s business cards have a musical theme. At the top of each one is the phrase, “Please allow me to introduce myself,” the opening line from the Rolling Stones’ classic “Sympathy For The Devil.” Employee name tags are in the shape of guitar picks.

Allen said the live shows will range from top A-list performers in the Mark Etess Arena (Hard Rock is keeping the name of the venue in honor of the former Trump executive who died in a helicopter crash before it opened) to clubs or smaller performance spaces inside the casino.

And despite the ubiquitous guitars, it won’t be only rock ‘n’ roll. Allen promises a diverse musical mix for every taste.

“You’re looking at the person who just signed Jay-Z and Beyoncé to play Hard Rock Stadium” in Miami, he told an audience at the New Shiloh Baptist Church last week.