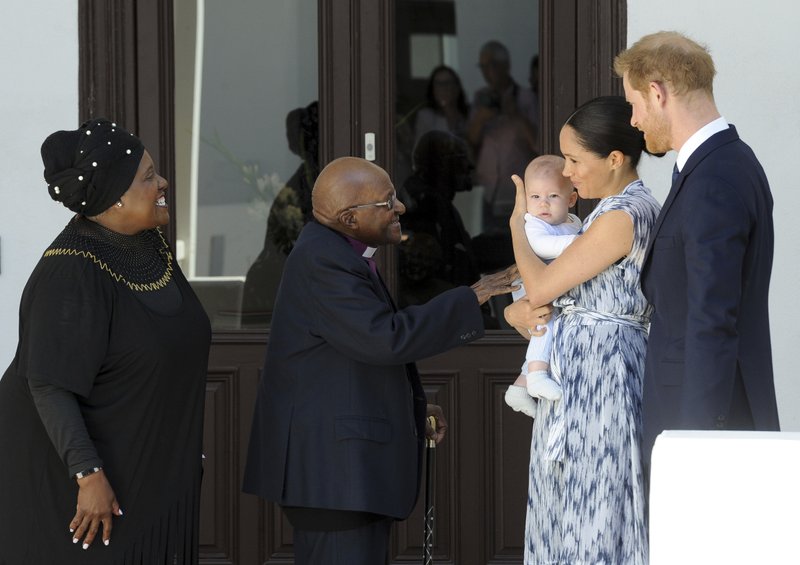 In this Wednesday, Sept. 25, 2019 file photo, Britain's Prince Harry and Meghan, Duchess of Sussex, holding their son Archie, meet Anglican Archbishop Emeritus, Desmond Tutu and his wife Leah in Cape Town, South Africa. Prince Harry and his wife, Meghan, are fulfilling their last royal commitment Monday March 9, 2020 when they appear at the annual Commonwealth Service at Westminster Abbey. It is the last time they will be seen at work with the entire Windsor clan before they fly off into self-imposed exile in North America. (Photo: AP)

The Duke and Duchess of Sussex have released a video of Meghan reading to their son as they mark Archie’s 1st birthday and promote a campaign to help children during the coronavirus pandemic.

The video shows Meghan sitting with Archie on her lap and reading one of his favorite books, “Duck! Rabbit!” Archie grabs at the pages and helps turn them during the reading. Harry, who filmed the short video, whoops and says “bravo” from behind the camera at the end.

The three-minute video was posted Wednesday on the Instagram accounts of Save With Stories and Save the Children U.K. for a fundraising campaign with the goal bringing food and learning resources to children and families struggling during the pandemic.

Archie Harrison Mountbatten-Windsor was born on May 6, 2019 at London’s Portland Hospital. His parents chose not to pose with their newborn outside the hospital, a recent tradition in Harry’s family, and decided against giving the baby a royal name.

Archie had an eventful first year. He accompanied his parents on a tour of Africa and at the age of 4 months was introduced to Archbishop Desmond Tutu, a Nobel Peace Prize winner.

Harry and Meghan shocked many early this year with an announcement that they intended to quit as senior royals and split their time between Britain and North America. They couple officially stepped down from royal duties at the end of March, saying they were giving up public funding and seeking financial independence.

The family went from living in a cottage on the grounds of Windsor Castle, to Vancouver Island in Canada and then on to Los Angeles before lockdown measures commenced.