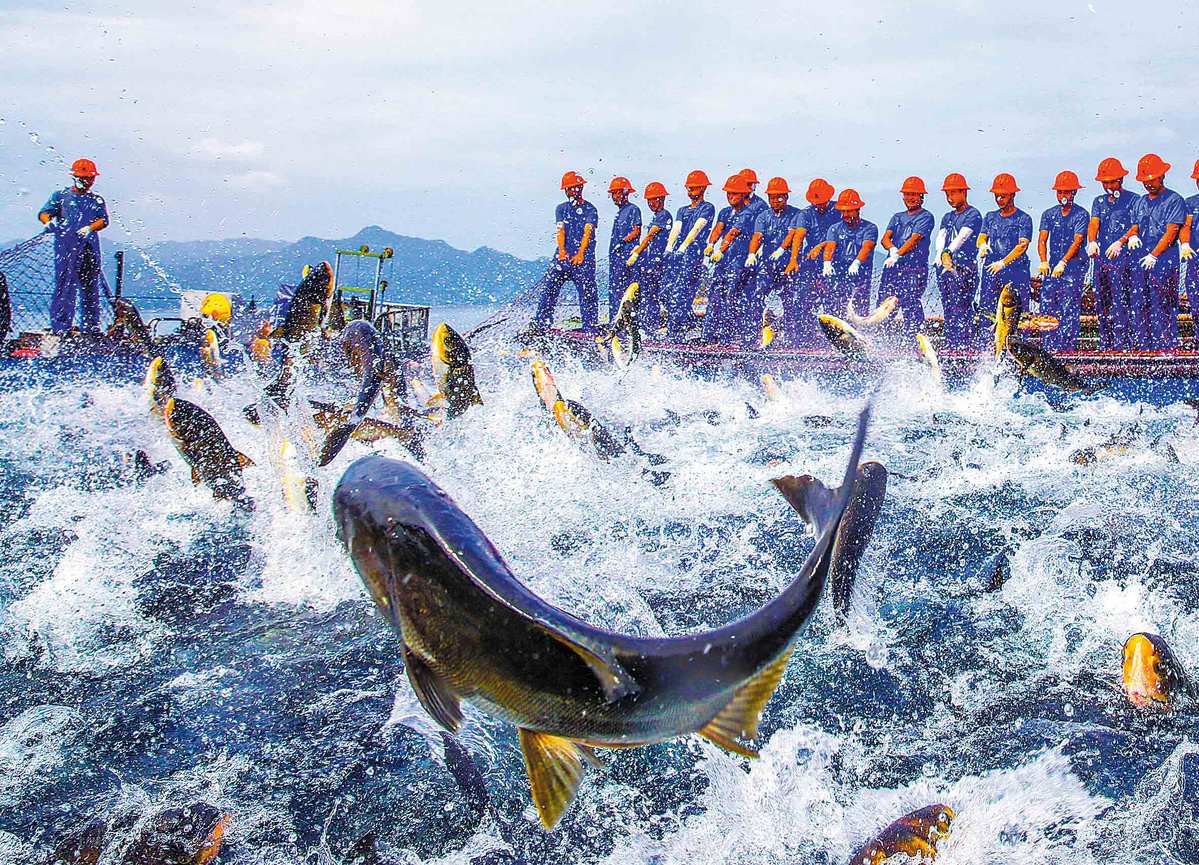 Fishermen haul a giant net at Qiandao Lake in Chun'an, Zhejiang province, on Thursday, to celebrate the Chinese Farmers' Harvest Festival. Some 40 metric tons of carp were netted. （Photo：CHINA DAILY）

The fifth Chinese Farmers' Harvest Festival, designated on the day of the Autumnal Equinox, falls on Friday this year, with a major event to be held in Chengdu, Sichuan province.

Tang Ke, head of the office of the festival's organizing committee, said the festival this year will highlight the purpose of benefiting farmers through presenting and promoting new varieties of seeds and new technologies in agriculture, as well as publicizing the law around rural vitalization.

In Jiangsu province, a week of voluntary medical care services and schooling assistance will be launched in rural areas to help farmers.

Activities featuring farming culture, such as presenting intangible agricultural heritage and sports events in rural areas will be held during the festival.

A market for cultural and creative products will be open in Henan province while a farmers' singing event is planned in Heilongjiang province to showcase local traditions.

Events to boost food consumption will be organized in 36 cities in an effort to increase farmers' incomes and vitalize the festival economy.

The major event of the festival this year is set on farmland at an agricultural exhibition park in Chengdu, where five exhibition centers have been built next to a 200-hectare high-quality plot of farmland, introducing rural culture and grain-related technologies.

Colorful rice planted on the farmland creatively portrays corn, cabbage, chickens and granaries, providing an image of the harvest and prosperity for visitors, Tang said.

The role of science and technology in developing agriculture will also be highlighted at this year's festival. Exhibitions will focus on smart agriculture, digital villages and the vitalization of the seed industry.

The Great Granary Science and Technology Exhibition Center at the major site of the event in Chengdu aims to promote high-quality varieties, modern agricultural machinery and advanced technologies.

In Beijing's Changping district, the operation of an unmanned corn harvester will be demonstrated in a field.

Local authorities are urged to organize agricultural technology promotion, training on production skills, and other activities to provide farmers with more opportunities for exchanges and learning, Tang said.

Wang Yuanwei, a farmer in Sichuan's Yongfeng village, has received excellent rice varieties and learned a series of new planting techniques from the local science and technology bureau.

His 213 hectares of rice fields had another bumper harvest this year, he said at one of the launch activities in the province on Sunday.

To involve more farmers in the festival and boost creativity and productivity, farm skills competitions will be held to cultivate talent in planting, entrepreneurship, e-commerce and folk art, Tang said.

Urban residents are also participating in the festival through consumer promotion activities that started from Sept 13.

E-commerce platforms such as Alibaba, JD and Pinduoduo have actively responded to the promotion season targeting agricultural products.

Local authorities will carry out various consumer promotion activities that integrate online and offline sales, helping farmers increase incomes and enriching the dishes on the dining tables of urban residents.