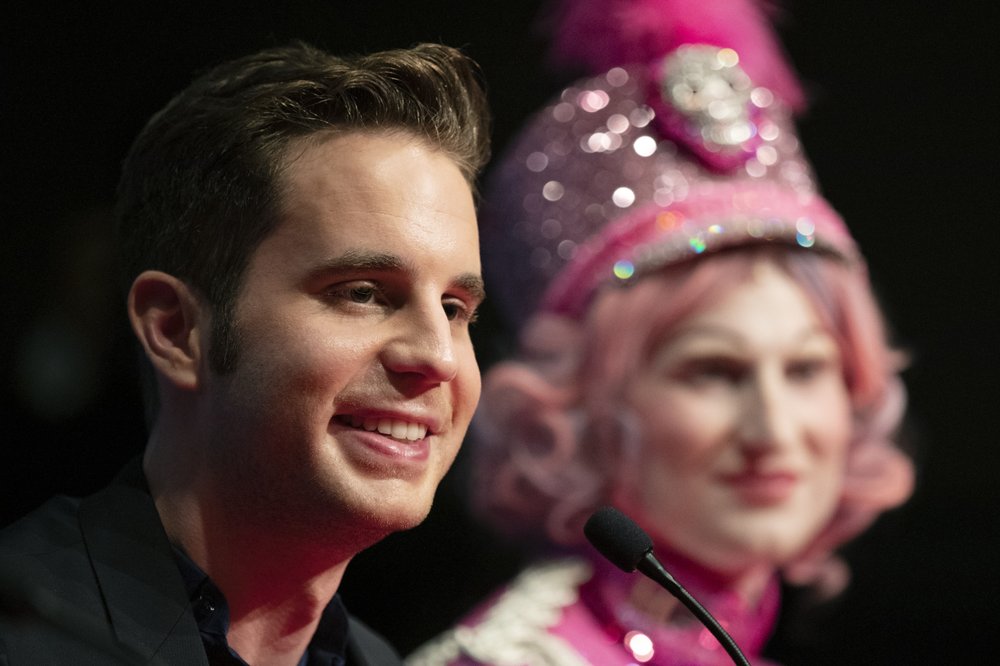 Award-winning actor and musician Ben Platt took a quick jab at President Donald Trump late Friday while being honored by Harvard University’s famed Hasty Pudding Theatricals as its 2020 Man of the Year.

Students dressed in drag and elaborate costumes bestowed the golden pudding pot — and a sparkly bra — on Platt, but not before Hasty Pudding members poked fun at his various roles in theater, television and film.

Platt sang Nina Simone’s classic “Feeling Good” and later gave a political speech about whether a hot dog is also a sandwich.

It was during this speech that Platt proclaimed “anyone but Trump 2020,” as the celebratory roast neared its end.

“In this day and age, I feel like we should be really leaning towards connection and togetherness,” Platt quipped, as he concluded that a hot dog should be considered a sandwich.

The 26-year-old is the youngest recipient of the award in its 54-year history, handed out annually by the troupe that dates to the late 18th century.

Platt was selected because of his “incredible impact on Broadway and Hollywood at such a young age,” the oldest collegiate theatrical organization in the US said in a statement.

“I’m very honored to be on this list of men and I hope to do good by it in the future,” Platt said.

Platt won a Tony in 2017 for “Dear Evan Hansen.” He’s also known for his role as Benji Applebaum in the films “Pitch Perfect” and “Pitch Perfect 2.”

He’s currently filming the second season of the Netflix series “The Politician,” which earned him a Golden Globe nomination last season.

He stars in the film “Run This Town,” which premiered at last year’s SXSW Film Festival and will be released this spring. Platt will also star in the film adaptation of the Stephen Sondheim musical “Merrily We Roll Along.”

Also a musician, Platt’s debut album “Sing To Me Instead” was released last year.

The original Broadway cast recording of “Dear Evan Hansen” also took home the Grammy for best musical theater album and the original company won a Daytime Emmy for a performance on the “Today” show.

Members of the troupe teased Platt about the missing Academy Award that would otherwise have him join the elite squad of EGOT winners. Platt would be the youngest person to achieve this prestigious accomplishment if he were to win an Oscar.

“We’ll meet in a couple years,” Platt joked to the member who played his fictitious Oscar.