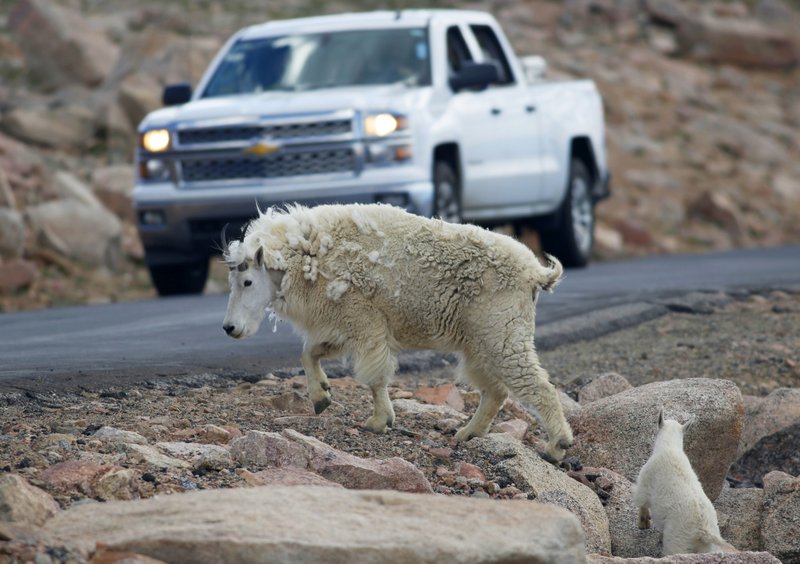 In this July 15, 2016, file photo, a mountain goat leads its kid across the Mount Evans Scenic Byway just below the summit near Idaho Springs, Colo. (Photo: AP)

A disputed effort to help native bighorn sheep in Grand Teton National Park was scheduled to start Friday with a helicopter buzzing over rugged peaks with sharpshooters aboard tasked with killing nonnative mountain goats.

Park officials closed off a large portion of the Teton Range to the public for the eradication effort and planned to begin the flights in the afternoon, park spokeswoman Denise Germann said.

The operation was scheduled despite opposition from Wyoming officials including state Game and Fish Department Director Brian Nesvik, who protested Friday in a call with acting Grand Teton Superintendent Gopaul Noojibail. Emails sent to Germann Friday afternoon asking whether the hunt had begun were not immediately returned.

“We again asked them not to use this method of removal. We were told, ‘Thank you for your comments, this is what we’re going to do,’” department spokeswoman Rebekah Fitzgerald said.

Department officials aren’t opposed to shooting the goats, Fitzgerald said, just doing so from a helicopter.

The 100 or so goats in the park are descended from animals introduced near the western Wyoming park decades ago. They could spread pneumonia to a herd of about 100 native bighorn sheep, officials have said.

The goats also compete with the bighorns for food and habitat on the steep slopes of the famous craggy mountains.

The park’s plan to eradicate the goats also calls for using sharpshooters on the ground. The National Park Service has been keen to go after the goats before they become too numerous to be easily eliminated from the nooks and crannies of the rugged backcountry.

Winter in some ways is an ideal time because few park visitors venture into the Tetons in winter compared to the busy summer tourist season. Friday’s weather in the Tetons was a chilly 18 degrees (-8 Celsius) but clear and calm.

Foul weather called off a previously scheduled helicopter-borne attempt at shooting the goats in January. After that eradication effort was postponed, the Wyoming Game and Fish Commission board that sets state hunting rules and limits passed a resolution demanding that the National Park Service only use hunters on the ground to pursue the mountain goats.

Hunters on foot could at least try to recover the goats they kill so the meat would not go to waste, commissioners said.

The National Parks Conservation Association, a nonprofit group that lobbies to protect and enhance the US National Park system, does not object to the helicopter goat shooting, said group program manager Sharon Mador.

But she said her group worries that the eradication program could lead to members of the public eventually getting hunters on foot permission to kill the goats.

“It would be an ad-hoc hunt in the park,” Mader said.

Olympic National Park also has been struggling with growing numbers of nonnative mountain goats but has been using helicopters to capture and move them alive to North Cascades National Park, where they are native. The two parks are in Washington state.