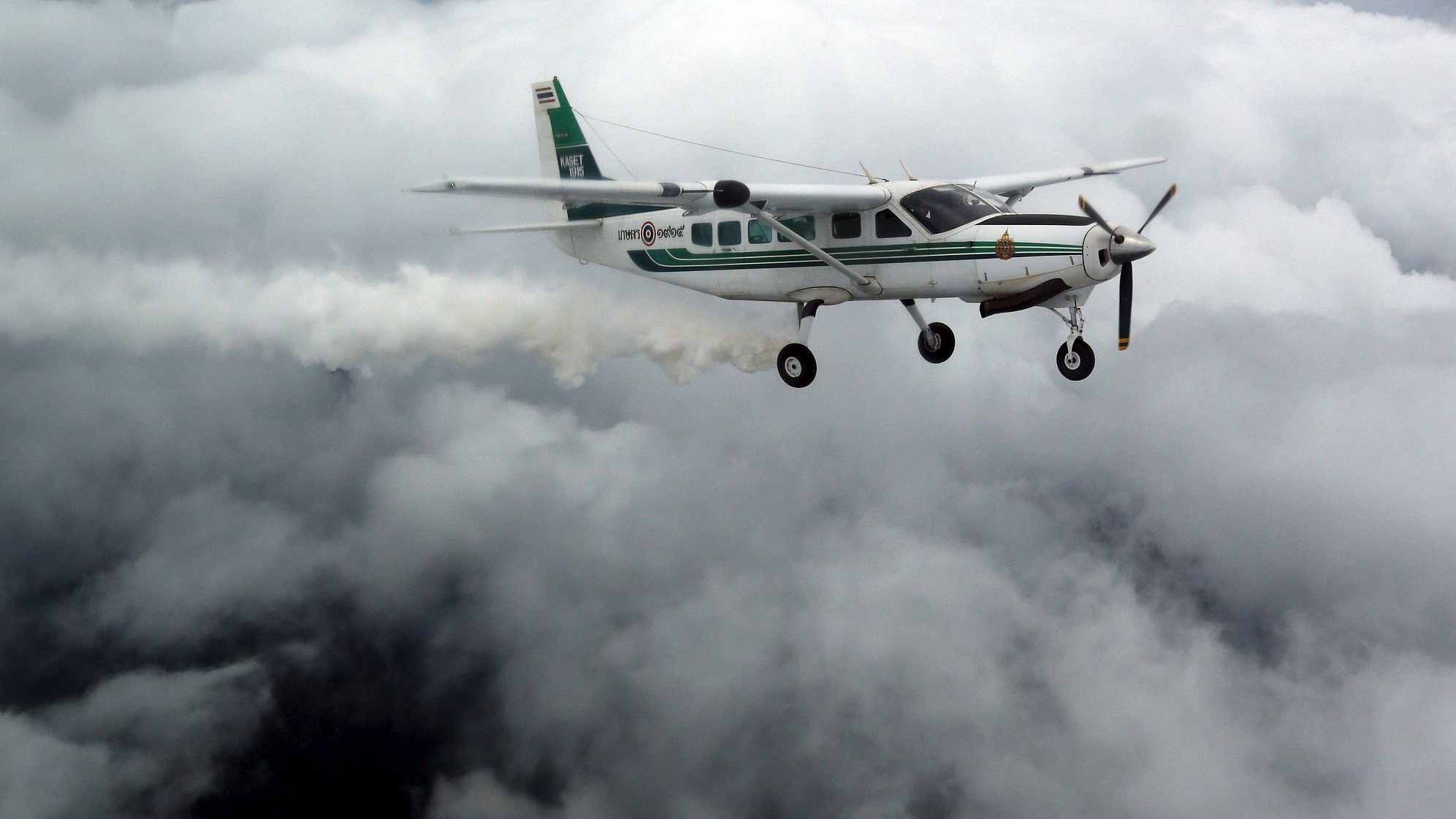 An agricultural aircraft flies over Nakhon Sawan Province, north of Bangkok, Thailand, in a bid to seed clouds, July 9, 2015. At that time, Thailand was suffering its worst drought in more than a decade. (Photo: VCG )

Technological breakthroughs are drawing a big audience at the China-ASEAN Expo (CAEXPO), which opened on Wednesday in the southern Chinese city of Nanning.

Sun Yongtao, from the Shaanxi Zhongtian Rocket Technology Co., showcases the company's rockets – the weather moderating kind that shoots up to the sky and brings down rainfall, adding 10 percent more precipitation at its best. He said the advanced weather moderating technology, a strong suit of China, could be used by ASEAN countries.

Sun told CGTN that China has already popularized the technology in agriculture and environmental protection. "While ASEAN countries are only starting to try it, it could be handy for them. The region is often affected by changeable climates, especially seasonal droughts," Sun added.

Also on display at CAEXPO is China's meteorological satellite technology, which is now able to render CT scans of the atmosphere, with "lightning images" of two milliseconds.

It's another example of cutting-edge Chinese technology heading for Southeast Asia.

Tang Shihao, of the National Satellite Meteorological Center (NSMC), said that ASEAN countries are often victims of extreme weather, like typhoons. "Such conditions often come fast and are forceful. We can provide the kind of meteorological information that can help. And many have signed up for the service."

The NSMC is behind China's Fengyun satellites.

Technology is a definite keyword at the CAEXPO, as many participants say advanced technology will be what really drives growth in the future.

Arlinda Imbang Jaya, Indonesia's trade ministry's export development director general, said China and Indonesian companies have signed letters of intent regarding the CAEXPO to build a high tech industrial zone in Indonesia, incorporating the latest technologies and investment of as much as five billion US dollars on the project expected from Pacific Construction Group and Pt. Famindo Internasional Sentral Teknologi.

"China has been a leader in various fields, and we also have complementary strengths," she said.

The 15th China-ASEAN Expo, which runs until September 15, highlights trade and investment among China, the Association of Southeast Asian Nations (ASEAN) and other countries along the Belt and Road.