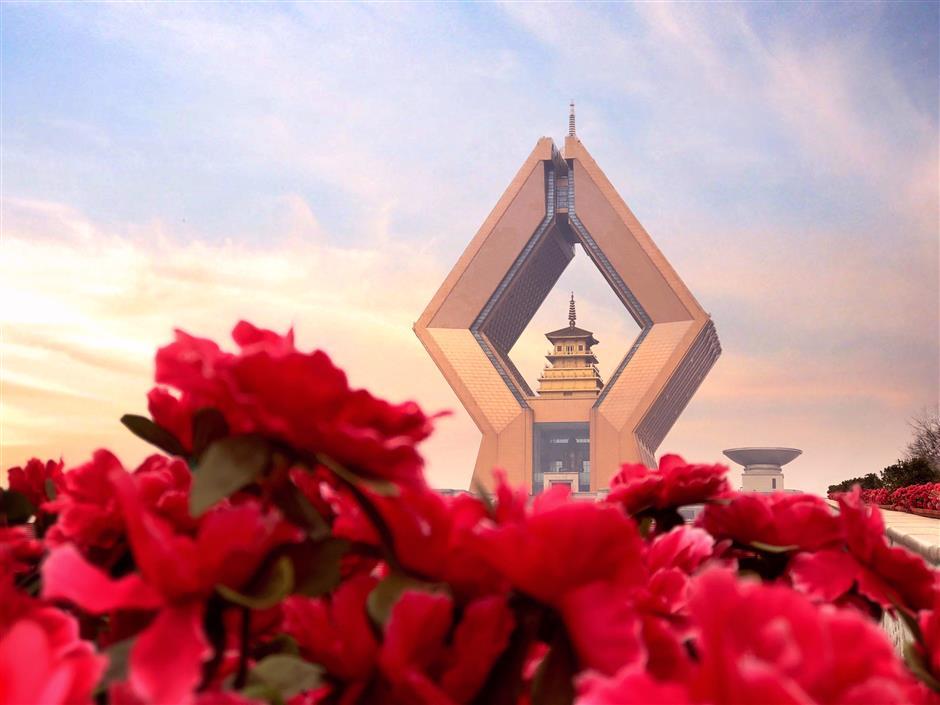 About 110 kilometers away from Xi’an in Fufeng County stands Famen Temple, a Buddhist shrine first constructed in AD 68. (Photo: Shine.com)

One night in the autumn of 1981, a flash of lightening split a Buddhist pagoda and opened up a secret underground world at the same time — a palace that had stored the Buddha Sakyamuni’s remaining sarira for more than 1,000 years.

Xi’an, Shaanxi Province, in the northwest of China, was once the capital city of 13 dynasties. About 110 kilometers away from the city center in Fufeng County stands Famen Temple, a Buddhist shrine first constructed in AD 68.

Revered as the founder of Buddhism, Sakyamuni died in a forest in ancient India at the age of 80. His grief-stricken students then cremated their teacher. The remaining crystalline, after the cremation, “sarira,” was collected and stored separately as “holy relics” by his followers and relatives. The term sarira originally meant body in Sankrit, but when used in Buddhist Sanskrit texts it means relics.

About 250 years after the Buddha’s death, King Ashoka, an Indian emperor of the Maurya Dynasty (c. BC 324-185), ended all tribal wars and united the country. As a pious Buddhist, the king collected Sakyamuni’s relics, divided them into several parts and sent them to different countries for worship, in order to promote the Buddhist religion around the world.

It’s said that a part of the sarira was escorted to China and the Famen Temple was one of its keepers.

A pagoda in Buddhism is a burial chamber, which stores a sarira. In India, it was a tomb, but it started to combine Chinese architectural styles when the religion came to China.

The Famen’s pagoda was once a towering wooden construction, beautifully decorated before the Tang Dynasty (AD 618-907). And the later brick tower rebuilt in the Ming Dynasty (1368-1644) was destroyed in that 1981 thunderstorm.

The fall of the pagoda saddened monks and locals alike, but it finally allowed archeologists to research the mysterious underground palace.

Legend said there was a palace beneath the ground which stored Sakyamuni’s holy relics and other numerous treasures.

In the spring of 1987, the excavation project kicked off, and the archeology team quickly found footings from both the Tang and the Ming dynasties.

Down a 19-step staircase in the south of the footing, experts found a stone door carved with strange patterns. Those patterns still remain a mystery today. Behind the first door, a long narrow path, paved with a thick layer of coins. Thirteen of those coins were made of hawksbill sea turtle’s shell, the first discovery of its kind in Chinese coin archeology.

At the end of the path stood another stone door, flanked by two inscribed steles at both sides, which recorded how the Indian king sent the holy relics to the Famen Temple and the names of later sponsors and donators in the following dynasties.

It was hard to open the second door because it had been greatly distorted by earthquakes and from the pressure of the tower itself. The archeologists crawled through the opening one-by-one in case it collapsed and were astounded by what they discovered.

The palace was revealed inside the second door. Though buried for centuries most of the items were in surprisingly good shape, including a miniature pagoda of King Ashoka, in bold colors, carved with elegant Buddhas, and dressed in big red pants and green belts.

Around the king’s pagoda, countless silk fabrics were piled up like a small hill. Although they had turned maroon after 1,000 years in storage, the fine-spun fabrics were remarkably well kept.

Experts found 780 layers of silk items, as long as 400 meters, in a giant chest. They were all royal garments from the Tang era, including an embroidered dress of Wu Zetian (AD 624-705), the only officially registered female emperor, who obtained supreme power, in China. Only five garments escaped carbonization. Under a microscope it was discovered the garments had been woven by gold threads, each as thin as 0.3 milimeters, which helped resist the erosion of the time.

Deeper into the palace, various gems, jewelry and treasures were discovered, including 121 gold and silver utensils and more then 400 gem stone art pieces.

A 1.96-meter-long gold and silver stick found in the chamber was crowned the “world’s king of sticks.” The rod was made up of 62 grams of gold and 58 grams of silver. At the head of the stick, 12 carved golden loops were linked around a lotus seat.

Who owned the stick? The answer was hidden behind the third stone door, where a batch of olive-green porcelain wares was found. Only an emperor can exclusively use the finest celadon ceramics — Emperor Yizong of Tang.

The fine celadon ceramic making technique has been lost today.

The ancient Chinese were not good at making glass, but 20 glass items with beautiful patterns were unearthed. Archeologists presume they were imported from Islamic countries because of the typical Islamic motifs, which proved that the Tang Dynasty was an international metropolis that welcomed traders from all over the world at the time.

But the biggest highlight of the dig was an arcane parcel that was wrapped up inside a big sandalwood chest. Inside that chest was a smaller golden box, then a silver case, and a jade and peal locker. After opening a total of eight boxes, a small, palm-size gold shining Buddha pagoda was found inside.

With the careful rotation of the top roof, a white-colored tube item popped up. It puzzled experts for a while before they suddenly realized it was the legendary sarira of Sakyamuni. It was clearly recorded on the stone stele that the holy relic “was about 3.5 centimeters tall, jade white, with a clean cut at one end, hollow inside.”

The sarira was actually made of jade and not of Sakyamuni’s bone, which disappointed the team. But disappointment quickly turned into celebration when one archeologist happened to step on another rusty iron box hidden under the dust. After unraveling layer-upon-layer, the parcel was opened to reveal a jade-white finger bone — the real sarira of Sakyamuni. And up to now, it’s the only finger bone of a Buddha that has been found in the world today.