With China's increasing power and influence in the world, the Chinese cultural and entertainment industry is also receiving more and more international attention. 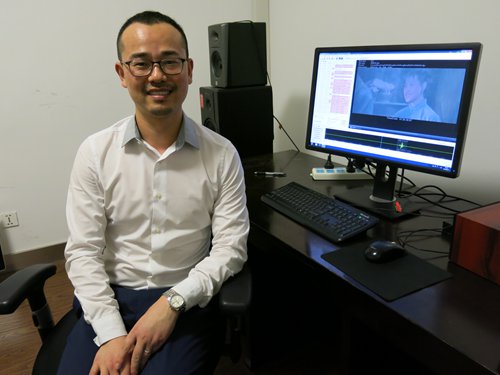 As an indispensable part of Chinese culture, Chinese-made movies are frequently appearing on the international stage, many competing for international film awards in recent years.

However, one of the key factors for Chinese movies being screened abroad is their translation into foreign languages.

"Although native speakers are more proficient in their own language, Chinese movies should be translated [into foreign languages] by Chinese translators who better understand the culture contained in the movies. Excellent English language skills are not enough in translating Chinese movies into English," said 37-year-old translator Zhang Guohui.

Different from other Chinese translators, most who only translate English subtitles of American and British TV shows and movies into Chinese, Zhang translates Chinese subtitles into English for foreign audiences.

He has translated over 400 episodes of various television series and more than 10 movies over the past decade. In 2016, he quit his job as a lecturer at Shanghai Maritime University and became a freelance movie subtitle translator.

"Any of these could compete for international awards if they join in international film festivals," commented Zhang Hui, who thinks that many excellent Chinese movies fail to receive international recognition simply due to their lack of quality subtitle translations.

He stressed that a quality Chinese-to-English subtitle translation should translate customary expressions familiar to target foreign audiences for their better understanding.

"Movie subtitle translations also emphasizes authentication. We should use the language familiar to our target viewers," Zhang said.

One of the difficulties of movie subtitle translators, however, is that sometimes the translator is not allowed to watch the actual movie while translating, out of intellectual property theft concerns. So Zhang must imagine the actors' and actresses' facial expressions and tones while reading and translating their lines from a script.

After he finishes translating the subtitles, the movie producer will bring a DVD of the movie to double-check his translation under the direct supervision of the producer.

Another key point of subtitle translation is that different movie characters with different social statuses should use different sentence patterns to match their unique identities and backgrounds when they speak.

"If you don't have much experience in translating, you would think it is easy to simply translate Chinese conversations into English. But in that case, you are actually ruining Chinese movies," Zhang said.

"Chinese scripts are finely honed pieces of writing. They are not daily life conversations. The dialogues are in colloquial forms but are not simple oral Chinese. They contain deeper cultural connotations," Zhang said.

Moreover, Chinese movie conversations have many subtexts which add a lot difficulty to the subtitle translation. "Sometimes, for example, foreign audiences don't find Chinese comedy movies funny or cannot get the point of a movie, because the translations were not well done," Zhang said.

Born in Central China's Henan Province in 1981, Zhang finished his undergraduate education in translation and linguistics at Beijing Foreign Studies University and The University of Warwick in the UK.

After he obtained his master's degree in language translation at The Chinese University of Hong Kong, he came to Shanghai and worked as a lecturer at Shanghai Maritime University until 2016.

Inspired by his middle school English teacher, Zhang has been interested in watching English movies since he was a student. As a boy, he enjoyed listening to cassette tapes of English movie recordings and imitating the actors' and actresses' lines from the movies.

He once dreamed that he could become an actor or voice actor, and although this never happened, his interest in movies helped him start a new career in movie subtitle translation.

Compared with being a teacher, freelancing is more flexible and gives Zhang more freedom to do what he is truly interested in. He can also obtain a better income in a shorter period of time.

"Of course, there are times when my income is unstable if I don't work consistently. But someone once told me that if you are willing to do something that does not reward you financially, then that should be your career. I think movie translation is such a career for me; I would pursue it even without receiving any money," Zhang said.

According to the latest statistics released by the State film bureau, Chinese box office receipts reached 32 billion yuan ($4.8 billion) in the first half of this year, an increase of 17 percent year-on-year. Among them, Chinese movies now account for 59 percent of the total domestic box office.