Wearing a brightly colored oilcloth apron, 50-year-old Zheng Guoming carefully brushes tung oil on an umbrella cover. Surrounding him are orange oilcloth umbrellas left out to dry, and the area is filled with the scent of tung oil. 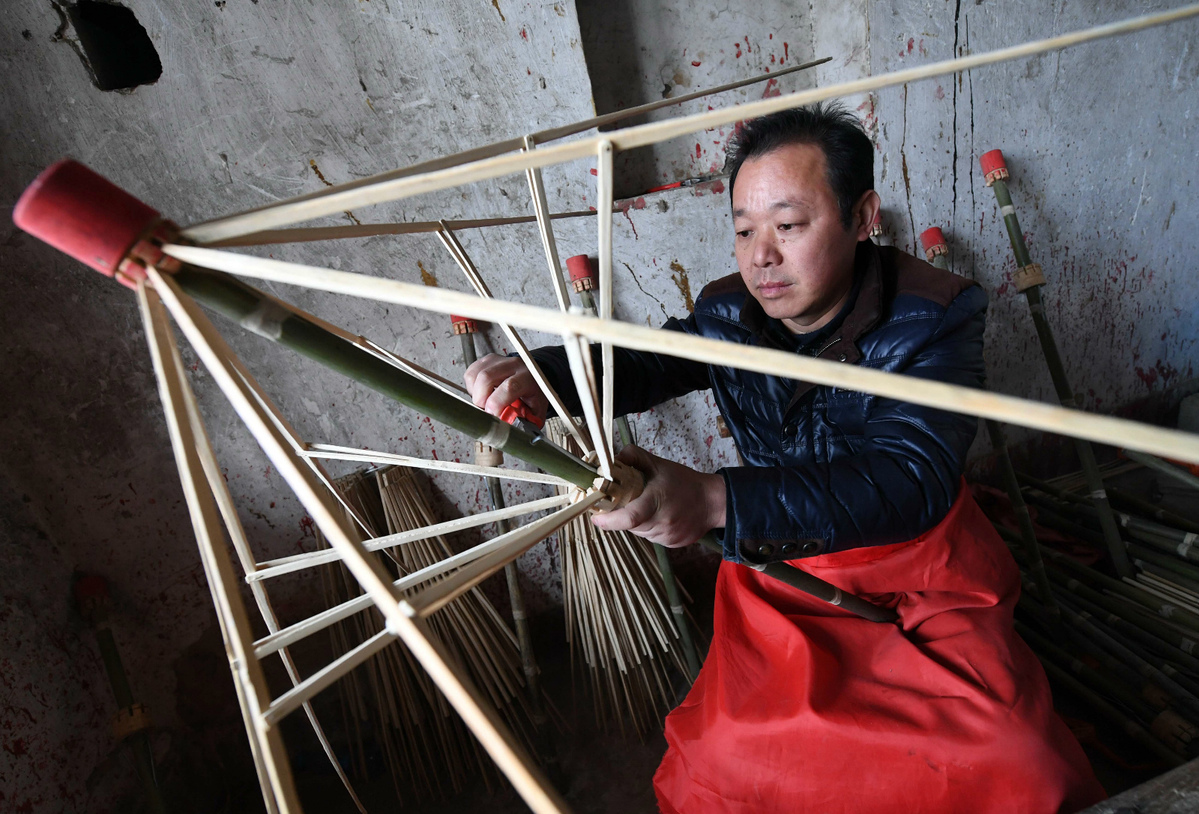 Zheng Guoming makes a bamboo frame for an oilcloth umbrella at the factory. (Photos: Xinhua)

"Tung oil is the key to durability of oilcloth umbrellas," Zheng said, adding that it is necessary to brush carefully and evenly to ensure the umbrellas are glossy.

Zheng is manager of the Guoming Oilcloth Umbrella Factory in Gufeng village, Jing county, in eastern China's Anhui province. He is a sixth-generation inheritor of the ancient umbrella-making craft, which boasts a history of around 1,000 years.

With a canopy made from cotton fabric covered with tung oil - which is made from the nut of the tung tree - oilcloth umbrellas are more solid and durable than oilpaper umbrellas, another kind of ancient Chinese umbrella.

In the beginning, they were mainly used by the imperial family and in rituals. For example, red oilcloth umbrellas were used at wedding ceremonies to ward off evil spirits. Later, they gradually became popular among common people.

"The umbrella has always been a part of my life," Zheng said. "It was so popular when I was a child that I needed to help my parents make umbrellas in my spare time."

He took over the umbrella factory when he was 19.

As a young factory manager in the 1980s, Zheng was taken by surprise when people stopped using traditional umbrellas in favor of modern and more portable foreign umbrellas that swept across China.

"The oilcloth umbrella was out of the market all of a sudden, and our annual demand decreased from 40,000 to just 10,000," he said. "Many umbrella factories quickly went out of business." 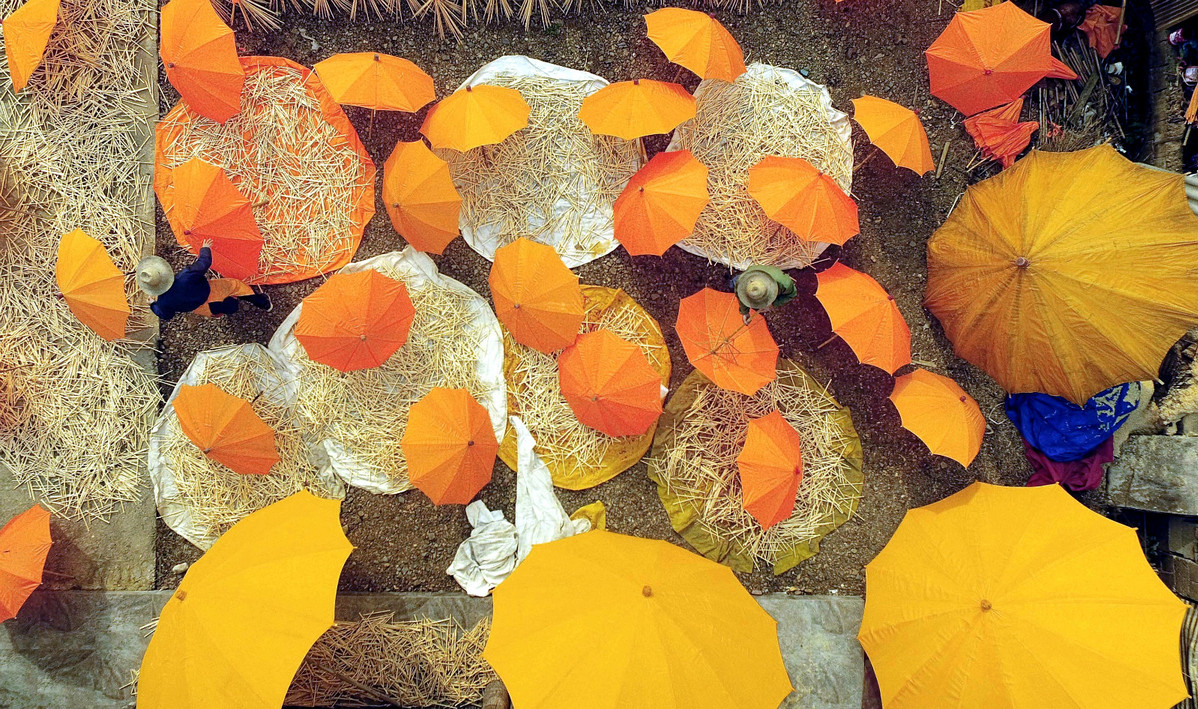 Workers dry oilcloth umbrellas, with their covers being brushed with tung oil at the Guoming Oilcloth Umbrella Factory in Jing county, Anhui province.

By the early 1990s, Guoming Oilcloth Umbrella Factory was the only one left in Jing county. With no other choice, reform was the only thing Zheng could think of. He embarked on reforming the production management system to upgrade product quality and lower prices.

In order to improve durability, Zheng used older bamboo to make the umbrella frame, and improved the tung oil recipe.

"We had to lower the price to seize market share," Zheng said. "Imported umbrellas were sold at dozens of yuan each, while our products were just sold at 5 to 6 yuan then."

He also discovered a niche market created by the emergence of self-employment after the launch of the reform and opening-up in 1978, with large oilcloth umbrellas that could shield peddlers from the sun or rain selling like hot cakes and in short supply.

However, the oilcloth umbrella was still far from its former glory days. Then, a discussion with a client led to a turnaround for Zheng's business. The client was willing to purchase oilcloth umbrellas decorated with a traditional weaving technique called chuanhua, or flower weaving, at a high price.

But the technique is sophisticated and time-consuming, and had been abandoned for a long time.

"It dawned on me that high-quality goods always have a market share," Zheng said. He began to restore the chuanhua technique and focused on making high-end oilcloth umbrellas for interior decoration and as props for films and photo shoots.

Zheng made every effort to upgrade and innovate his products, such as engraving patterns on umbrella handles and painting on the shades. He also customized oilcloth umbrellas to meet individual requirements, making them popular not only in China but also overseas.

"Japanese and Korean clients prefer umbrellas with traditional Chinese cultural elements, such as ancient Chinese poetry, painting and calligraphy, while Dutch clients favor those made from eco-friendly fabric with bamboo handles. They just love it!" Zheng said.

Having finished an order of more than 2,000 environmentally friendly oilcloth umbrellas for a Dutch client, Zheng is now busy with another order from a Canadian client who plans to pay a visit soon to learn more about traditional Chinese oilcloth umbrella culture.

Despite the promising situation, the passing years constantly remind Zheng of the need to pass the inheritance on to the younger generation.

"It's difficult to attract young people into this career due to the long and high-intensity training," he said. "Apprentices need to learn for two to three years to master the whole process."