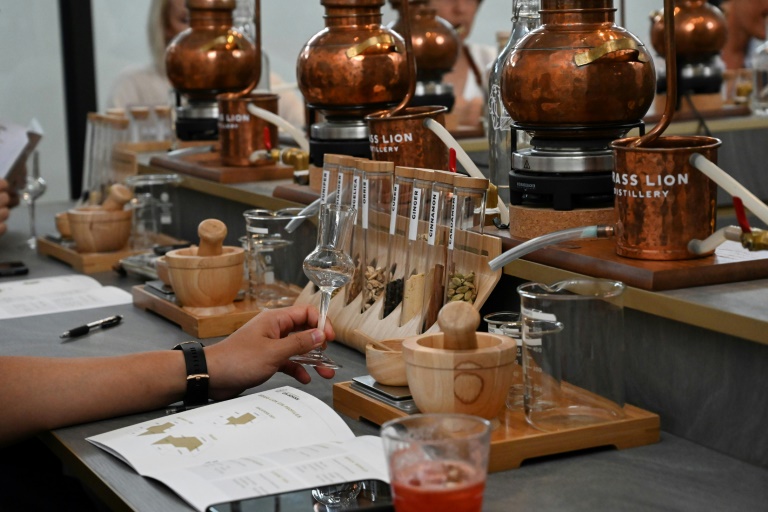 In a Singapore distillery, the smell of pine, citrus and flowers fills the air as students crush juniper berries, blending them with their own choice of ingredients to make custom gin with an Asian twist. (Photo: AFP)

In a Singapore distillery, the smell of pine, citrus and flowers fills the air as students crush juniper berries, blending them with their own choice of ingredients to make custom gin with an Asian twist.

Gleaming copper stills and glass beakers line the counters, and one wall is taken up by a cabinet filled with jars of gin and rows of drawers packed with herbs and spices.

The students are encouraged to get creative and build their own flavour profile -- citrus, floral, herbal, or spicy -- blending classic ingredients such as juniper and coriander seeds with those used in local cuisines.

They are provided with a tray of plants and fruits including tamarind, pandan, and torch ginger flower -- aromatic items commonly used in dishes around Southeast Asia.

Jamie Koh, the founder of Brass Lion Distillery which runs the weekly gin school, said that making gin "allows you to be very creative".

"You can go as little as three botanicals, or you can go crazy and put a million botanicals in it," she said.

Gin typically gets its taste predominantly from juniper berries but then "botanicals" -- the term for the myriad ingredients used as flavourings -- are added to create a wide range of different varieties.

Tonya Shaw, 45, picks up a stem of galangal -- a citrusy ginger-like root -- sniffs it and cuts off a few pieces. She adds them to a tray of ingredients that include lavender and rosebuds.

"I’ve always kind of liked a little citrusy and a little floral, so I based it on my favourite flavour which is Earl Grey," she said.

Using their own, small copper still, they start with a neutral base spirit and redistill it with their custom mix of botanicals, then add water to the end product to reach the desired alcohol level.

Like elsewhere in the world, interest in ever more inventive gin flavours has been rising in Singapore, which is home to a vibrant bar scene.

The affluent city-state's growing array of watering holes and eateries has helped it to shed -- at least a little -- a long-held reputation as staid and dull.

After the students make their spirit, it is bottled and taken to the bar, and then used to make them a gin and tonic. The class costs Sg$198 ($145), and students take home a 500 millilitre bottle of their creation.

"I wanted to try a Singapore flavour," the 30-year-old told AFP.

"It’s got the wasabi effect -- it shoots up into my nose."