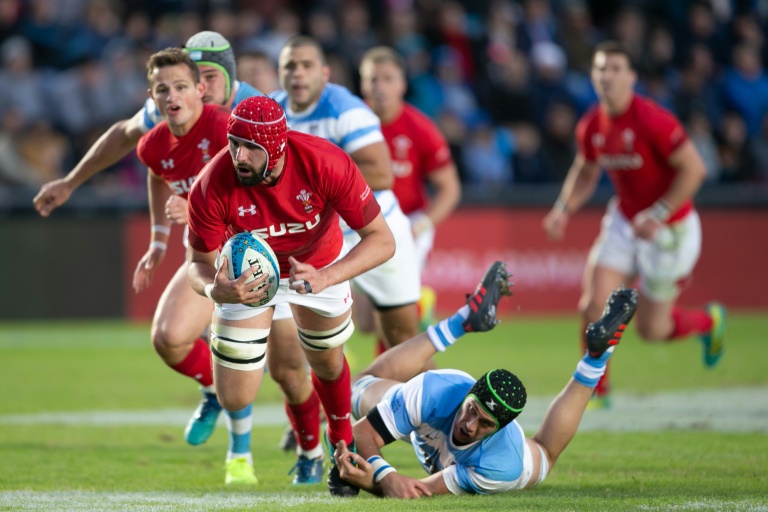 Cory Hill is in the Wales squad despite his fractured leg (Photo: AFP)

Cory Hill was selected for Wales' 31-man World Cup squad despite suffering from a leg fracture.

Hill has not played since February and could be unavailable until halfway through Wales' pool schedule.

The Dragons lock captained Wales in two Tests against Argentina last year and head coach Warren Gatland has selected him for the tournament in Japan in the hope he can feature in the latter stages.

Fly-half Rhys Patchell was also included in the squad following his try-scoring performance in the 22-17 warm-up defeat by Ireland in Cardiff on Saturday.

Gatland's group will be captained by Alun Wyn Jones, but those players who miss out include surprise omissions in props Rob Evans and Samson Lee.

Jones and company learnt of the selection via a video produced by the Welsh Rugby Union when each player was told by a member of their community club that had been chosen.

It will be Jones' fourth World Cup, with wing George North and hooker Ken Owens featuring in the tournament for a third time.

There are call-ups for Saracens prop Rhys Carre, who made his Test debut against Ireland, and flanker James Davies.

Gatland has opted for a split of 13 backs and 18 forwards, which includes three centres, two fly-halves and five props.

"Selection is always the toughest part of the job and that is especially true come World Cup time," Gatland said in a statement.

"Reducing the squad down to 31 has been extremely hard especially when you look at the depth we have created and the amount of the work the training squad have put in, for some, 14 weeks of training.

"We are really happy with the final 31, we feel there is an excellent blend to the squad, in terms of talent, experience and age profile and we are all incredibly excited about heading to Japan and what lies ahead.

"These players have performed and delivered for Wales and deserve the opportunity to represent their nation at the game's showpiece tournament."

Gatland applied the final selection touches during a three-hour meeting on Saturday, with around half a dozen places believed to have been at the centre of their debate.

The tournament will be Gatland's farewell from a role he has filled since 2008, during which time Wales have won four Six Nations titles, three Grand Slams and reached a World Cup semi-final.