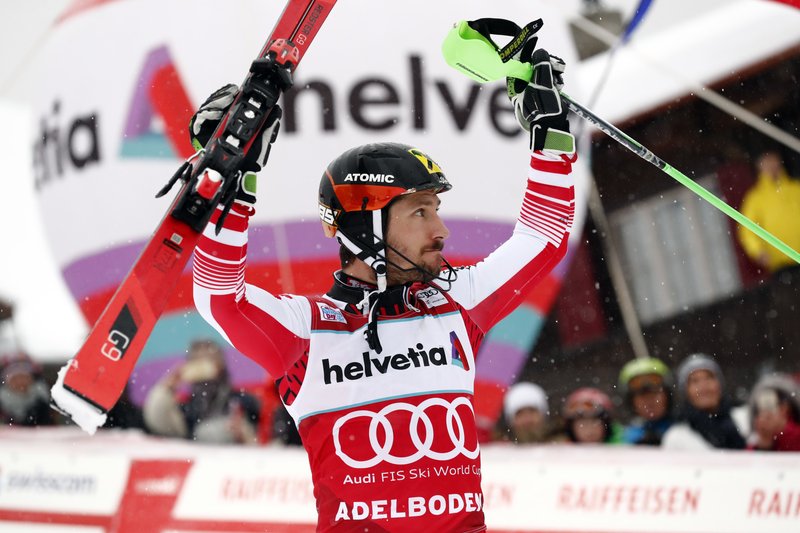 Once more in his stellar career, Marcel Hirscher was racing against Alpine skiing’s history book on Sunday.

The Austrian great almost inevitably won a World Cup slalom, his ninth victory at Adelboden, to set a men’s record on the 52-year circuit for most wins by one skier at a single venue.

“It is really a special place,” said Hirscher, who noted he got his first World Cup top-10 finish at Adelboden as a teenager in the January 2008 slalom.

The Chuenisbaergli slope, a snow-covered cow pasture, was an original World Cup venue in January 1967 and its race winners’ roll reads like a list of Alpine ski greats.

Hirscher’s latest Adelboden win was earned with a second-run charge to victory for the second straight day, and through steadily falling wet snow that affected visibility.

Third-fastest in the morning, Hirscher was quickest in the afternoon to finish 0.50 seconds ahead of Clement Noel. The 21-year-old Frenchman got his first career podium finish.

Henrik Kristoffersen trailed Hirscher by 0.71 in third, one day after letting a first-run lead slip when runner-up to Hirscher in the classic giant slalom.

“When Marcel is at the level that he is in at the moment, I couldn’t beat him with those mistakes,” Kristoffersen said.

Hirscher, if he stays free of injury, is making a procession of his pursuit of a record-extending eighth straight overall World Cup title, just as two-time defending champion Mikaela Shiffrin is dominating the women’s title race.

He swept the weekend races at Adelboden for the third time in his career, and in back-to-back years.

Hirscher’s ninth career win at the storied Swiss hill lifted him over two racers who have won eight times at one venue: Ingemar Stenmark at Madonna di Campiglio, Italy, in the 1970s and ’80s and Aksel Lund Svindal in Lake Louise, Canada, since 2005. Hirscher has also won eight times at Alta Badia, Italy.

With 67 career World Cup wins — including nine already this season — the 29-year-old Hirscher is maintaining a pace to threaten Stenmark’s all-time mark of 86 wins.

Hirscher earned 100 World Cup points and is 405 clear of Kristoffersen in the overall standings. A five-time winner of the slalom discipline title, Hirscher is now 158 points clear of Daniel Yule of Switzerland, who placed eighth Sunday.

Switzerland’s Tanguy Nef placed 25th, one day before returning to the United States to attend classes at Dartmouth College. The 22-year-old Nef was the NCAA champion in slalom last season.

For the second straight slalom, Hirscher’s Austrian teammate Marco Schwarz wasted his first-run lead and was disqualified for straddling a gate.

Hirscher’s scheduled return to action is next Sunday in slalom at nearby Wengen, which stages an Alpine combined event Friday and the classic Lauberhorn downhill on Saturday.