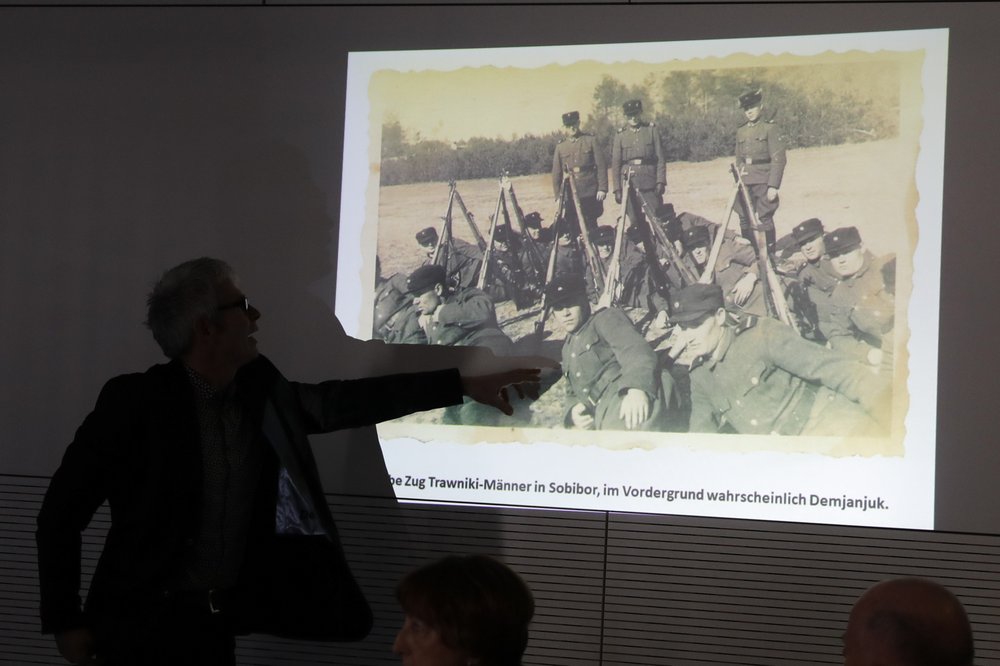 Historians have presented a collection of photos kept by the deputy commander of the Nazis’ Sobibor death camp that they say appears to include images of John Demjanjuk, the retired Ohio auto worker who was tried in Germany for his alleged time as a Sobibor guard.

The collection unveiled Tuesday at Berlin’s Topography of Terror museum comprises 361 photos as well as written documents illustrating Johann Niemann’s career. Niemann was the deputy commander of Sobibor from September 1942 until he was killed on Oct. 14, 1943, in an uprising by Jewish inmates.

Unlike in many other cases, the photos were not destroyed after World War II in fear of legal proceedings, and they remained in the possession of Niemann’s family. The collection is being handed over to the US Holocaust Memorial Museum.

Experts say the collection enhances historians’ knowledge of what Sobibor looked like. So far, they knew of only two photos taken of the camp while it existed. The Niemann collection adds another 49.

Anne Lepper, whose grandparents were murdered on arrival at Sobibor from the Netherlands in 1943, said it was “very courageous” of Niemann’s descendants to release the photos. She said it was “a breathtaking experience” to see the images after frequently having seen the site.

The collection may also shed more light on Demjanjuk, who was convicted in 2011 as an accessory to murder on allegations he served as a Sobibor guard. Demjanjuk always denied the accusations and died in 2012 before his appeal against the ruling by a Munich court could be heard, making the verdict not legally binding.

Two photos in the collection may depict a young Iwan Demjanjuk, as he was known before anglicizing his name to John, among other former prisoners of war who were trained at an SS camp and were deployed at Sobibor, according to historians. If they do, they would be the first to prove that he was at the camp.

Martin Cueppers, a Holocaust historian at the University of Stuttgart, said researchers concluded that Demjanjuk is “probably” depicted at least in one case in conjunction with the criminal police office in Germany’s Baden-Wuerttemberg state, whose biometric department agreed to examine the historical photos.

But Demjanjuk’s son, John Demjanjuk Jr., said of the newly unveiled photos that “it’s a baseless theory to claim they prove anything at all regarding my father.”

The collection as a whole is “of significant historical value” regarding the Holocaust and Sobibor, he said in a statement emailed to The Associated Press. But “the photos are not proof of my father being in Sobibor and may even exculpate him once forensically examined.”

The Ukrainian-born Demjanjuk was a Soviet Red Army soldier captured by the Germans in Crimea in 1942. He was accused of agreeing to serve as a “Wachmann,” or guard, the lowest rank of the “Hilfswillige,” former POWs who were subordinate to German SS men, and training in a camp known as Trawniki.

The Munich court said the evidence showed he was a part of the Nazis’ “machinery of destruction” and served in Sobibor from March 27, 1943, until mid-September that year.

Integral to the prosecution’s case was an SS identity card that allegedly shows a picture of a young Demjanjuk and indicates he trained at the SS Trawniki camp and was posted to Sobibor.

Though court experts said the card appears genuine, Demjanjuk’s defense attorneys argued it was a fake produced by the Soviet KGB.

The prosecution also produced evidence including transfer lists indicating a guard named Demjanjuk with the same Trawniki number was sent to serve in Sobibor and elsewhere, but there was never any photographic proof he was there.

Between March 1942 and October 1943, about 167,000 people were killed at Sobibor, almost all Jews, according to the US Holocaust Memorial Museum. Following the 1943 uprising, the Nazi guards shot the remaining prisoners and razed the camp in occupied Poland.

Demjanjuk always maintained he was a victim of the Nazis; first wounded as a Soviet soldier and then captured and held as a prisoner of war under brutal conditions before joining the Vlasov Army, a force of anti-communist Soviet POWs and others formed to fight with the Germans against the Soviets in the war’s final months.

If the newly surfaced photographs turn out not to picture Demjanjuk, it wouldn’t be the first time his identity has been mistaken.

In the 1980s, Demjanjuk stood trial in Israel after he was accused of being the notoriously brutal guard “Ivan the Terrible” at the Treblinka extermination camp. After Treblinka survivors identified him as their tormentor, he was convicted and sentenced to death — but then freed when an Israeli court overturned the ruling, saying the evidence showed he was the victim of mistaken identity.