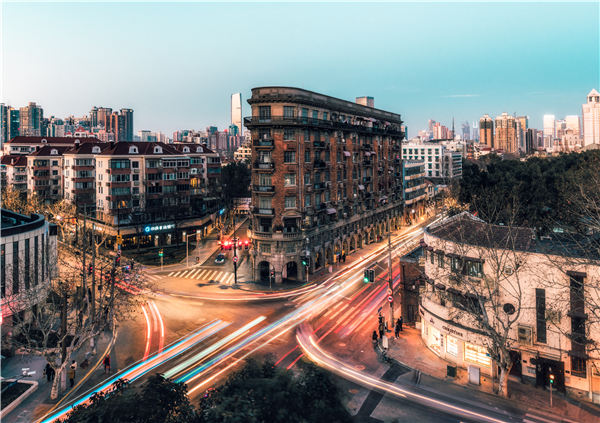 Wukang Building (center) at the junction of Huaihai Middle Road and Wukang Road is one of the most celebrated historical landmarks of Shanghai. (Photo : China Daily)

As an old mansion draws crowds, local officials weigh in with advice.

The Wukang Building at the junction of Huaihai Middle Road and Wukang Road in Shanghai has become such a sensation on social media that photo fanatics have been causing road safety problems.

Built in 1924, the eight-story mansion is one of the most celebrated historical buildings in the former French concession in Shanghai. It was one of many landmark buildings created by Hungarian architect Laszlo Hudec and has been home to many celebrities over the decades.

Earlier this year, a new municipal project saw the removal of two utility poles in the vicinity, allowing people a clear view of the building's unique ship-shaped facade without the cables and wires that were previously seen. This development has since drawn hordes of visitors to the site, with many even standing in the middle of the busy junction to take selfies with the building in the backdrop. Traffic is busy around the site, with scooters and electric bikes frequently speeding by in large numbers.

A policeman who has been warning pedestrians to cease such actions was quoted by Shanghai-based Xinmin Evening News as saying: "Sometimes I lose my voice from all the yelling, and there are still too many of them.

"We understand people's pursuit for beauty and love for cultural heritage, but we do hope people observe the rules for their own safety."

The tourism administration of Xuhui district has suggested a better way to appreciate the beauty of Wukang Building and other historic constructions in the area-participating in its monthly tour that takes place on the first Saturday of every month.

Xuhui district set up its public service office for tourism at 393 Wukang Road, the former residence of a nationalist revolutionary named Huang Xing (1874-1916), in 2010.

Since then 89 lectures have been held in the mosaic-floored main hall of the art deco-style residence, which was built in the 1910s. Art deco is a style of visual arts, architecture and design started in France in the early 20th century. More than 10,000 people have made reservations online or by phone to hear the stories about these old buildings shared by authors, artists and actors.

"As there are 37 historic buildings protected by the municipality along Wukang Road, we wanted to introduce the heritage to the public. That's why we launched the monthly tours and lectures in 2011," says Kong Xiangshen, head of the public service office.

The latest session took place on March 2, when Shanghai-based author and cultural critic Wang Weiming spoke about the building.

Shanghai has many historical buildings dating back to the late 19th century and early 20th century. They first mushroomed in the Bund area before expanding westward as the international settlement, Wang says.

Fonciereet Immobilliere de Chine, a company funded by the International Savings Society, bought the piece of land in 1923 at the junction of Route Ferguson-the former name of Wukang Road-and Avenue Joffre, which is today known as Huaihai Middle Road. Hudec later designed a wedge-shaped building to fit this plot of land.

Wukang Building was originally named after a battleship from the World War I period-Normandie Apartments.

"It is a beautiful mansion. You will feel the rhythm of the structure by simply looking at the columns of the arcades from across the street," Wang says.

Wukang Building has a height of 30 meters and occupies a land area of 1,580 square meters. There were originally 63 apartments, 30 servants' rooms and three elevators. The ground floor consists of shopping arcades while the top level features a long corridor that goes around the whole building, giving residents a good view of the city.

Today, the building is still a private residence and its interior is not open to tourists. However, one can still step into the Cottage Cafe or read a book in the Dayin Book Mall located in the arcade.

Kong says there are many cafes on the block because such businesses do not require extensive renovation that could affect the building.

"Wukang Road has developed a casual laid-back commercial atmosphere and some shops enjoy great popularity on social media. For three consecutive years, we have had an annual coffee festival on our block in December, and people loved it," he says.