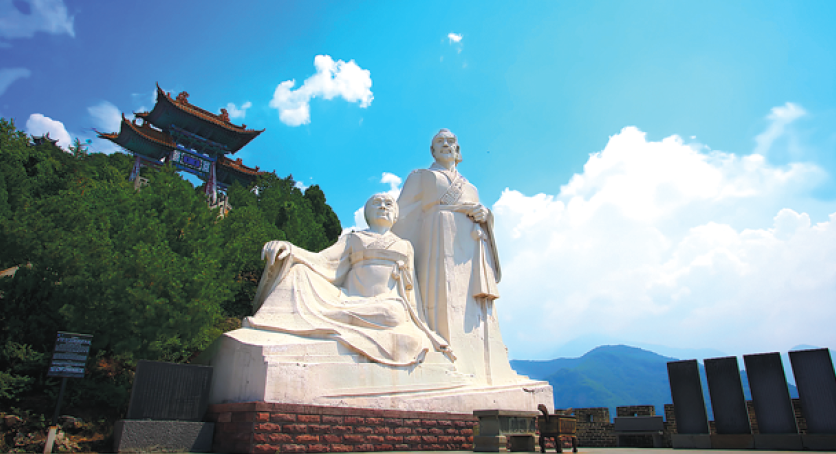 The statues of Jie Zitui and his mother in the Mianshan Mountain scenic area. (File photo)

When Qingming Festival－or Tomb Sweeping Day－is approaching, many people might not know the event is closely associated with another festival called Hanshi, or Cold Food Festival.

Both festivals originated from a tragedy that happened in Shanxi more than 2,500 years ago. At that time, during the Spring and Autumn Period (770-476 BC), the location was called the Jin Principality.

Cold Food Festival is a traditional Chinese holiday celebrated for three consecutive days before Qingming Festival, which falls on April 4 and 5.

Legend has it that Chong'er, a prince of Jin, endured many hardships while he moved around the warring states. Once, when the prince was tormented by hunger, Jie Zitui, one of his supporters, offered him food.

Later, when Chong'er became the duke of Jin, he ordered a search for Jie who had gone into hiding in the remote mountains with his mother. The duke wanted Jie to serve as one of his ministers.

Jie, who preferred to be a hermit in the Mianshan Mountain in today's Jiexiu city of Shanxi, had no political ambitions and refused the duke's invitation. Chong'er ordered the mountain to be burned down to force Jie out of hiding. Unfortunately, Jie did not give in and the fire ended up killing him and his mother.

Filled with remorse, Chong'er ordered that during the three days around this tragic anniversary the setting of fire be forbidden. This meant all food was eaten cold. Therefore the festival is thus named.

The days following Cold Food Festival were dedicated to sweeping the tomb of Jie and later developed into a national holiday called Qingming.

Mianshan Mountain, where the tragedy happened, is now a renowned tourist destination in Shanxi province.

In many areas of Shanxi, locals still remember this tradition. Although cold food is not the only option for people during the celebration, the practices of making typical cold dishes for the event have been preserved.