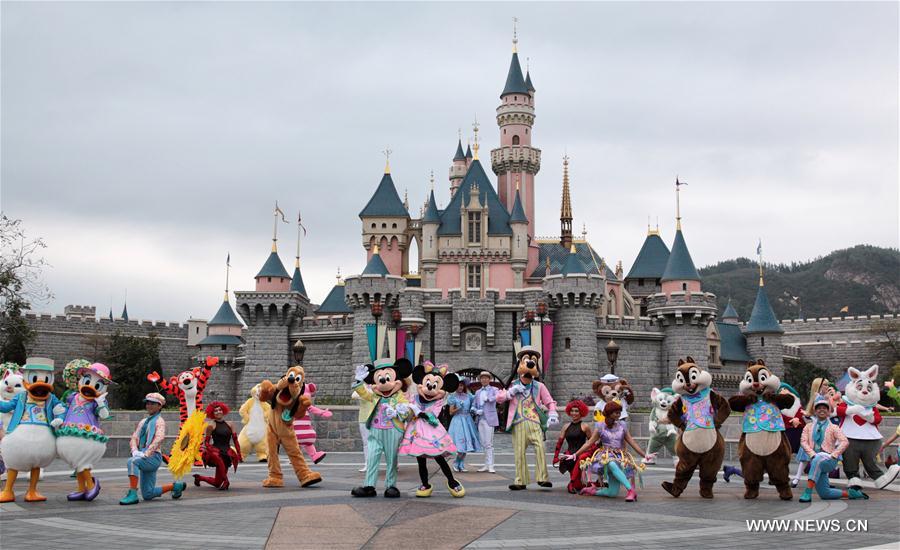 Disney characters appear before a castle in Hong Kong Disneyland before a Springtime Carnival which will kick off Thursday in Hong Kong, South China, March 15, 2017.  (Photo: Xinhua)

At a promotion event on Monday here, the theme park's culinary team presented their specialties for 2020, including cuisines and desserts featuring Disney movies, Chinese dishes suitable for family meals and afternoon tea selections with cocktails and snacks to attract local visitors.

Mak Kam Kui, executive chef of the Hong Kong Disneyland Hotel, said that compared with last year, tourists from the Chinese mainland and other areas declined sharply. "We do hope to attract more visitors to enjoy our food next year."

One can notice something is off: No traffic jam on the expressway to Disneyland. No long lines in the park.

Due to the drop of visitors, many restaurants and rides in the park were closed and the classic night parade performance has been suspended for nearly two months. It also canceled the New Year's Eve countdown party over concerns of the unrest's effect on transportation.

According to the Hong Kong Tourism Board (HKTB), only 11.9 million visitor arrivals have been recorded in Hong Kong during the July-September period in 2019, down 26 percent year on year, the sharpest decline in 16 years. The number of tourist arrivals dropped further by around 40 percent year on year in October.

Anita Lai, vice president of communications and public affairs of HKDR, said that the total visitor arrivals in Hong Kong have been dropping and the theme park's business was also depressed in this environment.

HKDR will mark its 15th anniversary in 2020, said Lai. "We do hope to receive more visitors to our park next year."