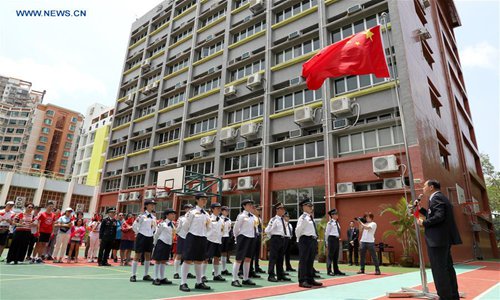 Hong Kong parents and educators praised the move out of concerns that biased classroom materials and teacher opinions can have a negative influence on students.

"Many underage students in my school were incited to take part in the violence during the street protests, and it is obvious that teaching contents containing pro-secession rhetoric partly contributes to this," said Tulip, a Hong Kong high school teacher who requested anonymity when speaking with the Global Times.

"My kid is going to middle school next year. I don't want him to read the contents inciting violence," said one netizen. Others said they were "absolutely supportive."

Yung has stressed the need to censor biased and inaccurate teaching materials. Pro-establishment legislator Horace Cheung Kwok-kwan suggested on Friday that teachers are allowed to hold political opinions but they should not influence their students.

Cheung said he had received complaints from parents on the biased classroom materials, and yet the schools were without a censorship mechanism.

Secretary for Education, Kevin Yeung said the bureau can't review all teaching materials used in Hong Kong, so it relies on each school to ensure that education materials are used professionally, Radio Television Hong Kong reported.

As a campaign to end violence is underway, calls from teachers and parents to examine school curriculum is growing, Tulip also said.

Legislator Ann Chiang Lai-wan called for efforts by authorities when considering over 2,000 student protesters from over 300 primary and secondary schools had been arrested, including a 12-year-old.

Heung To Secondary School (Tseung Kwan O) principal Tang Fei argued previously that there was almost a complete absence of supervision on school curriculum from the education bureau.

Tang emphasized that the education bureau should provide schools with better guidance on classroom content standards.