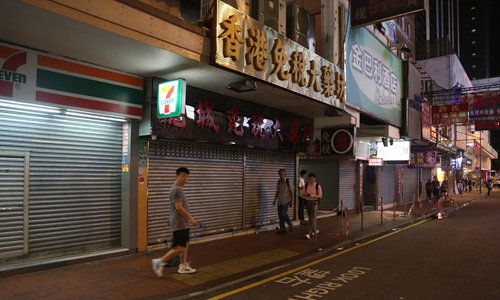 Pedestrians wthe alk pass stores in the usually-bustling streets of Tsim Sha Tsui, Hong Kong. Many stores in region were forced to close early due to the violent protests of opposition forces. (Photo: Global Times)

Hongkongers are facing what is likely to be a cheerless Mid-Autumn Festival, an occasion for celebrating family reunions which falls on Friday, as many are unlikely to go out for dinner due to radical protests, some local residents and business representatives said.

Several local residents told the Global Times on Sunday that they may not go out for dinner, which is a widely accepted way Hong Kong people celebrate the traditional holiday. Several people from the catering sector told the Global Times that their business has already been badly impacted.

"We have only received a few reservations for family feasts during the Mid-Autumn Festival, very different from the same period last year," an employee of a Chinese restaurant located in Causeway Bay, Wan Chai district told the Global Times on Sunday. If the protests continue right up to the festival the restaurant expects customers to cancel their reservation, said the employee.

An employee of a hot pot restaurant which is also located in the district said they were losing money.

"Hot pot is popular among local residents and mainland tourists, but we have lost more than half of the customers as the protesters sometimes pass by the restaurant making customers worried about their safety," the employee told the Global Times.

The employee said her boss may have to permanently close the restaurant if the chaos continues.

Hong Kong has been rattled by anti-government protests over the past two months, which have escalated into violent riots. Some stores in areas such as Causeway Bay, Tsim Sha Tsui and Mong Kok have only recently welcomed the return of customers after rioters vandalized public property, disrupted transportation and the lives of common people, causing serious impact on sectors like retail and catering.

During months-long protests, some 20 restaurants have shut down, more than when the SARS epidemic hit Hong Kong, causing an economic downturn in 2003, according to industry association Eating Establishment Employees General Union.

According to a survey by the union of more than 500 employees in the catering business, 98 percent of the respondents said their business has been affected, and 47 percent said revenues dropped over 30 percent year-on-year this summer, according to a statement the union sent to the Global Times on Sunday.

Kwok Wang Hing, chairman of the union, told the Global Times on Sunday that many restaurants have not received Mid-Autumn Festival dinner reservations yet, as residents have concerns that "public transport may be disrupted by social unrest and they may not be able to get home after dinner."

Areas where popular restaurants are located have become a major target of rioters. Some restaurants have countered with discounts and free drinks, according to media reports.

"There will be a long-term impact on the local economy, as illegal activities have also damaged the city's reputation as a society ruled by law,"  Francis Lui Ting-ming, former director of Economics Department at Hong Kong University of Science and Technology, told the Global Times on Sunday.

An anonymous mainland resident working in Hong Kong told the Global Times that she now doesn't often hang out with friends on weekends. Instead, she prefers to stay at home in Hong Kong or travel to Shenzhen or Guangzhou in South China's Guangdong Province to avoid encountering protesters.

"I don't want to take any security risk," said the resident.