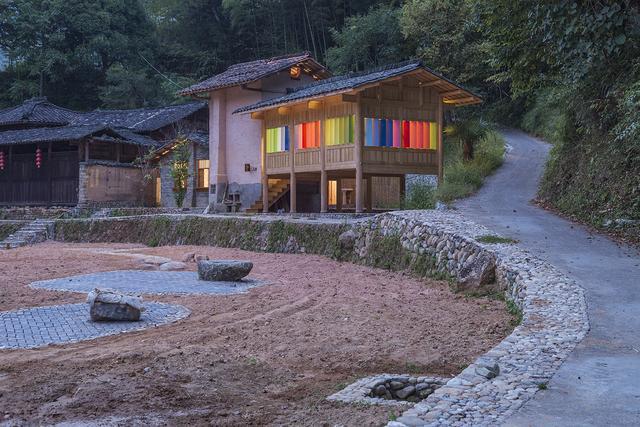 FUZHOU, May 21 (Xinhua) -- Like many Chinese migrant workers, Yang Qiaoxing has jumped on the bandwagon of leaving his obsolete rural bungalow for life in the city. However, what he did not know was the stinky cattle pen in his backyard in east China's Fujian Province was turned into a book bar.

In Shangping village, Xiyuan Township, it is not only Yang's cattle pen but nearly every livestock enclosure, barn and rundown kitchen have been rehabbed into wooden houses used as bars, shops or recreation areas in the impoverished village's efforts to spearhead rural transformation.

Comfy couches offer people a place to pass the hours getting lost in the stores of books neatly organized on the shelves. If it was not for the brick fence on the first floor, Yang would never be able to recognize the transformed nook which was once his cattle pen.

"I got a phone call from the Party chief in the village committee three years ago telling me the village's plan to make use of obsolete structures for renovation to better suit its overall tourist development," said Yang, who has seldom returned to the village.

He said he now leases his cattle pen, earning 200 yuan ($29) a year in rental income from the village's operation of the book bar.

Nestled in the mountains between the provinces of Fujian and Jiangxi in eastern China, Shangping Village boasts a history of over 1,000 years. There are 26 provincially-recognized historical sites, which used to be mansions, gardens and memorial arches of big family clans in the village.

Yang said the village was left behind during the modernization. In 2016, there were only 100 people in the village compared to a population of over 700 before, as people left the village in search of a better life.

The village environment was a factor that pushed young people away. Sewage used to flow freely on the ground and messy electric wires hung in the air like spider webs, not to mention the stinky animal pens, Yang said.

The village's campaign for tourist development was unleashed via a government-sponsored poverty alleviation project in 2016 when the township government invited architecture experts from the Central Academy of Fine Arts and Tsinghua University to help roll out the sketch of a tourist village based on Shangping's resources.

Zhou Bin, Party chief of Xiyuan Township, said as a planned tourist attraction, Shangping must have tourist facilities and upgraded infrastructure such as waste treatment and power lines.

A total of 30 million yuan has been invested in rehabbing obsolete and uninhabited buildings into tourist facilities.

During the May Day holiday earlier this month, the small village received some 2,000 tourists.

As tourists wander in the village, they are amused to find hogpens turned to bars and an old tobacco-making workshop transformed into a teahouse and an exhibition hall of the village's past with old furniture, household items and tools.

Thriving tourism has brought entrepreneurial opportunities, and the village has seen many villagers returning. Now, there are some 300 residents in the village.

Li Zongyan, 31, is one of them. After working in the port city of Quanzhou for years, she came home and started up a restaurant last September.

"Starting up the business at home gives me a perfect balance between family and work," Li said. She receives some 20 reservations for dinner on average a day.

The township official Zhou said a 100-km highway is under construction, which would make traffic to the scenic and historic village more convenient.