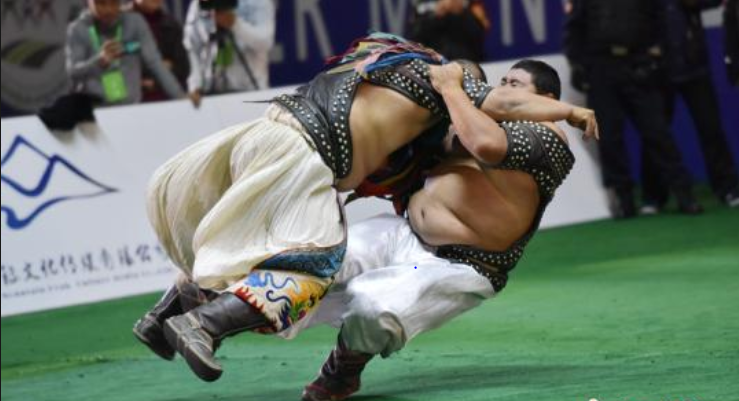 HOHHOT, Dec.1 (Xinhua) -- Ha Ri, with her sapphire nail polish, beat another arm wrestler much taller than her and claimed her prize - a plush toy - at an arm wrestling competition in Hohhot, Inner Mongolian Autonomous Region on Saturday.

"I happened to see the registration information of this tournament in the gym about three days ago. I really hadn't prepared for it at all, and telling nobody about it really made me feel relaxed. Now I can share the news with my best friend," Ha said.

About 200 participants, including males, females and children, took part in the competition. The vast majority of players used their right hands to challenge others. Their left hands, according to the rules, must hold the handle on the table during the whole procedure, while if contestants' right hands touched the decisive cushion on the table, or their right wrists touched below the cushion, he or she would lose the match.

Chewing gum, Ao Damu won his game with ease in the men's professional category, as he pulled off his hoodie and wore just a black vest to do battle.

In the children's competitions, youngsters stood on chairs to reach the table while staff stood besides them to ensure they wouldn't fall. Nine-year-old Yang Haoran wore a big smile as he beat his opponent to advance into next round.

Free entrance for both amateurs and professionals attracted more than expected people to take part in the competition.

"It is beyond our expectation that people from other provinces like Shanxi, Shaanxi, and even Guangdong participated in the competition. Arm wrestling is not as well-known to the public as football or basketball. We organized this event to encourage more people to exercise regularly, including children," said organizer Niu Dongliang.