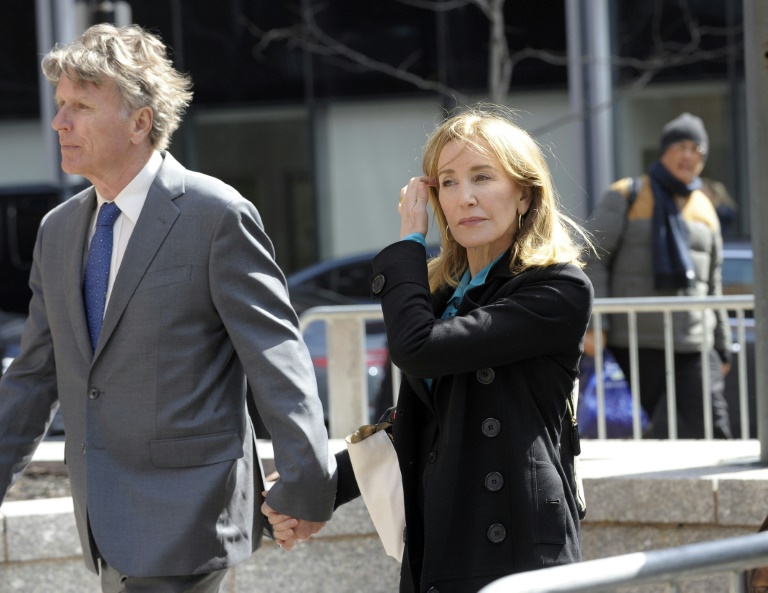 Actress Felicity Huffman did not speak to reporters as she arrived at the federal courthouse in Boston. (Photo: AFP)

Surrounded by a mob of journalists, actresses Felicity Huffman and Lori Loughlin appeared in a Boston court on Wednesday to face charges in connection with a massive college admissions scam involving other celebrities and top industry CEOs.

Huffman and Loughlin, who have remained silent since they were charged in March, arrived separately and said nothing to the reporters outside the courthouse.

Loughlin, known for her role on "Full House," smiled and waved at her fans before entering the building.

The actresses were the most famous of the 50 people indicted in a scam to help children of the American elite gain entry into top US colleges.

The ringleader behind the scam, William "Rick" Singer, who authorities say was paid about $25 million dollars to bribe coaches and university administrators, has pleaded guilty and is cooperating with authorities.

Some of the universities targeted in the elaborate cheating scam include Yale, Stanford, UCLA and Georgetown. None of the schools or the students have been charged in the case.

According to prosecutors, the accused parents paid a firm run by Singer as much as $6 million to cheat on college entrance exams for their children or to bribe coaches to help non-athletic students get scholarships.

The 33 parents in the case have been charged with conspiracy to commit mail fraud, a crime punishable by five years prison.

Huffman has been accused of paying $15,000 dollars to help her eldest daughter get better results in the SAT college entrance exam.

According to the indictment, she and Macy paid for an examiner to correct their daughter's test answers through a phony donation to Singer's foundation. They reportedly agreed in 2018 to repeat the scam for their youngest daughter, although this did not happen.

Loughlin and her husband are accused of paying $500,000 in 2016 and 2017 to Singer's foundation so that their two daughters could pose as rowers and join the University of Southern California (USC) crew team.

Thanks to Singer's cooperation, investigators have recordings of telephone conversations and e-mails exchanges with the actresses about the cheating.

No parent has yet pleaded guilty in the case.

There is plenty of speculation about ongoing negotiations between attorneys representing the defendants and the Massachusetts federal prosecutor, which could lead to plea agreements.

Such agreements are common in the US legal system: when investigators have evidence they believe is enough to get a jury to obtain a conviction, defendants are encouraged to at least partially recognize their guilt to avoid an expensive court case that they could lose, with the promise of a more lenient sentence.