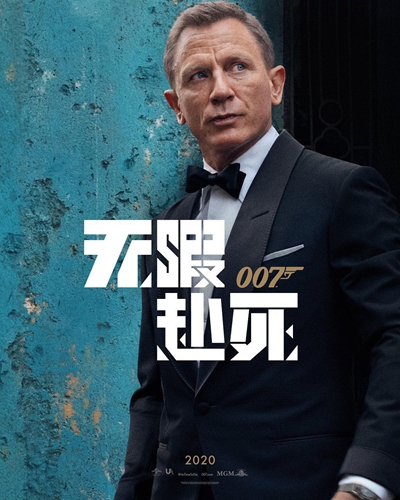 Promotional material for No Time to Die. (Photo: Maoyan)

It was not surprising to hear that actor Daniel Craig canceled his April trip to China to promote his latest James Bond blockbuster No Time to Die, which was looking for the market to help make it the highest-grossing Bond movie to date, according to a report from The Times.

After all, the eyes and attention of the whole world has been focused on the COVID-19 outbreak, which has killed nearly more than 1,800 people in the Chinese mainland.

At this critical moment, China's nearly 70,000 screens have been closed for weeks, leading to losses of more than 10 billion yuan ($1.43 billion) during what is usually the busiest movie season of the year for domestic movies.

For Hollywood movies, this could spell an even bigger disaster as some Chinese films like Lost in Russia and Enter the Fat Dragon have sought out alternate revenue channels by reaching deals with streaming sites.

It doesn't seem far-fetched at this point to predict that No Time to Die and Disney's live-action Mulan remake, both set to release in April, will have to cancel their release dates in the Chinese mainland due to concerns about spreading virus, even if things start to turn around in March.

As the second-largest film market in the world, China is the largest overseas market for Hollywood movies. In 2019, total box office income in the Chinese mainland reached more than 64.2 billion yuan, nearly 20 billion of which was generated by imported movies, mostly Hollywood blockbuster franchises like Avengers, SpiderMan and Fast & Furious.

The question for these studios is what measures they should take when dealing with the Chinese market. For now, one of the most important things is to show support for the people of China and their government by sending the message that they will be able to quickly conquer the virus. I do hope that these studios can do everything in their power to help.

The most practical approach for now is to reach out to Chinese streaming giants to work together on solutions. For now, online entertainment like streaming videos and short videos have become the main means that Chinese people staying at home are using to amuse themselves.

Like more and more Chinese movies have done, going straight to streaming platforms will be a good choice for foreign films as well.