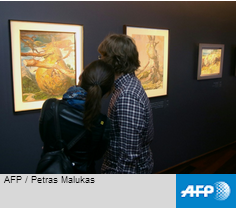 Painter and Holocaust survivor Samuel Bak on Monday opened a museum of his allegorical work inspired by Jewish history in the Lithuanian capital Vilnius, more than half a century after he held his first exhibition as a nine-year-old inside its wartime ghetto.

As a boy he was sent to live in the ghetto after the German Nazis occupied the city in 1941 during World War II.

He survived -- unlike most of his family -- by hiding in a Catholic convent, and fled to Israel after the war with his mother. He now lives in the United States.

"I have lived in so many different countries. But I am from Vilna, I identify myself with this city," Bak, now 84, told AFP, referring to the Hebrew name of the city.

"For me to be here is somehow to come back to the very beginning of the beginning. It is also a possibility to express my gratitude to Christians who helped me survive," he said before the opening ceremony attended by several hundred people.

Bak donated more than 60 of his paintings -- with dozens more to come -- to the Samuel Bak Museum, which will officially be part of the state-funded Vilna Gaon State Jewish Museum.

"Bak's work weaves together personal history and Jewish history to articulate an iconography of his Holocaust experience," said the Pucker Gallery that represents him.

"Across seven decades of artistic production Bak has explored and reworked a set of metaphors, a visual grammar and vocabulary that ultimately privileges questions," the gallery added on its website.

Instead of presenting death directly, Bak uses allegory and substitution, such as showing a child's toys instead of the murdered children who once played with them.

Lithuania's Culture Minister Liana Ruokyte-Jonsson hailed Bak's return to Vilnius as "a testimony that the effort of annihilation does not triumph in the end".

Pre-war Lithuania was home to a thriving Jewish community, with Vilnius a hub of learning known as the "Jerusalem of the North".

Community leader Faina Kukliansky said the museum "will become yet another sign of the extraordinary Jewish cultural heritage in Lithuania and the world".