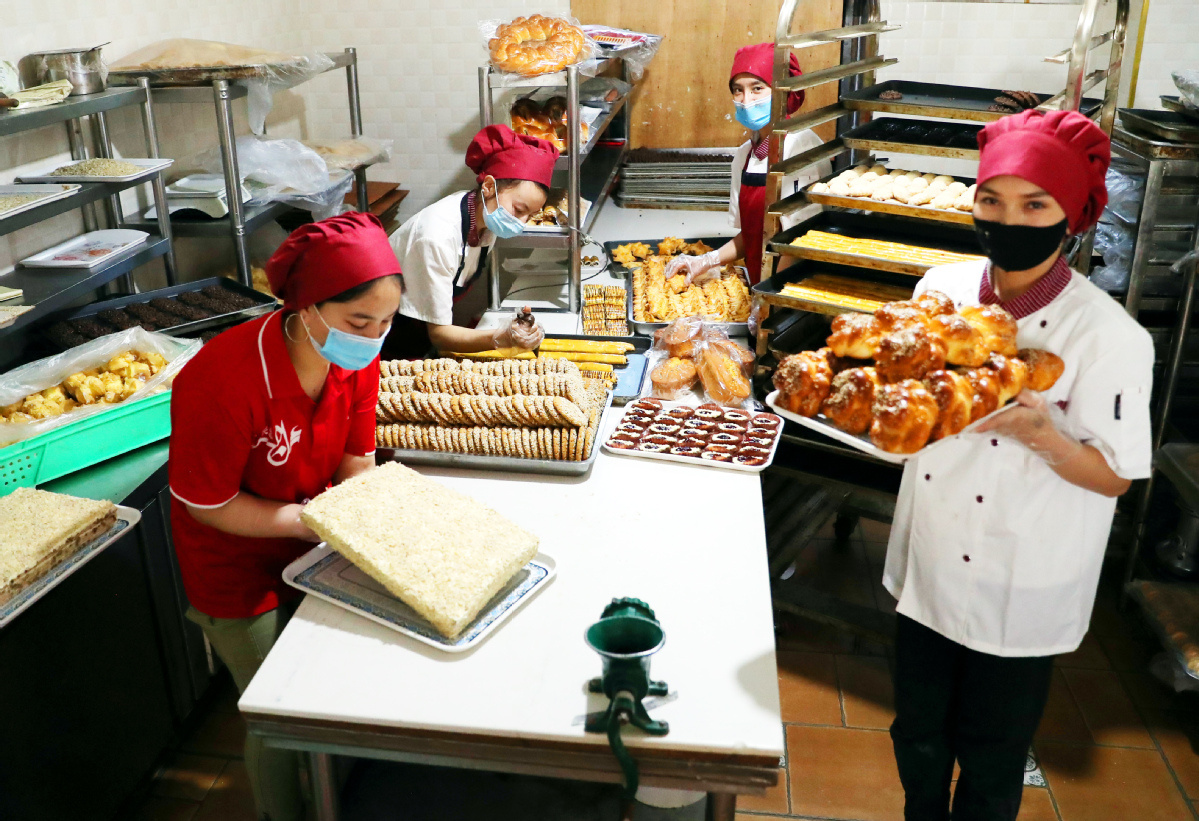 Baking is taking the internet by storm, as people staying at home during the novel coronavirus pandemic look for ways to occupy themselves and reduce stress.

Hospital worker Yan Bo from Yantai, Shandong province, noticed the trend shortly after Wuhan, Hubei province, was placed under lockdown in late January to curb the spread of COVID-19.

On a Sina Weibo account, the 45-year-old, who has been making bread as a hobby for more than 10 years, documents the different types she has produced.

Many people suddenly flocked to the account to learn how to make bread, and Yan now has some 700,000 followers.

"This is no surprise. Baking helps me find peace in a chaotic world, which is a comfort that others can find, especially during this stressful period," she said.

"When I'm in the kitchen, I focus on baking and feel relieved that I can get away from the news, work, relationships and other things."

Yan is clearly not alone. As of Thursday, pages related to "baking recipes" had more than 910 million views on Sina Weibo.

A recent home baking report released by recipe-sharing app Douguo showed that in the first three months of this year, the number of queries made about baking was three times the figure for the same period last year. No precise details were given.

The report found that people in South China prefer chiffon cake, while those in northern areas of the country favor milk bread.

Douguo's co-founder Zhong Feng said that with the pandemic confining people to home, the passion for baking has been unprecedented.

In addition to increasing health awareness, more people "feel connected to others" by posting news on social media of the bread or cakes they have made, Zhong said.

Even disastrous baking attempts have been a hot topic on Sina Weibo, with the hashtag "dream-haunting" viewed more than 690 million times as of Thursday.

Demand has surged for baking staples, some of which have been in short supply. At one time, yeast was hard to find on grocery store shelves and online, with more people baking at home during the pandemic.

The search engine Baidu reported a rising number of queries about "how to make bread without yeast".

Statistics from e-commerce platform JD show that from January to March, sales of baking staples such as cream, yeast, butter and flour rose by 321 percent year-on-year, and those for utensils, including egg beaters, spatulas, greaseproof paper and flour sifters, grew by 360 percent.

Sales of yeast in early February were 10 times those reported for the same period last year.

People－not only in China but around the world－have taken to baking to cope with stress during the pandemic, with yeast shortages also reported in supermarkets across the United Kingdom and the United States. Demand for flour has surged in France, Germany and Australia. 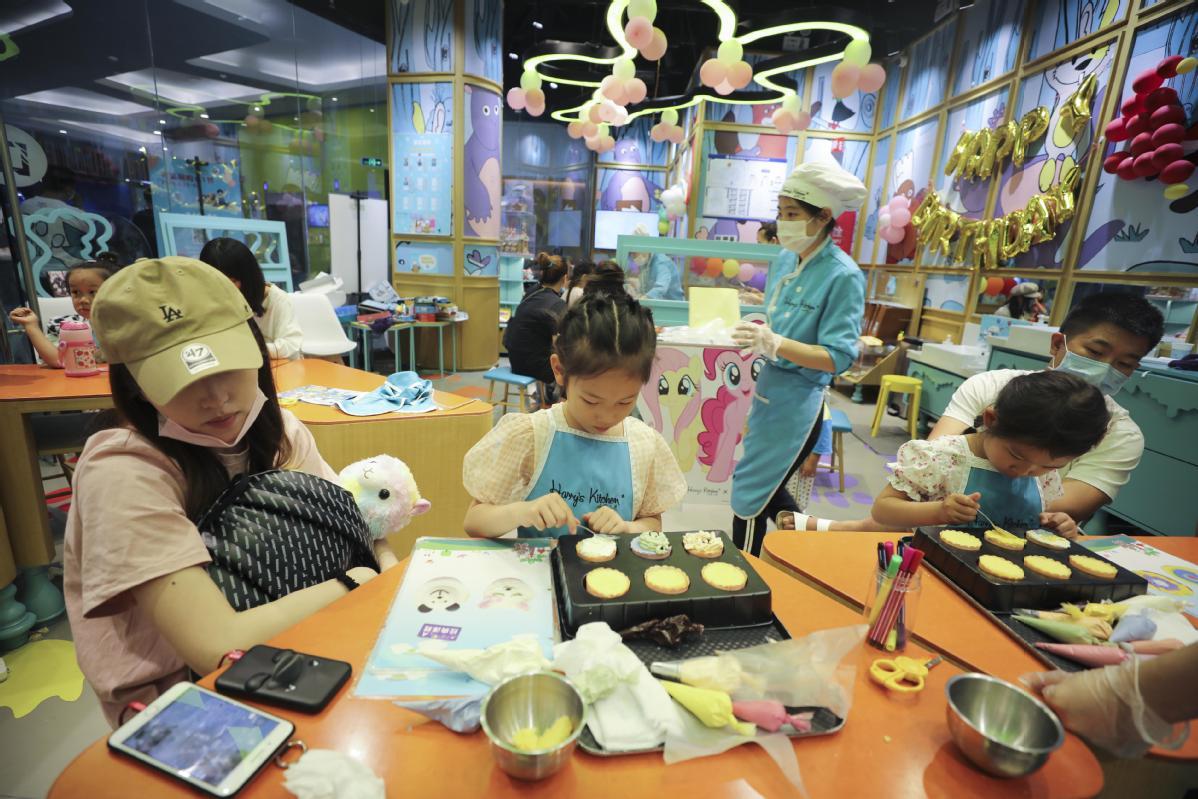 A 2018 study by the German multinational ingredients manufacturer Dr Oetker showed that baking helped people ease stress. These findings mirrored those in a 2016 study published in the Journal of Positive Psychology, which stated that psychologists had begun to explore baking as a therapeutic tool to help deal with depression and anxiety.

The researchers in the latter study tracked 658 people for about two weeks, and found that doing simple, everyday tasks such as baking, made them more enthusiastic about life.

This is exactly how Wang Heru, the mother of a 6-year-old boy in Shenyang, Liaoning province, feels about baking. Faced with the pandemic, and with a lot of spare time on her hands at home, she was initially nervous about the situation.

Wang, who is three months' pregnant, said, "I kept checking my phone, computer and television for news about COVID-19, which drove me crazy and even made me depressed at one time." She added that it is not easy being an expectant mother in such a challenging situation.

"Baking can make me focus and slow down. I enjoy kneading dough and seeing it slowly expand in the oven, which helps me remain calm," Wang said.

In addition to her family, she shares with neighbors and friends the bread, cookies and cakes she makes, helping her keep in touch during the outbreak.

Early last month, to celebrate her husband's birthday, Wang decided to make her first mille crepe－a type of thin pancake－with the help of her son.

"We had a great mother-and-son time baking together. It was definitely the best birthday gift I ever made for my husband," she said.

Like Wang, many amateur cooks said baking gives them a sense of accomplishment and creativity.

Yan, the food blogger, said she was surprised by her followers' creativity in making bread with limited ingredients or utensils.

Lacking a proofing basket, follower "Dongdong MD" made one from rope and used it to shape dough with a spiral print on the top.

Yan said: "You never know how creative a baker can be. With an open mind, everybody can inspire their 'inner baker'."

As people look for something new to cook, bakers across China have embraced one of the hottest dessert trends to hit social media worldwide－Basque burnt cheesecake. The hashtag for the Spanish cake recipe has been viewed more than 5 million times on Sina Weibo.

The cake, from the Basque Country in northern Spain, featured as the "hottest dessert of the year" in a Bloomberg article in January last year.

According to the Michelin Guide Singapore, the dessert rose to fame across Spain a decade ago before slowly making its way overseas, becoming popular in Japan and Turkey, and triggering a craze in Kuala Lumpur, Malaysia, last year.

Celebrity chef Steven Liu has shared his recipe for the dessert on his Sina Weibo account, claiming it is "the easiest cake for beginner bakers".

Shen Lin, a college teacher in Shenyang, Liaoning province, who ran an online cake shop several years ago, tried the recipe and was "amazed" by the cake with a darkened top.

"It looks quite ugly, but tastes surprisingly good," Shen said.