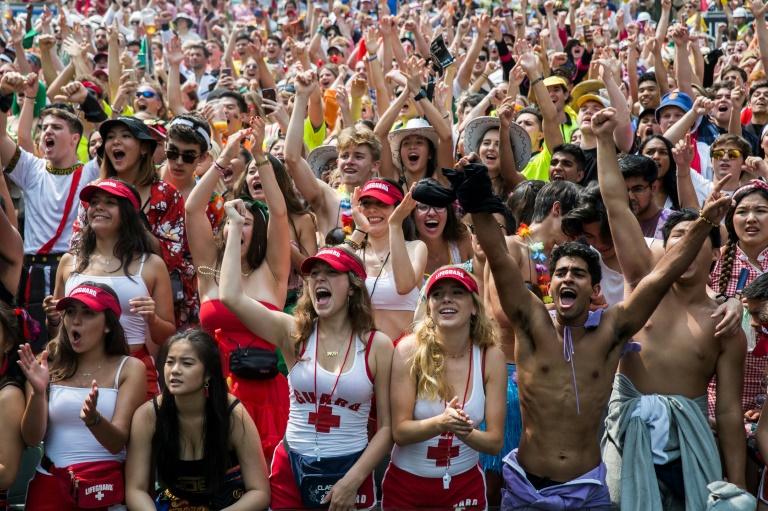 The Hong Kong Sevens is known for its party atmosphere.(Photo: AFP)

The Hong Kong Sevens is getting ready to farewell its long-term home and move to a new stadium in a major reboot as rival cities up their game.

The 40,000-seat Hong Kong Stadium has witnessed rugby greats including Jonah Lomu and David Campese, inspiring a thriving sevens world series and the sport's inclusion in the Olympics.

But organisers say the financial hub's premier sports event has outgrown the colonial-era venue, built on the site of the tournament's previous stadium in 1994.

"I think the grand old lady that is Hong Kong Stadium is iconic, you look around it and the hairs on the back of your neck go up," said Hong Kong Rugby Union chief executive Robbie McRobbie.

"It's beautiful but it's old and it's tired and quite frankly we are excited about going to a state-of-the-art brand new stadium."

In December, a Hong Kong developer won the bid to develop a new, harbourside stadium on the site of the city's former Kai Tak airport, famed for its skyscraper-fringed runway approach.

The new venue will host its first Hong Kong Sevens in 2024, with modern facilities and a separate training ground -- unlike the current arrangement, where teams practise in far-flung corners of the city.

It will bring Hong Kong's facilities up to speed with newer arrivals like Singapore, which will host this week's leg of the world circuit at a 55,000-capacity stadium with a retractable roof and air-cooling for spectators.

- 'Not sevens without Hong Kong' -

Most observers say Hong Kong remains the top event of the world sevens series, largely because of its packed stands and party atmosphere, as well as its unparalleled pedigree.

"The sevens is not sevens without Hong Kong," said New Zealand legend John Kirwan, adding that people-watching at the South Stand's raucous human "zoo" was his favourite experience of the tournament.

Last weekend's edition had all the usual hallmarks, with a boisterous crowd, many in fancy dress, and a fifth consecutive win for Olympic champions Fiji -- their 19th in Hong Kong overall.

The Hong Kong Stadium, buttressed on either end with sweeping views of a verdant hillside and the city's vertical urban landscape, remains the flagship destination for sevens fans.

But a leaked World Rugby survey of last year's sevens series, which evaluated the 10 host cities by factors such as training facilities and stadium amenities, rated Hong Kong just fifth, with Vancouver top and Singapore second.

World Rugby declined to comment on the survey, reported in Singapore's Straits Times newspaper in February, but McRobbie said there was a good relationship between all host cities.

"Honestly, hand on heart, we don't look at any of the other tournaments as rivals or threats," he said.

Development of the new venue at Kai Tak has already been plagued by delays, as it was originally forecast to be completed this year.

McRobbie said he was confident the stadium would be ready by 2024, adding that HKRU had been consulted during tender planning on how best to replicate the current crowd experience.

"In Hong Kong, they can build things very quickly, so I think four years, that's doable," he said. "(The government) are very aware of all the bits that have made this experience so successful."

Hong Kong is looking to the future just as World Rugby plots an expansion into Asian countries, buoyed by sevens' Olympic status and Japan's hosting of this year's World Cup.

Ben Ryan, who coached Fiji to Olympic gold at Rio 2016, said rugby's push into Asia, and especially its adoption by the International Olympic Committee, would not have been possible without Hong Kong.

"I am adamant that without Hong Kong, sevens wouldn't be in the Olympics," he told AFP. "They showcased to the IOC exactly how good the event is and the IOC were blown away by it."

While lauding the Hong Kong Stadium's rich history and its appeal to players, Ryan said he was excited about the tournament's future.

"I'm a bit of a fan of change," he said. "They know the sevens game inside out here, they know how to market it well... If anything it might help it to the next level again."