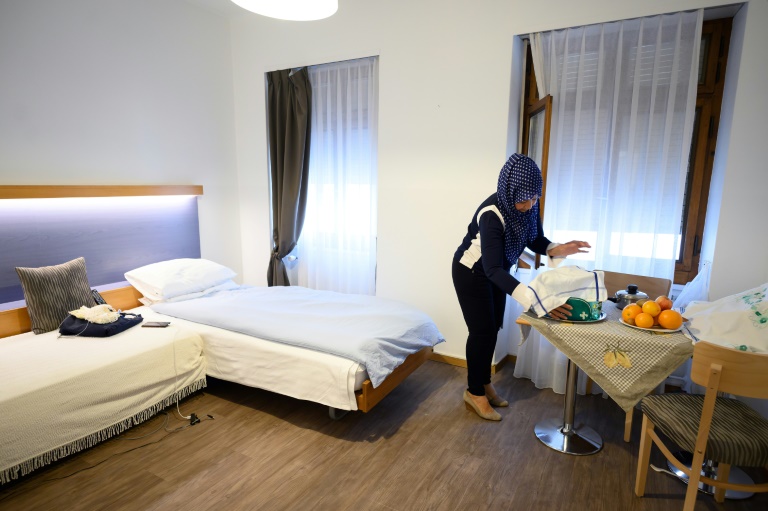 As the Bel Esperance Hotel in Geneva faced a cascade of cancellations, it decided to turn over the entire establishment to house homeless women and youths and help get them off the streets during the pandemic. (Photo: AFP)

Sofiane Rahmani can hardly believe his luck. After several years of living on the street and bouncing between shelters, he now has his own hotel room, personal bathroom and all meals provided.

Last month, as the hotel faced a cascade of cancellations, it decided to turn over the entire establishment to house homeless women and youths and help get them off the streets during the COVID-19 pandemic.

At the hotel in the heart of Geneva's Old City, 20 rooms have been provided to homeless women, while 11 have been given to unaccompanied minors like Rahmani who have no access to seeking asylum in Switzerland.

"It happened fairly naturally," hotel director Alain Meuwly told AFP, sitting in the breakfast room, where tables have been spaced far apart and equipped with only one chair each.

When Switzerland began cancelling all public events and closing restaurants and shops to halt the spread of the virus in early March, "more than 90 percent of our bookings were cancelled," he said.

The hotel, a profit-driven business run by the Salvation Army, was empty.

At the same time colleagues within the Christian charity told him they were looking for safe ways to house some of the estimated 1,000 homeless people in Geneva.

Switzerland, which to date has reported nearly 28,000 confirmed COVID-19 cases and more than 1,100 deaths, does not have a national policy against homelessness, with each of the confederation's 26 cantons implementing their own approaches.

In Geneva, the Salvation Army and other organisations have long provided emergency overnight shelters with a few dozen beds, but never before anything with 24-hour service.

Meuwly said the transformation process was quite simple.

The hotel's regular staff were all placed on temporary unemployment, and a team of social workers were brought in to accommodate the new residents, who will be allowed to stay until June 1.

The dining area was spaced out, masks and disinfectant were provided and only one person was permitted per room.

"Since this is a slightly different clientele we removed some gadgets that you would usually find in a three-star hotel room, like tablets and coffee-makers," Meuwly acknowledged, stressing that the "comfort level is the same."

"There are the same beds and bedding, TVs, and especially wifi. That is something everyone really seems to appreciate."

Ironically, the building served for more than 60 years as a shelter for vulnerable women, but in 1996 it was transformed into a hotel, which today offers elegant, plush rooms that during the high season can go for up to 600 Swiss francs ($620, 570 euros) a night.

Meuwly said he was not worried that housing the homeless might harm business once the crisis ends.

"Not at all," he said, adding that he had received numerous messages from regular customers congratulating him for the initiative and asking how they could help.

"I think it could even be an asset to the business."

Rahmani is certainly happy with the arrangement.

After making a treacherous boat crossing from Algeria to Spain three years ago, making his way to the streets of Paris, and finally to Geneva last month, he said hotel life was "total comfort."

Geneva provides migrants who are unaccompanied minors with special provisions, often officially registering them with organisations and giving access to food and shelter.

Hafida Marsli, a 42-year-old woman who made her way from Morocco to Switzerland a decade ago in search of a better life only to eventually find herself homeless in Geneva, agreed.

"It is really good here," she told AFP, adjusting her headscarf. "It's all good."

Valerie Spagna, who heads the Salvation Army's night shelter programme for the homeless in Geneva, said there was a world of difference from the regular shelters, where people can enter in the evening to sleep in large dormitories or shared rooms, and have to leave early in the morning.

At the hotel, "they can finally relax, take care of themselves, sleep as long as they want," she told AFP. "They have finally gotten a small taste of a more normal life."

She said what she feared most now was "the return to reality" once the homeless residents are asked to leave on June 1.

"They are going to have to go back to real life at some point," she said.