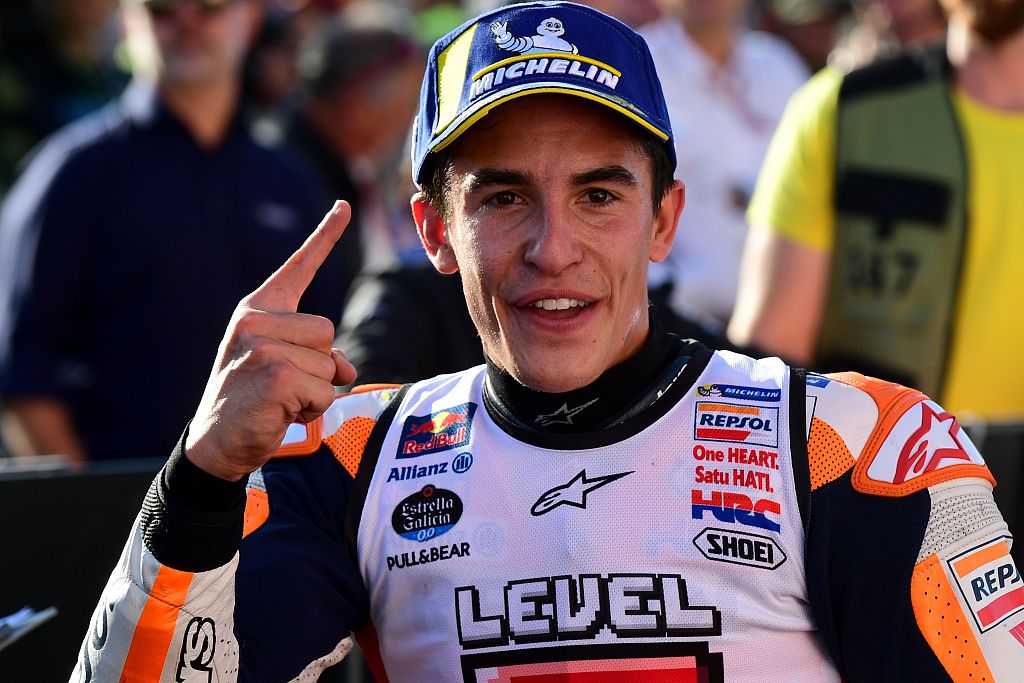 Marquez, still just 25, trails only the Italian pair of Valentino Rossi, who won the last of his seven championships in 2009, and Giacomo Agostini, whose record eighth came in 1975, in the all-time list.

"I already imagined that it will be (decided) here but the important thing is that when you have the first chance, you do it.

"It wasn't the best circuit to do it but I worked hard all weekend," added Marquez.

"I was able to follow Andrea and decided to attack before the last lap. I was pushing really hard, so he made a mistake -- I'm disappointed because he deserves to be on the podium with us."

Marquez started from sixth on the grid at Motegi but quickly knifed through the field and was third by the end of the first lap.

He flirted with disaster on lap 14, however, after overtaking Dovizioso at turn nine before running wide at the next corner and spitting up dirt and dust as he battled to control a violent wobble.

That heart-in-mouth moment allowed Dovizioso to retake the lead, but Marquez continued to swarm all over the Italian, finally slashing past him with a daredevil move on lap 21 of 24.

Dovizioso, who needed to complete a pole to flag victory to keep alive his fading championship hopes, crashed out on the penultimate lap in a desperate last push, ending this year's title race.

Marquez was mobbed by his team mechanics after crossing the line to seal his coronation with three races left.

"The big boss will enjoy this," smiled Marquez after wrapping up the title at Honda's home race.

Fellow Honda rider Cal Crutchlow finished runner-up after Dovizioso's fall with Alex Rins (Suzuki) edging out Rossi (Yamaha) to round out the podium.

"We're pleased with the result," said Crutchlow. "The problem we had was Dovi kept slowing down the pace and it allowed the people behind to catch," added the Briton.

"But we did a great job of managing the situation. Obviously then Dovi crashed so I took second, but I'm very pleased."

Meanwhile, three-time world champion Jorge Lorenzo will miss next weekend's Australian race after sitting out the Japanese round with injury.

Ducati said the Spaniard, who fractured his wrist at the previous race in Thailand, will aim to return at the penultimate weekend in Malaysia at the start of November.