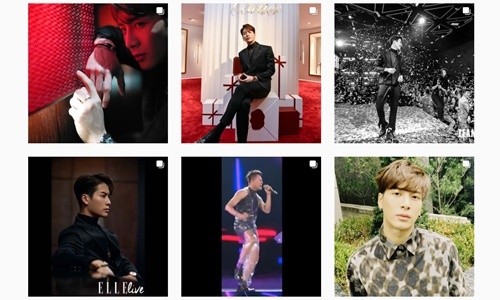 Chinese mainland netizens gave the thumbs-up to Hong Kong-born singer Jackson Wang, a member of the hit South Korean boy group GOT7, after he spoke in fluent Putonghua (Standard Chinese) at the 2020 Mnet Asian Music Awards in South Korea on Sunday night.

The K-pop band GOT7 won the Worldwide Fans' Choice Award Top 10 at the musical awards. The various members gave acceptance speeches in English, Thai or Korean. When it came to be Jackson's turn, the singer spoke in Putonghua without a notable accent to express his thanks for their fans' support and remind them to be safe and stay healthy amid the COIVD-19 pandemic.

"In this special period, I hope everyone can stay safe and do not forget to wear face masks before going outside," Wang said.

As Cantonese is a major dialect in Hong Kong, it is not unusual for entertainers from this area to speak Putonghua with an accent.

"My goodness, Jackson's Putonghua has improved so much! In the past, he had a strong Cantonese-accent when speaking Putonghua and could not speak smoothly, but now it is completely standard Putonghua," one Chinese mainland netizen posted on Sina Weibo.

"I started to have a lot of respect for him from the moment he emphasized on South Korean variety shows that he is from the Hong Kong Special Administration Region in China," another netizen wrote on Sina Weibo.

The 26-year-old star has a history of showing national pride. He once was the target of online threats after he posted on Sina Weibo in 2019 that he considers himself a guardian of China's national flag.

The threatening messages included sharing GOT7's flight information and talking about "detaining him while tearing the Chinese flag to shreds in front of him" and even "forcing him to hold a flag of blood."

Many Chinese mainland netizens showed their admiration for Wang to have the courage to take a political stand in public.

"I really appreciate that celebrities such as Jackson Wang and Crystal Liu, the protagonist of the Disney film Mulan, choose to take a risk to show their political stance. They still made this choice when they know there might be serious consequences. They deserve our respect," one netizen commented on Sina Weibo.