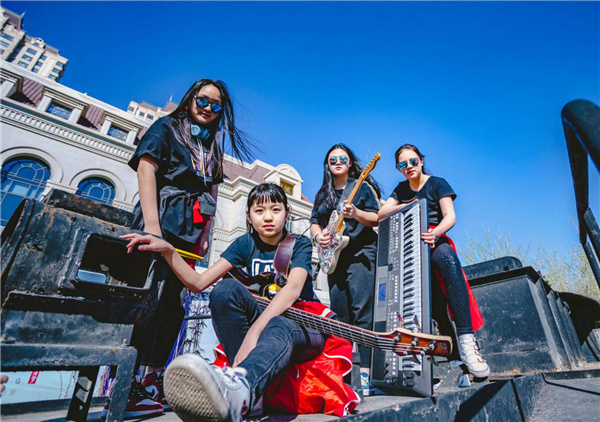 They came exactly as labeled. "I want people to see how cool an all-girl rock band can be," says Zhou Zi, the 15-year-old lead vocalist and guitarist of the Tianjin-based rock band, Cool.

The ensemble was crowned champion of the youngsters' group at the 2019 Midi Kids Band Competition, becoming the first all-girl rock band to win the national contest.

Their original song, Chase, a mixture of hip-hop and funk, which was performed during the final round of the competition, was released as part of a live album, Hai Xing A Mian, (meaning "kids can, Side A"), on June 23, by the competition's organizer, Beijing Midi Art Communication Co Ltd.

"I will never give up halfway, though the road ahead of me is a rough way," sings Zi, who wrote the lyrics of the song. "My future, my dream, I will chase in my own way."

Zi first joined a vocal group with three other girls of her age when she attended a music training center in Tianjin. Her father wanted her to learn to play a musical instrument, so he took her to a street in Tianjin which sold both Western and traditional Chinese musical instruments.

It wasn't long before she turned her attention to the musical instrument she would eventually stick with－the guitar. At the same time, she set up a band along with three girls she met at the music training center, including drummer Ruichen.

"As I grew up, I realized that many rock bands are male-dominated. Usually girls are associated with dancing, painting, piano or guzheng (Chinese zither)," says Zi. "Though our band has gone through changes, we keep the all-girl lineup.

"We want to show people how girls play rock'n' roll and we're making a difference."

Looking at the band's resume, it is easy to be impressed by their stage experience. In 2013, they performed at Beijing Midi Music Festival, one of the oldest outdoor music festivals. It was launched in 2000 by the Beijing-based Midi School of Music, China's first school of contemporary music, founded in 1993.

In 2015, the band made their debut at Summer Sonic, one of Japan's major festivals, in front of tens of thousands of spectators from around the world.

She adds that her parents are supportive of her music dream, yet her teachers and classmates misunderstood her decision to become a rocker. 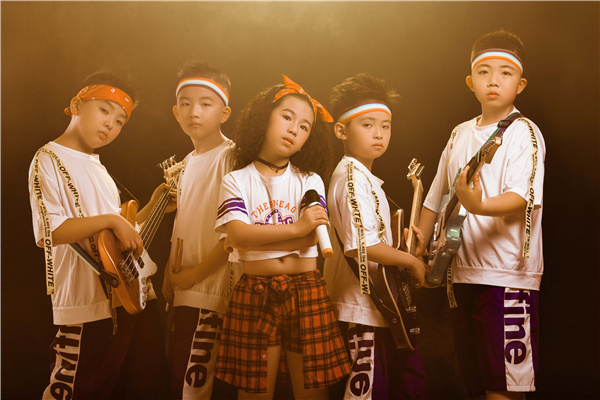 "It's commonly seen that teenagers in the Western countries play in rock bands, but it's still not the mainstream culture among Chinese teenagers," Zi says.

"My solution is to show them the videos of our band's performances and to explain with our music, which is the most direct way of letting them know what I am doing.

"Usually they will be impressed and become our fans."

Besides music, for her, one of the biggest rewards of forming the band is having a long-lasting friendship with Ruichen, the drummer and co-founder of the band. The two girls decided to further their music study in the United States together.

According to Liu Huan, CEO of Beijing Midi Art Communication, the recently released live album features an "A side", and its "B side" will be released soon.

The two parts gather 18 Chinese teenage bands and their 22 original songs. They were chosen from 228 teenage bands that applied to the 2019 Midi Kids Band Competition.

"It has been 10 years since our company launched a music label for Chinese kids, who play in bands," says Liu, referring to the Midi Kids art project it launched in 2010.

"The younger generations are open to various music styles and the internet has enabled them to get access to lots of music resources. They are creative and grow fast musically."

The number of people applying to the 2019 Midi Kids Band Competition increased by 50 percent compared to the competition in 2018, according to Liu.

Now in its fourth year, the contest has expanded its territory from three divisions－Beijing, Shanghai and Shenzhen－to seven divisions nationwide. These include Changsha in Hunan province, Chengdu in Sichuan province and the Xinjiang Uygur autonomous region.

For Zhang Yao, music teacher of another children's band, called Shenhaiyu (meaning "deep-sea fish"), it seems that when kids play in a band, they learn much more than how to play music.

"It takes lots of time to practice. When kids play together, they have to learn to cooperate, which is about teamwork," Zhang says.

"They also learn to be brave and confident while playing in front of an audience."

Shenhaiyu is a rock band from Yuhuan city, Zhejiang province. The name of the band was inspired by the members' hometown, Yuhuan, a beautiful island area.