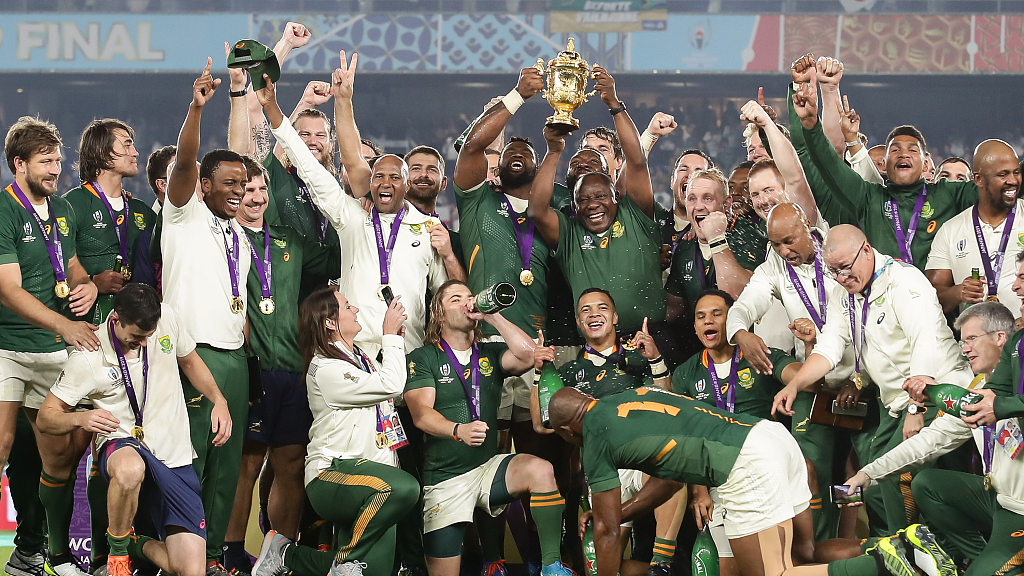 The 2019 Rugby World Cup has been revolutionary in many sense. The biggest showpiece event in World Rugby traveled to the Asian continent for the first time in its history and reached a new high when a black South African captain held the coveted Webb Ellis Trophy after the final match at the Yokohama Stadium on Saturday night.

The Springboks are now on par with All Blacks, having won their third title. But this particular win is historic for the rainbow nation and its scarred apartheid past, with Siyamthanda Kolisi, a black captain leading the team. The team's triumph in Japan saw Nelson Mandela's post-apartheid dream that started with the 'Invictus' moment at Ellis Park in 1995 come full circle. It was anti-apartheid icon 'Madiba' who gave the clarion call to his fellow blacks to shed their inhibitions against the "white men's sport" and back the Pienaar-led Boks at a time when his country was gradually emerging as a rainbow nation after overcoming decades of racial segregation and discrimination. There was the only black player, Chester Williams, in that extraordinary batch of 95 but the whole 'Rainbow nation' stood together under Mandela's inspiring leadership to rally behind that first Rugby World Cup-winning South African team.

Sadly, Williams, the sole black face of the Rainbow nation during the 1995 Rugby World Cup, passed away just a couple of weeks before the Springboks launched their campaign at this year's World Cup. However, six weeks later, a 'mixed' Springboks side, led by a black captain, accomplished the title triumph, powered by two match-winning tries in the phenomenal finale, scored by one black player, Makazole Mapimpi, and another a colored Cheslin Kolbe, displaying a perfect manifestation of the "Rainbow Nation," once envisaged by the first black President of South Africa Nelson Mandela.

Kolisi, whose 50th test for the Boks brought home the terrific third Webb Ellis Trophy triumph with the team motto of "Stronger Together," is the ultimate face and soul of the "Rainbow Nation" that is still struggling to come together as one. Interestingly, the captain extraordinaire was born to teenage parents in an underprivileged black family on June 16, 1991, just a day before the landmark vote at the South African parliament to repeal the legal framework of Apartheid and begin the process that would eventually abolish Apartheid. He was raised in the poor township of Zwide in Port Elizabeth on the southern tip of South Africa where his parents struggled every day to make ends meet. Rugby came to the impoverished childhood of Kolisi when he was just seven years old and opened a new horizon for the boy, who could not even get a full square meal a day at that time. The rest, as they say, is history.

In 2007, when another South African colored icon Bryan Habana's record-equalling eight tries helped their white captain Smit lift the Webb Ellis Trophy for the second time, a young, rugby-loving Kolisi watched the finals at a pub since his widowed father couldn't afford a television set at home.

Twelve years later, Kolisi, scripting an incredible rags-to-riches fairytale in his personal life, not only won the Webb Ellis Trophy as the first-ever black captain but also marked his father's first-ever foreign travel to Yokohama as a proud Fezakele Kolisi watched his son make history from the stands.

"We have so many problems in our country, but to have a team like this… You know, we come from different backgrounds, different races, and we came together with one goal, and we wanted to achieve it. I really hope that we have done that for South Africa, to show that we can pull together if we want and achieve something," an elated Kolisi proudly remarked at the post-match presentation ceremony after winning the biggest silverware in his life.

In a post-match speech that would be considered as the most powerful one in world sports for years, a statesman-like Kolisi added: "I have never seen South Africa like this. We were playing for the people back home. We can achieve anything if we work together as one."

New dawn for a "Rainbow Nation"

Incidentally, the South African victory came at a time when the country has been grappling with a spate of recent xenophobic violence and vandalism.

Kolisi's mentor and Springboks coach Rassie Erasmus, who not only spotted his raw talent early on but also appointed him as the first black captain in 128 years of Springboks' existence, described the significance of his side's win: "In South Africa (pressure) is not having a job, (or) having a close relative who is murdered. Rugby should not create pressure, it should create hope. We have a privilege, not a burden."

“…and no matter what political or religious difference for those 80 minutes, you agree when you usually disagree. That is our privilege, and that was the way we tackled it,” the man in the hot seat aptly described the Boks' triumph.

The incredible success story of Kolisi & his boys was appropriately commemorated by the Nelson Mandela Foundation, the organization that was once founded by the peace icon himself to promote his vision of freedom and equality for all, as they stated: "Nelson Mandela was a firm believer in the power of sport to unite people. Today stands as a great example of what we are able to achieve when we stand together, united in our diversity.”