CULTURE How Charles Dickens helped to redefine the modern Christmas

How Charles Dickens helped to redefine the modern Christmas 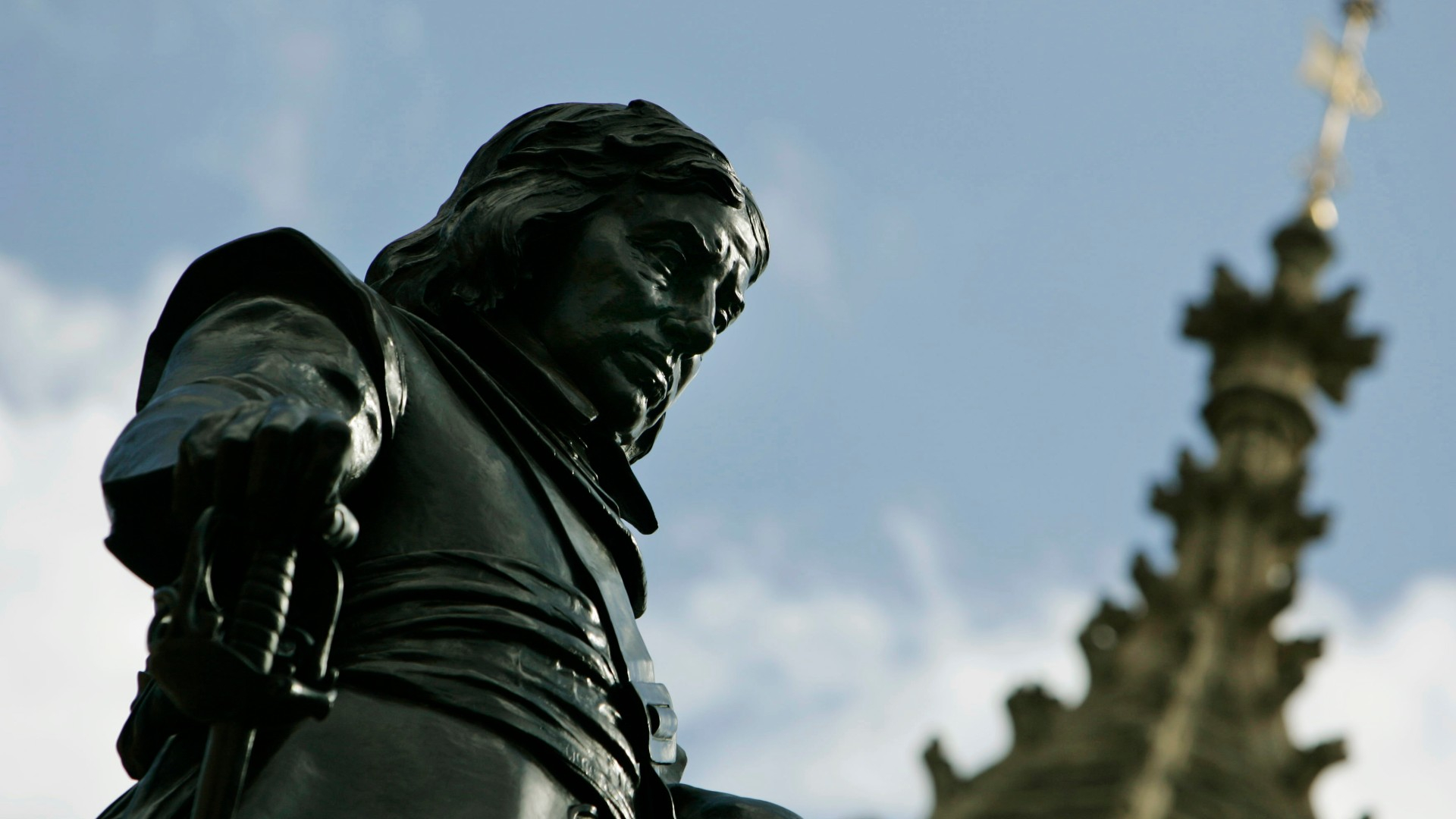 Oliver Cromwell, whose statue stands outside London's Houses of Parliament, was no fan of Christmas ribaldry (Photo: AP)

Everyone celebrates Christmas in a different way, according to taste, religion and circumstance. But there are certain festive tropes that seem embedded across borders: the tree, the turkey, the tinsel and other traditions. But how many of these come from Charles Dickens and his much-loved 1843 story A Christmas Carol?

Perhaps influenced by his parents, who had been servants at Crewe Hall where the owner was particularly fond of Christmas, Dickens himself certainly loved the festive season. His eldest daughter Mamie said "Christmas was always a time which in our home was looked forward to with eagerness and delight," while her brother Henry recalled: "My father was always at his best, a splendid host, bright and jolly as a boy and throwing his heart and soul into everything."

Dr Cindy Sughrue, director of the Charles Dickens Museum, says that "For Dickens, the entire season was an excuse to celebrate and come together." But in the early Victorian era, Christmas wasn't really a 'season' at all - and to understand why, we have to take the long view of history.

The 18-year-old Victoria had taken the throne in 1837, six years before the release of A Christmas Carol. From the present day, that's more than halfway back to the interregnum era of 1649-1660, when the English monarchy - having lost the Civil War - was overthrown and replaced by a parliamentarian leadership, mostly under Oliver Cromwell.

By the Middle Ages, Christmas had become conflated with the pagan Yuletide feast and Roman celebration of Saturnalia into an extended midwinter festival. Like most Puritans, Cromwell rejected what he saw as ostentation and sinful celebration, and believed Christmas should be reserved for respectful contemplation.

Under his rule, every Sunday was enforced as a strictly-observed holy day, but shops and markets were ordered to remain open on 25 December; in London soldiers patrolled the streets seizing any food being prepared for festive celebrations. One governmental order decried those "who have turned this feast, pretending the memory of Christ, into an extreme forgetfulness of Him, by giving liberty to carnal and sensual delights."

Too busy working to play

After the restoration of the monarchy in 1660, Christmas Day was openly celebrated and became a public holiday by default - but not by law: English 'bank' holidays weren't legalised until 1871, and anyone who knows A Christmas Carol will recall that Bob Cratchit has to respectfully request the day off from his miserly employer Ebenezer Scrooge.

Cratchit wasn't alone in being at the mercy of his employer. By 1843, the factories of the industrial revolution had lured in the working classes from the country to the town; whereas farm labourers may have been underemployed in winter, factories had no reason to stand idle and would be back in action on 26 December, which had only recently started to become known as Boxing Day (from the tradition of leaving a 'Christmas box' for tradesmen).

A return to (new) traditions

However, Charles Dickens had a fine sense of public taste; after all, as a writer he depended on reflecting popular opinion and morality. With their slightly looser working lives, the burgeoning middle classes were starting to take more of an interest in the jollification of the festive season, reviving half-forgotten traditions and creating new ones, as detailed in compendiums like TK Hervey's Book of Christmas (1836), the same author's A History of the Christmas Festival, the New Year and their Peculiar Customs (1843) and Thomas Wright's Specimens of Old Carols (1841).

Some of this enthusiasm came from the very top of society. Victoria's beloved husband Albert imported from his native Germany the previously bizarre idea of hacking down a tree, dragging it indoors and gaily decorating it. The first Christmas card was sent in 1843 by a wealthy British businessman, Sir Henry Cole.

Having fluctuated in popularity across the centuries, carol-singing was significantly boosted by the publication of Christmas music books: in 1833, William Sandys' Christmas Carols Ancient and Modern included the first prints of God Rest Ye Merry Gentlemen, The First Noel, I Saw Three Ships and Hark! The Herald Angels Sing. It's not a coincidence that the commercially aware Dickens called his 28,000-word novella A Christmas Carol.

The Carol wasn't Dickens' first venture into festive storytelling: he'd already written short Christmas stories and mentioned the subject in novels including The Pickwick Papers. (In the wake of the Carol's success he would also, perhaps understandably, release new stories for Christmas 1844, 1845, 1846 and 1848.)

By late 1843, the 31-year-old Dickens needed a hit: his latest novel Martin Chuzzlewit wasn't selling, his wife Catherine was expecting her fifth child, his father was milking him for money and the rent on the new family home at Devonshire Terrace was proving such a drain on resources that Dickens was pondering renting it out and emigrating.

Boosted by cheaper printing and rising literacy, book publishers were increasingly aware of the Christmas market. But Dickens wasn't merely a commercial opportunist. Earlier in 1843 he had been so affected by the deprivations of the poor that he had considered writing a political pamphlet, but wisely chose to pen a morality tale instead.

Dickens didn't become rich overnight - profit margins were narrowed by those high production costs, and he had to fight legal actions against pirate versions - but his name was made, and his legacy was secured as his heartwarming tale became central to a changing Christmas.

In 1921 the literature scholar VH Allemandy proclaimed that "Dickens, it may truly be said, is Christmas," but how much of the modern season is down to him? It depends on your circumstances and location. Dickens' idealised notion of a snowy London came from his experiencing six "white Christmases" in the first nine years of his life, at the end of what climatologists now call the Little Ice Age - but amid our changing global temperatures, the concept of a snowy Victorian December now seems distant in Acton and Archway, let alone Athens and Arizona.

Certainly Dickens helped to popularize certain elements that many now associate with Christmas. Spoiler alert: At the end of the story the newly enlivened Scrooge buys the Cratchits a turkey, which was far from the default Christmas meal it had become - although some middle-class families would tuck into the fowl, the working classes generally ate goose while the gentry dined on venison and beef. Turkey's starring role in the story, coupled with its increasing affordability, made it almost as indispensable a part of the English Christmas as it is of the American Thanksgiving.

Dickens' Christmas is also surprisingly secular, considering his own faith. Characters make passing reference to Biblical events, but the festivities are focused on family rather than faith - whether it's the Cratchits' humble meal or the jolly evening of parlour games that Scrooge is shown by the Spirit of Christmas Present. While it's undeniable that religion is much less central to the average Christmas than it was 200 years ago, it would be foolish to suggest this shift was caused or even particularly perpetuated by Dickens.

Dickens also laced his morality tale with warnings and prompts, some subtler than others. The overall message of charitable help was obvious enough to affect the humble and the mighty, but anthropologist John Gannon suspects Dickens worried about consumerism: he notes that the happy family present-giving is disrupted when the baby has swallowed "a fictitious turkey, on a wooden platter." Gannon argues that the author is saying "though it is necessary to embody the spirit of this new consumerist ethic it may well go on to haunt our houses unpleasantly."

Even so, the idea of families getting together, swapping presents and generosity - even saying "Merry Christmas," a phrase which had been around for three centuries but rarely used - owes at least a little to Dickens. Whether he formed it, predicted it, described it or merely told a good tale, Christmas wouldn't be quite the same without him.