CULTURE How do Broadway stars cope with silent theaters? They sing

How do Broadway stars cope with silent theaters? They sing 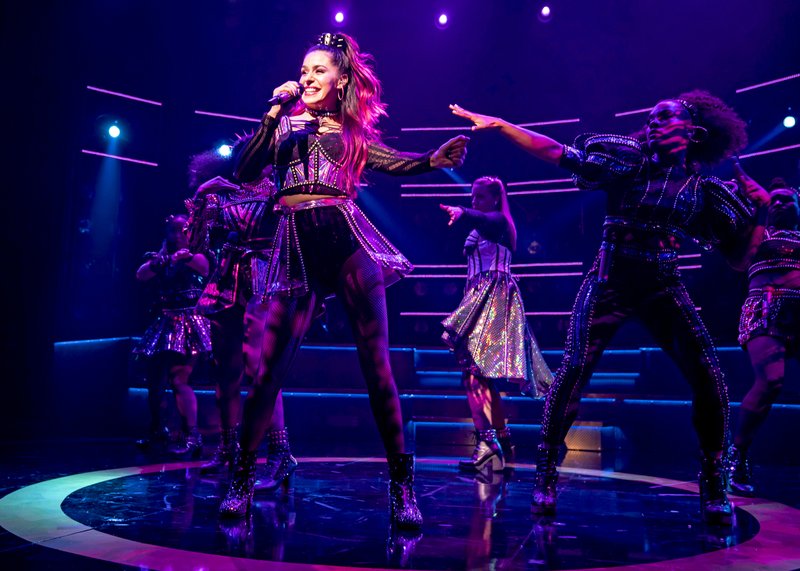 This image released by Boneau/Bryan Brown shows Samantha Pauly during a performance of "Six." Pauly and fellow cast member Brittney Mack, who play two of Henry VIII's wives in the musical “Six,” have turned their disappointment at having their musical on hold by doing what they do best — sing. (Photo: AP)

The coronavirus silenced Broadway. It could not silence two of its rising stars.

Samantha Pauly and Brittney Mack, who play two wives of Henry VIII in the musical “Six,” have turned their disappointment at having their musical on hold by doing what they do best — singing for an audience, this one on social media.

“It’s partly making sure that I am still vocalizing and singing every day and doing something. But it’s also kind of keeping me sane,” Pauly says.

The daily songs are just one way that theater folk have passed the time since Broadway went dark. Playwrights like Lauren Gunderson and Young Jean Lee are offering online tutorials, performers are doing fundraisers and choreographers are breaking down dances online.

The cast of “Come From Away” did a video to say thank you to medical personnel. The cast of “Beautiful” gathered for an online version of “ You’ve Got a Friend.” Andrew Lloyd Webber has serenaded Twitter with tunes on his piano. And the cast of “Hamilton” reunited — albeit remotely — to perform “ Alexander Hamilton.” Some shows have pivoted to becoming audiobooks.

Broadway theaters abruptly closed on March 12, knocking out all shows on the Great White Way but also 16 that were still scheduled to open, including “Diana,” “Mrs. Doubtfire” and “Company.” The news was especially crushing for the cast and crew of “Six” since they learned about the shutdown hours before they were officially to open.

“It’s like you’re at the Olympics and you’re right there at the finish and you tripped over something you don’t even see,” says Mack.

So each day, Pauly and Mack in their respective apartments— one on Roosevelt Island, the other in Harlem — make Instagram videos of themselves singing favorite songs or ones that have been requested by fans.

Pauly started the push, singing everything from “Beautiful” by Christina Aguilera to songs from rival musicals like “Mean Girls” and “Beetlejuice.” Mack followed, throwing her big voice into the ring, offering gospel songs to tunes from classic shows like “State Fair.

Pauly and Mack keep in touch with their fellow actors on WhatsApp and wait for when their voices will once again be requested on Broadway. Both are confident “Six,” a rollicking, pro-woman show, will be back.

“I think, as artists, we are always very hopeful and we know the power of theater and music, which is another reason that I’ve just been making these videos,” Pauly says. “I think that’s what kind of kept me from spiraling out of control and crying on my couch.”

The virus has sickened Broadway veterans, including the actors Brian Stokes Mitchell, Gavin Creel, Aaron Tveit and Laura Bell Bundy as well as composer David Bryan. It has claimed the life of Tony-winning playwright Terrence McNally.

Some shows scheduled to open this spring have abandoned plans to open at all, including “Hangmen” and a revival of Edward Albee’s “Who’s Afraid of Virginia Woolf?” Others — like revivals of “Caroline, or Change” and “Birthday Candles” — have been moved to the fall.

There has been help from several quarters: Broadway’s unions and producers have agreed on emergency relief to provide Broadway employees with pay and health insurance for a few weeks. The Actors Fund has distributed $2.8 million to thousands of workers and The American Theatre Wing is spearheading a $250,000 fund for workers and giving $1,000 each to over 80 regional theaters.

“There are still a lot of artists that are very scared, that are worried about money, especially shows that won’t be coming back,” says Pauly.

Broadway producers — anxious to reopen an industry that grossed $1.8 billion last season — have revised their projections and said Wednesday that theaters will reopen June 7.

Pauly has enough saved for a few months of rent but worries she may have to leave the city if the shutdown drags on past June. She was relieved to hear the new estimated return date: “There’s light at the end of the tunnel.”

If “Six” was about to officially say hello, another show was about to say goodbye. “A Soldier’s Play” had just three more performances left in its three-month run when Broadway shut down.

“I’m just glad we had a chance to really almost complete our run,” said one of its stars, Blair Underwood. “I just feel bad for the performers and the productions coming up that are just coming into rehearsal. You know that that future is kind of uncertain right now.”

On what was to be “Six’s” opening night, instead of audience applause, Mack got family hugs and some popcorn; She took her opening night flowers home. “My friends are like, are you OK? I was like, ‘I need hot wings and beer right now, stat.’”

Mack and Pauly say having their loved ones around took the sting out of the disappointment. But both are more than eager to get back to work.

“It’ll be exciting to get back and turn the lights back on Broadway,” said Mack.