How human brains became so big 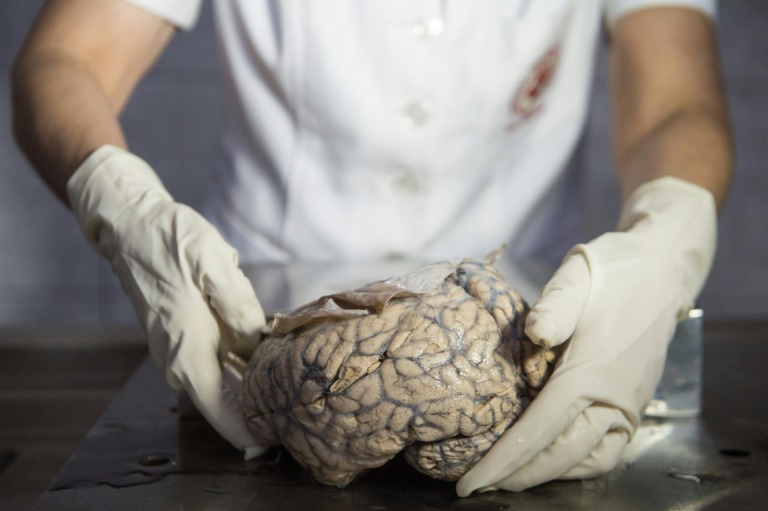 Dr Diana Rivas displays a human brain on a working surface at the "Museum of Neuropathology" in Lima, Peru (Photo: AFP)

The human brain is disproportionately large. And while abundant grey matter confers certain intellectual advantages, sustaining a big brain is costly -- consuming a fifth of energy in the human body.

It is an oddity that has long flummoxed scientists: while most organisms thrive with small brains, or none at all, the human species opted to sacrifice a degree of body growth for more cerebral capacity.

On Wednesday, researchers said they can finally reveal how and why this happened.

The human brain, they suggested, expanded mainly in response to environmental stresses that forced our species to come up with innovative solutions for food and shelter, and pass the lessons on to our offspring.

The finding challenges a popular theory that the thinking organ grew as social interactions between humans became more and more complex, a research duo wrote in the science journal Nature.

In fact, the inverse may be true.

"The findings are intriguing because they suggest that some aspects of social complexity are more likely to be consequences rather than causes of our large brain size," said paper co-author Mauricio Gonzalez-Forero of the University of St Andrews in Scotland.

"The large human brain is more likely to stem from ecological problem-solving and cumulative culture than it is from social manoeuvering."

From our ape-like Australopithecus ancestors to modern Homo sapiens, the human brain has tripled in size.

But feeding such a big brain has been suggested to come at the cost of slow body growth in childhood -- leaving our young dependent and vulnerable for longer than other animals.

Previous research found correlations between large brain size in species and complex social structures, living in challenging environments, and an ability to learn lessons from peers -- also described as "culture".

But no studies have been able to conclude whether these factors are the cause of brain expansion, or the result of it.

With colleague Andy Gardner, Gonzalez-Forero developed a mathematical model to measure whether being confronted with ecological and social problems has a measurable impact on brain growth, and if yes, how much.

Model "brains" were presented with ecological challenges -- finding prey in bad weather or in tough terrain, for example, preserving food to protect it against mold or heat spoilage, or storing water amid drought.

Social challenges were introduced too, to test the influence on brain growth of cooperation and competition between individuals and groups.

Interestingly, cooperation was associated with a decrease in brain size, the researchers said -- probably because it allows individuals to rely on each other's resources and to save energy by growing smaller brains themselves.

But why did human brains grow more than those of other animals living in challenging environments?

Probably because of culture -- the ability to learn skills from others rather than having to figure everything out for ourselves.

"So, our results suggest that it is the interaction of hard ecology and culture that produced the human brain size," said Gonzalez-Forero.