How Star Wars can reconnect China 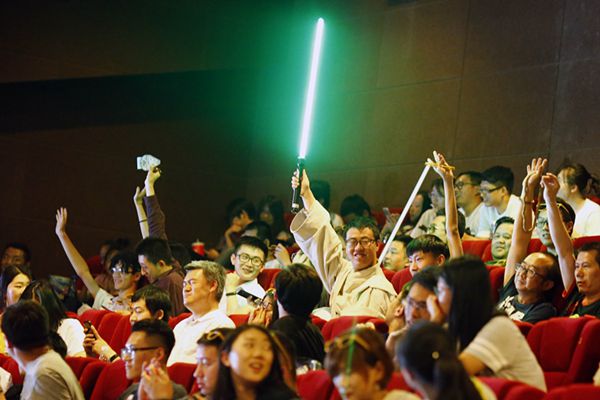 A fan holds up high his lightsaber at a packed fan event to screen "Solo: A Star Wars Story" on its debut day in Beijing, May 25, 2018. [Photo courtesy of DX]

Last weekend, hundreds of Star Wars fans gathered in three selected theaters in Beijing, Shanghai and Chengdu, many of whom were dressed in classic costumes of Han Solo, Princess Leia and Rebel Alliance soldiers, cheering and waving lightsabers, to celebrate the opening of "Solo: A Star Wars Story" in China.

"I personally love it very much, " said Dio, one of the organizers of the events and long-time Star Wars fan, "It is different from previous styles of Star Wars films, and the narrative is more comfortable. The film is very smart to pay tribute to nostalgic elements, and while the old fans are satisfied, the general audience will also find no difficulties to understand and enjoy it."

But the new Star Wars episode may not please all, as box office sales suggest. Even in North America, it had a soft Memorial Day Weekend debut of US$103 million, much lower than industry expectations.

The situation in China is much worse. Last weekend, it only raked in 62.98 million yuan (US$9.82 million) and was beaten by local romance film "How Long Will I Love U" and Disney's own "Avengers: Infinity War," both released over a dozen days ago.

To get closer to China, critically claimed "Rogue One: A Star Wars Story" added two heavyweight Chinese actors, Jiang Wen and Donnie Yen to the cast, but the film only grossed 477 million yuan (US$74.32 million) in the market in 2017. "Star Wars: The Last Jedi" hit a low in January this year, with a total gross of only 267 million yuan (US$41.6 million), pale in comparison to China's local romantic production "The Ex-file：The Return Of The Exes" which took in 1.94 billion (US$302.45 million) at box offices during the same release period.

For "Solo," Disney didn’t even send its cast and creative team to China for any promotional activities.

"Marvel's films are simple and easy to understand, and they can also stand alone, compared to the complex Star Wars culture and philosophy system," said Sha Dan, a well-known film expert and curator of Beijing Film Panorama under the Beijing International Film Festival and programs of the China Film Archive, "As Marvel superhero flicks become more dazzling in action scenes, Star Wars films still opt for the vintage style. For the Chinese audience, lightsaber fighting is less exciting than Chinese kung fu, while space battle scenes are seen in many sci-fi movies such as 'Star Trek.'”

When George Lucas' original "Star Wars" debuted in 1977, China had just ended its Cultural Revolution and hadn't opened to the world. Decades later, 20th Century Fox eventually got the prequels, Episodes 1-3, to screen in China around the new millennium. "The Phantom Menace" (1999) earned US$5 million, "Attack of the Clones" (2002) took in US$7.2 million and "Revenge of the Sith" (2005) grossed US$11.7 million in the Chinese market. Although the numbers are less impressive in today's market, it was worth noting that the three episodes' box office returns were ranked as No. 1, No. 3 and No. 2 respectively as China's highest grossing foreign films of their respective release years.

Cao Lei, COO of Iron Moon, a bookstore specializing in comics, fantasy novels and merchandise including Star Wars series, said she is satisfied with Disney's exploration of Star Wars universe in recent years. But "The real fans in China are very few," she said, "The Chinese audience are not familiar with the franchise after more than a decade of absence since 'Revenge of the Sith.' People will not step into the theater again if they felt they couldn’t understand the story."

All six previous episodes of "Star Wars" were screened at the Shanghai International Film Festival in 2015 and the Beijing International Film Festival in 2016, a great revisit approach of Disney to please old fans and educate new fans. But "Star Wars" was not the most popular brand at the festival, Sha Dan recalled, who with his team selected films to be exhibited at the Beijing film fest.

Dio, is an active fan as well as commanding officer of Rebel Legion Chinese Base and executive officer of 501st Legion Chinese Garrison, two Star Wars costuming fan clubs which organizes fan events and charity events who Director J.J. Abrams even agreed to let Dio use his mobile phone to record a video of him greeting Chinese fans.

Shi Bo, a publisher with the Starfish Press who negotiated the license deal with Disney in 2014 to publish the Star Wars book series in China, said Star Wars is a unique experience for every and each fan, "Everyone has their own opinion on which way Star Wars should go, I'm afraid even George Lucas himself could not please all. I think the current film series creators are still in awe of the original trilogy, which may limit their ability to innovate."

He also offered some advice for Disney in the China market, saying that, "We hope Disney can listen to Chinese fans to develop Star Wars content more favored by the Northeast Asia market. For example, with our recommendation, Disney hired Chinese-born American sci-fi writer and translator of 'The Three-Body Problem,' Ken Liu, to write the novel of 'The Legends of Luke Skywalker' in English. One day, Disney can also hire a Chinese native writer to create a Star Wars piece in Chinese." 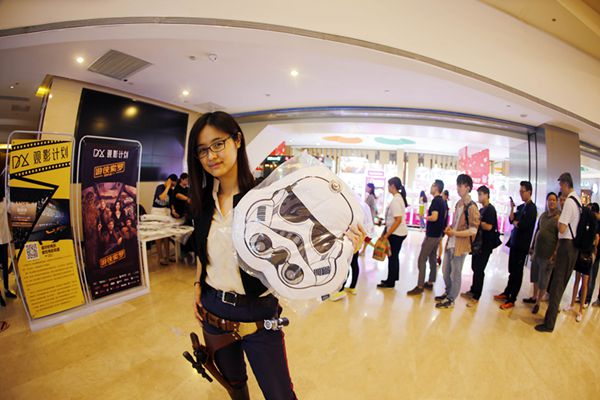 A fan dressed in a Star Wars costume poses for a photo before a fan event to screen "Solo: A Star Wars Story" on its debut day in Beijing, May 25, 2018. [Photo courtesy of DX] 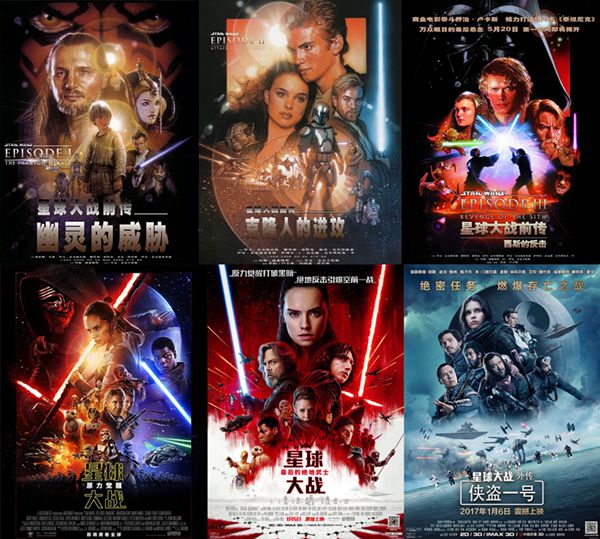 A combination of posters of all six of the Star Wars films to have hit big screens in China. [Photo/ China.org.cn] 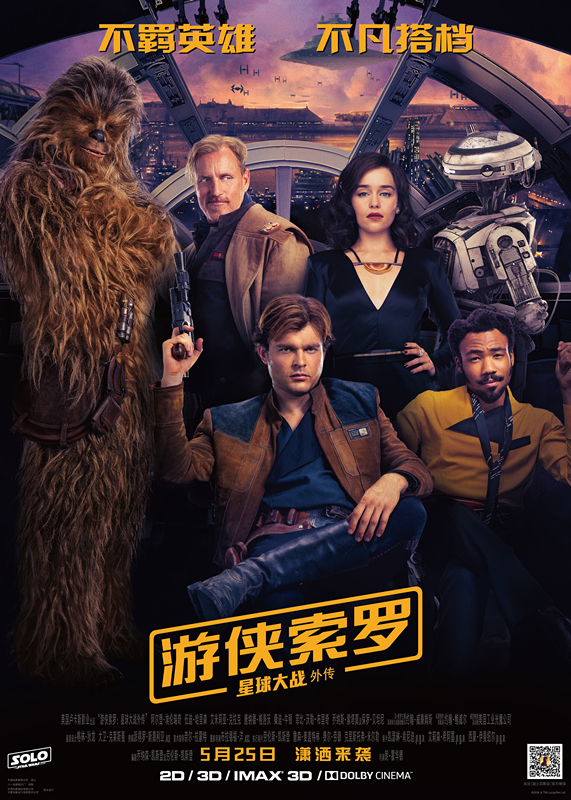