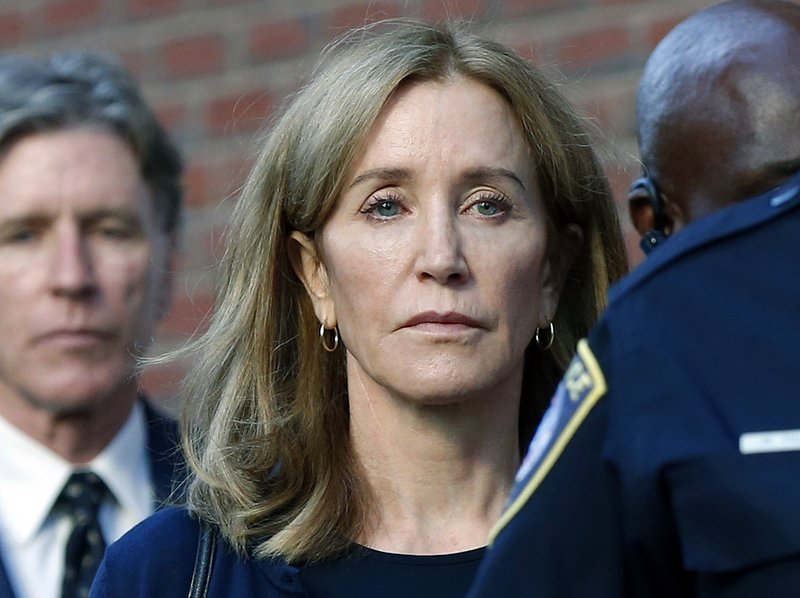 In this Sept. 13, 2019 file photo, actress Felicity Huffman leaves federal court in Boston with her brother Moore Huffman Jr., left, after she was sentenced in a nationwide college admissions bribery scandal. (Photo: AP)

Actress Felicity Huffman was released Friday morning from a federal prison in California two days before the end of a two-week sentence for her role in the college admissions scandal, authorities said.

The “Desperate Housewives” star was released from the low-security prison for women because under prison policy, inmates scheduled for weekend release are let out on Friday, the US Bureau of Prisons said.

Her husband, actor William H. Macy, dropped off Huffman — aka inmate No. 77806-112 — at the Federal Correctional Institution, Dublin in the San Francisco Bay Area on Oct. 15, with one day of credit already banked for the day she was originally arrested and jailed.

A federal judge in Boston last month sentenced Huffman, 56, to two weeks in prison, a $30,000 fine, 250 hours of community service and a year’s probation after she pleaded guilty to fraud and conspiracy for paying an admissions consultant $15,000 to have a proctor correct her daughter’s SAT answers.

The Emmy-award winning actress tearfully apologized at her sentencing, saying, “I was frightened. I was stupid, and I was so wrong.”

A representative for Huffman did not immediately reply to a request for comment from the actress on Friday.

Huffman was the first parent sentenced in a scandal involving dozens of wealthy parents accused of bribing their children’s way into elite universities or cheating on college entrance exams.

Other parents in the far-reaching scandal could face far stiffer sentences.

On Tuesday, a grand jury in Boston indicted “Full House” actress Lori Loughlin, her fashion designer husband Mossimo Giannuli and nine other parents on new charges of trying to bribe officials at an organization that receives at least $10,000 in federal funding.

Loughlin and Giannulli have pleaded not guilty.

The charge of conspiracy to commit federal program bribery carries a maximum sentence of up to five years in prison and a fine of up to $250,000.

The scheme, the biggest college admissions case ever prosecuted by the Justice Department, has shown how far some will go to get their children into top universities like Stanford and Yale.

Huffman’s prison has been described by media as “Club Fed,” making its way onto a Forbes list in 2009 of “America’s 10 Cushiest Prisons.” It has housed well-known inmates in the past, including “Hollywood Madam” Heidi Fleiss.

Representatives for the actress said when she entered that she would share a room and open toilet with three other inmates and would be subject to five bed checks a day while having access to a gym, library and TV room.

Prison officials would not provide specific information on Huffman but said she would follow all the same rules and guidelines as other inmates.