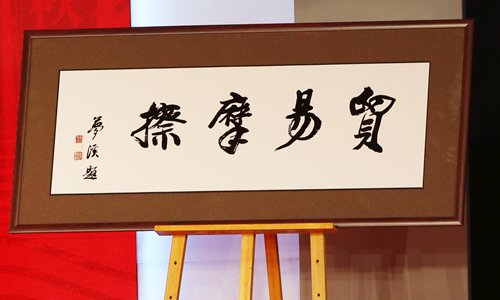 "Trade friction" is chosen as the international Chinese Character and Word of the Year respectively for 2018. (Photo: IC)

After an anti-US trade war song hit Chinese social media, another string of anti-US sentiment grew among Chinese poets who spontaneously wrote hundreds of poems charged with patriotism against intense US aggression. Original poems focused on the theme of the trade war sprung up online responding to China's folk poetry associations soliciting contributions of verse on trade wars since mid-May.Chinese folk art is increasingly giving a voice to grassroot movements, with an aim of supporting the authorities' stance on the trade war with neither a servile nor arrogant attitude.The Sanmenxia Couplets Society, based in Central China's Henan Province, held a couplets competition last week on the subject of "how should China respond to US tariff aggression" and received more than 240 submissions in two days. The society then whittled it down to eight excellent examples. Pieces favoring capitulation were absolutely not seen.Fang Juliu, head of the Sanmenxia Couplets Society, told the Global Times that "The US' repeated provocation" ignited the society's anger. He said their call for submissions received "extremely warm responses," collecting more than 240 couplets in a day and a half. The number of submissions reached an all time high."Their continued blockade and repression against China infuriated every Chinese. So we rise up to use a cultural tool to voice ordinary peoples' patriotic support," Fang told the Global Times.The move was in response to and in solidarity with the stance of the Chinese government. "Talk? Our door is wide open. Fight? We will fight to the end!" This is how China announced its sharp comments two weeks ago during a broadcast of the country's daily news show on China Central Television (CCTV).The couplet society told the Global Times that poetry lovers over the age of 45 are the mainstay of this kind of poetry, especially retirees who have witnessed China's bloody fight in the Korean War and the country's turbulent years amid various international storms over the past decades. They often have stronger and more deeply rooted nationalist and patriotic nerves."Many of the elderly suffered the humiliation, hunger and pain of being subjugated to the West's hegemony before 1949. Most have seen what America has done in the Middle East and the Arab world, leaving countless refugees and dead," said Fang."They cherish the peace and prosperity of the country more than the younger generations, then they surely became the strongest supporters of our country in the trade war against the US aggression," he said."China won't provoke, but won't fear provocation either; China doesn't want to fight, but will fight back if necessary," this became the most common theme among the selections. For example:豺狼到,坚决战斗；To the jackal, a smashing fight;朋友来,热烈欢迎。To the friends, a warm welcome. (By Chen Dongming from East China's Shandong Province)Some delivered a more confident and patriotic tone:五千年底蕴,老美可知之,血染红旗,敢让霸权收手；Five thousand years of (Chinese) historic roots, Americans you know? The five-star red flag dyed with the fresh blood of the martyrs, is it glaring enough to stop your hegemony? (By Wang Jiaxiang from North China's Tianjin Municipality)Some softer ones appeared:好牌在手,底气于胸,凭实力维持世贸规则,他美霸不服试试！Good cards in hand, confidence in the chest, we maintain the WTO rules by national strength, how could you [US] defy the rule by your hegemony?红利为朋,警言向理,靠诚心带动多边富裕,我中华何惧谈谈？Bonus for friends, uphold the truth, we drive multilateral prosperity by sincerity, how can we be afraid at the negotiating table?(By Wei Guanbao from North China's Shanxi Province)The comment it received from a judge read: showing a confidence, a strong mind, a sincerity and patience.The judge however tried to keep balance, warning a poet that compared the US to a wolf barring his fangs not to be rude and too offensive.This has been the third time that the society called for submissions under this affair. It held a couplets competition on the China-US trade conflict in April 2018, when Donald Trump's policies appeared to be capricious. The association collected more than 100 works, while censoring some intemperate comments and limited acrid personal attacks on President Trump. The second call happened earlier this month, titled "there has never been a savior," implicating that America's supposed "messianic" illusion will be eventually broken.In a similar vein, Shicixuan, an online folk poetry group, published a series of poems on the subject, which garnered thousands of hits. Many readers have spontaneously posted trade war-themed poems, including a piece of more than 100 words of seven-character quatary poems, on the message board. It is obvious from the Chinese Poetry Online, the largest internet publishing platform for poetry in China, that the exposure of poems under this topic is consistent with the fluctuating status of Sino-US negotiations. Even the tone of the poems can be a barometer of how the trade war is being negotiated.