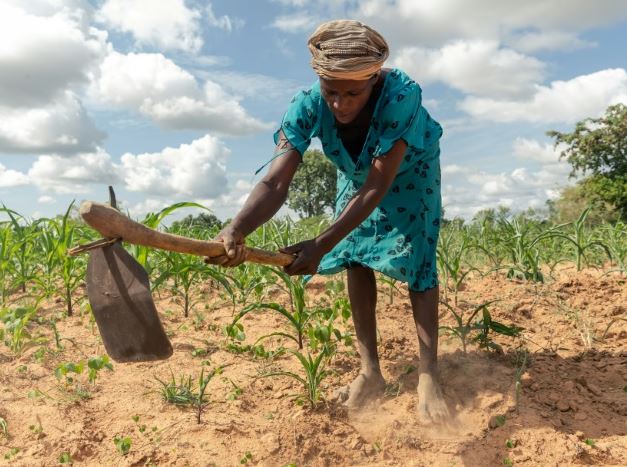 A year ago, Josephine Ganye was hit by a devastating cyclone -- now she is struggling with a crippling drought. (Photo: AFP)

Just under a year ago, Alice Posha fled her home in the middle of the night and then watched as it was swept away by floods.

The torrential rain came from Cyclone Idai, one of the worst storms ever to hit Africa and the fiercest on record to strike Buhera, a district in the usually arid province of Manicaland in eastern Zimbabwe.

Today, the scene in Buhera is entirely different. But the misery remains.

The 60-year-old, who was rehoused in October, is going through the motions of weeding a field of maize that has been withered by the worst drought in 35 years.

A little rain for her corn would be more than welcome.

"Seeing how the maize is wilting, we may have a very bad harvest," she said.

It is a scene that is being played out across southern Africa, where chronic lack of rain is threatening mass hunger and ruin.

Climate is being fingered as the big culprit.

In the space of 10 months, Buhera and many districts like it have been hammered by extremes that scientists say are consistent with forecasts about climate change.

In March 2019, the arrival of Idai unleashed devastation on eastern Zimbabwe and its neighbours Mozambique and Malawi.

Over a thousand people died and the lives of millions of others were badly affected.

"Our chickens and turkeys were swept away," said Posha's sister-in-law, Josephine Ganye, who now depends on food aid.

She is among the 45 million people in southern Africa that the UN has said are threatened by famine.

"This hunger crisis is on a scale we’ve not seen before and the evidence shows it’s going to get worse," said Lola Castro, WFP's regional director in southern Africa.

For the past five years, the entire southern tip of the African continent, where average temperatures are rising twice as fast as the global mean, has suffered from a significant lack of rain.

Every farmer, big or small, has been affected as well as breeders, hoteliers and teachers.

In Zimbabwe, the drought has added to a long list of crises, from stratospheric inflation to shortages of cash, petrol, medicines, water and electricity.

For many, daily life has become a nightmare.

The WFP says that 60 percent of Zimbabwe's 15 million people are currently food insecure.

According to Patience Dhinda, a local official, this figure hits 80 percent in Buhera where the grain depot, which should house the state food aid, stands empty.

A year ago, the crops in Buhera had already suffered from drought before being washed away by Idai. This year they risk being burned to a crisp by the relentless sun.