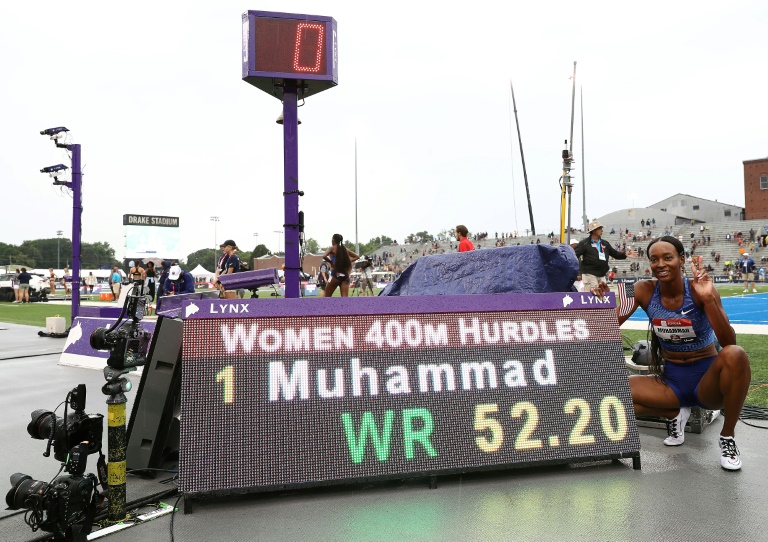 Dalilah Muhammad said she expects her new 400m hurdles world record will be broken sooner rather than later as US runners eye a potential clean sweep at this year's World Championships.

The 29-year-old Muhammad obliterated one of the longest-standing records in women's track and field on Sunday, storming home in 52.20sec at Des Moines' Drake Stadium.

The 2016 Olympic champion's blistering display sliced more than one-tenth of a second off the previous record of 52.34sec, set by Russia's Yuliya Pechonkina.

And Muhammad believes the record could tumble further as she prepares for Doha, where she will form a formidable quartet of US runners alongside Sydney McLaughlin, Ashley Spencer and reigning world champion Kori Carter, who elected not to run the hurdles in Des Moines.

"It's such a strong field, that's when records can be broken," Muhammad said.

"I think we've all just been fighting for those three top spots and we've been pushing each other mentally and physically on the track. We all know what the other is capable of and we all just want to come out on top."

Muhammad is convinced there is a real possibility that even the 52-second barrier can be broken.

"I think this is definitely just the beginning," Muhammad said.

"I think that 52 is going to get broken. If not by me, by one of the other women...51 is every 400 hurdler's dream time. Everyone's always thinking about it."

While Muhammad admitted she had been shocked to run so quickly on Sunday, she revealed that the world record had been on her radar. While training in Los Angeles, she has regularly run at world record pace or faster.

Yet for much of 2019, Muhammad has been flying under the radar, with the teenage prodigy McLaughlin garnering most of the headlines.

McLaughlin beat Muhammad at the Oslo Diamond League meeting in June, running down the Olympic champion in the final few strides for a memorable win.

On Sunday, however, Muhammad surged clear down the stretch and finished strongly to leave McLaughlin trailing in her wake.

Afterwards, she revealed her competitive rivalry with McLaughlin had spurred her on.

"People always root for the underdog, which is natural," Muhammad said. "But it's funny because I saw myself as the underdog. It's definitely kept me humble and motivated me this year."

McLaughlin also thinks the record could be lowered again.

"Anything's possible, it could be broken this year or next year," McLaughlin said. "It could happen at the worlds."