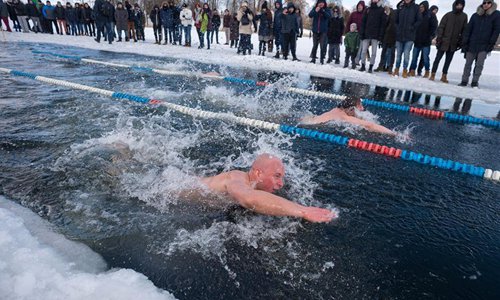 Swimmers compete in the 25-meter race in the ice hole on the lake in Trakai, Lithuania, Feb. 24, 2018. A 25-meter winter swimming race is held on Saturday in Trakai, a famous lake resort over 30km west of Vilnius. (Photo: Xinhua)

Nothing seemed impossible for a trio of Russian ice swimming enthusiasts who this week put up an artificial fir tree on the bottom of the world's deepest lake to celebrate the country's holiday.

Instead of wetsuits and scuba diving gear, the trio wore just festive trunks and socks and Santa hats as they performed a brief underwater dance routine around the tree.

The tree was installed near the shore, at the depth of some three meters, after the swimmers cut a hole in the thick ice.

They said the water temperature of just above 0 C.

The men said they also wanted to promote clean living.

"After the swim the plastic green beauty was lifted up to the surface so as not to pollute Lake Baikal," said Sergei Smetankin, who helped organize the dive.