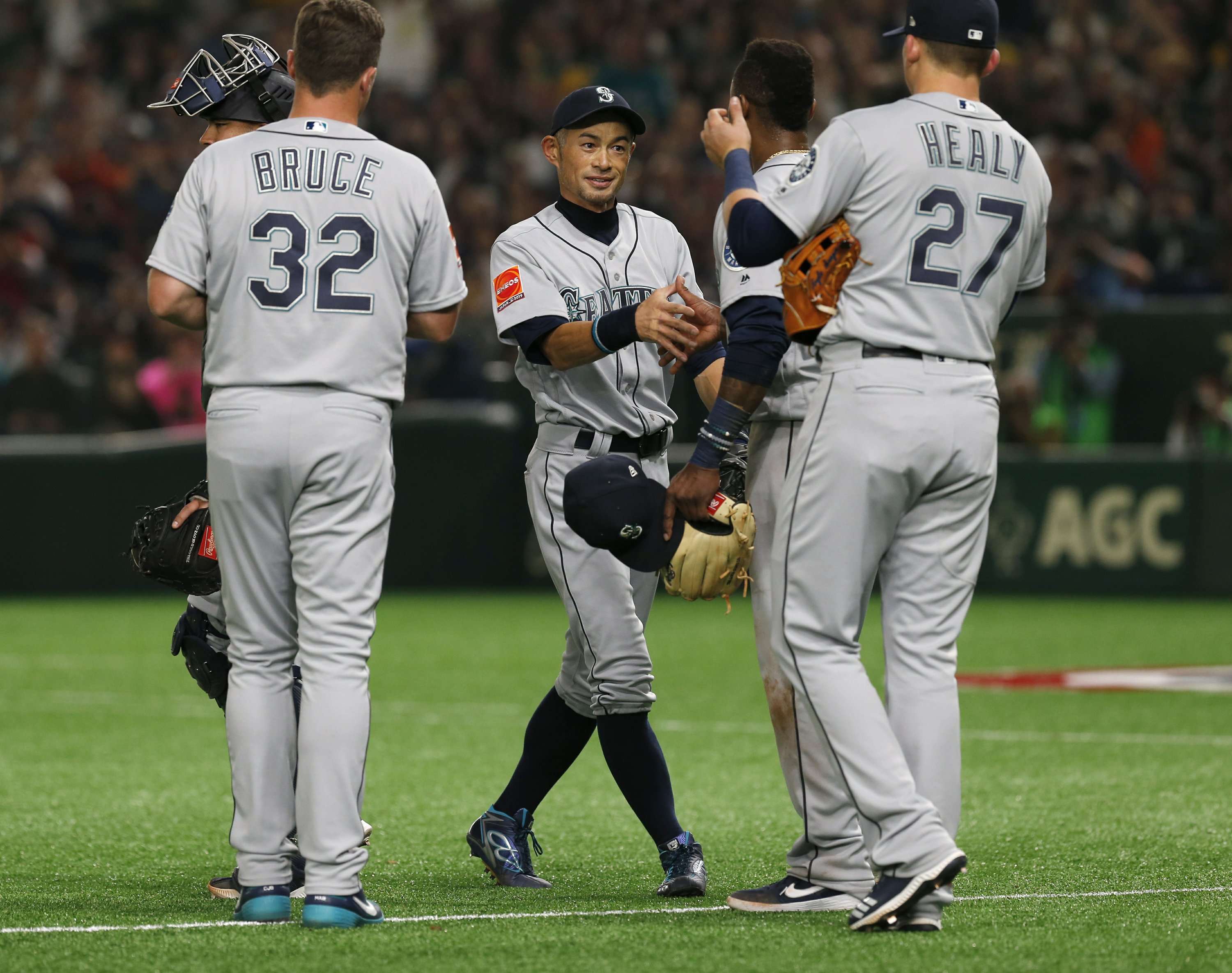 Seattle Mariners right fielder Ichiro Suzuki, center, talks to his teammates while leaving the field for defense substitution in the fourth inning of Game 1 of the Major League opening baseball series against the Oakland Athletics at Tokyo Dome in Tokyo, Wednesday, March 20, 2019. (Photo: AP)

Ichiro drew all the cheers. Most everyone else on the Seattle Mariners did all the hitting.

A crowd that came to salute Ichiro Suzuki in his homeland saw Domingo Santana deliver the biggest hit at the Tokyo Dome, a grand slam that sent Seattle over the Oakland Athletics 9-7 Wednesday in the Major League Baseball opener.

Batting ninth and knowing he’d get two plate appearances, Ichiro popped up and worked a walk. The 45-year-old star took his spot in right field to begin the bottom of the fourth inning, then was pulled to another huge ovation. He was met with hugs from the Mariners on the diamond.

“The fans in Japan probably aren’t used to the reception I got from my teammates, but it’s not that unusual in the majors,” Ichiro said.

Mariners manager Scott Servais said Ichiro will play in Thursday’s final game of the series, but there is no guarantee he’ll start.

“We certainly want to give him an opportunity to go out and play, but we also want to get some other guys in the game,” Servais said. “I understand everybody wants to see him go all nine innings. We’re trying to do the best thing for the team and Ichiro understands.”

This marked the earliest opening day ever — the summer sport actually started on the last day of winter. No doubt, most fans in North America were sound asleep when Oakland’s Mike Fiers threw the first pitch at 5:36 a.m. EDT (6:36 p.m. local).

A year after the Cubs’ Ian Happ homered on the very pitch of the season, the ball again was flying.

“It was great. It’s a fun crowd to play in front of. Even the pregame stuff was exciting. I think everybody had a good time,” Oakland manager Bob Melvin said.

A packed crowd of 45,787 was buzzing for its favorite star, sending cheers, chants and camera flashes for Ichiro bounding all around the park. Signs and Ichiro jerseys were plenty, too.

Ichiro became the second-oldest position player to start an opener, only a few months younger than Julio Franco was for Atlanta in 2004. Several of the players in this game weren’t born when Ichiro began his pro career.

Ichiro is getting very near the end of a sensational pro career that began in Japan in 1992 when he was at 18. He stopped playing last May to become a Mariners special assistant — after totaling 4,367 hits on both sides of the ocean — and struggled in spring training this year.

Santana, one of many Mariners new to the lineup, had no trouble at the plate. His opposite-field grand slam capped a five-run burst in the third for a 5-2 lead and Beckham’s drive in the fifth made it 9-4.

Beckham got three hits and scored three times. Also making a nice debut for Seattle were Jay Bruce, who singled for MLB’s first hit of the season, and Edwin Encarnacion, who scored twice.

The Mariners won for the 12th time in 15 openers. They also beat the A’s in 2012 when MLB last started in Japan.

Seattle starter Marco Gonzales hung in for six innings, allowing three earned runs and seven hits, and got the win. Felix Hernandez had started the last 10 openers for the Mariners.

Hunter Strickland pitched a scoreless ninth for a save in his first game for Seattle. Edwin Diaz, who led the majors with 57 last year, was traded with Robinson Cano to the Mets in the offseason.

Fiers, making his first opening day start at 33, was hit hard for three innings and took the loss.