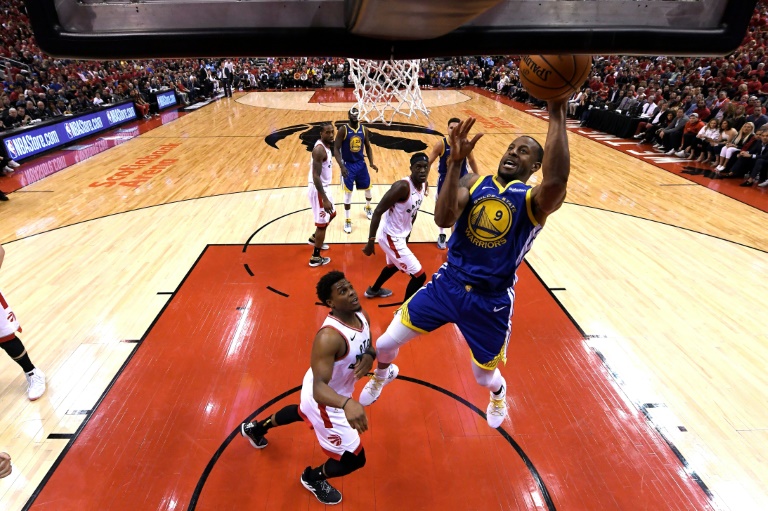 Andre Iguodala drives to the basket in game two of the NBA finals as Golden State levelled the series at 1-1 with a 109-104 win over Toronto. (Photo: AFP)

Seeking a third consecutive title and fourth in five seasons, the Warriors knotted the best-of-seven series at 1-1 ahead of games three and four on Wednesday and Friday in California.

With former US President Barack Obama in the crowd, Golden State trailed by 12 points in the second quarter, made the first 18 points of the third and led by as much as 72-59.

Toronto rallied, holding the Warriors scoreless for more than 5:30 only to fall short on the last of 2015 NBA Finals Most Valuable Player Iguodala's eight points.

"His play in the second half was really inspiring at both ends. He did a fantastic job," Warriors coach Steve Kerr said. "He has hit a lot of big shots in the finals before, so he was unfazed.

"I think he sensed that we needed his production in that second half and he came alive."

"We've been through a lot. We've battled through injuries," Iguodala said. "It's a mindset. You go play. Not saying it's smart, but you only have about a week left to gut it out and see if you can help the team."

It left reserves to play key roles in the triumph.

"It was a great win," Kerr said. "We got to go home and protect our home floor and we'll see about all the injuries. But I'm very proud of our team. It was a hell of an effort from the bench."

The Warriors were again without top scorer Kevin Durant, but the forward is expected back soon after missing seven games with a right calf strain.

Victory was vital for Golden State. Of 34 teams that fell behind 0-2 in the NBA Finals, only four rallied to win the crown.

The Warriors have now won at least once on the road in 23 consecutive playoff series.

Kyle Lowry and Danny Green made 3-pointers to pull the Raptors, in the first finals of their 24-season history, from a 13-point deficit to within 92-88 early in the fourth quarter.

Reserve Quinn Cook answered with back-to-back 3-pointers to ignite a 14-6 Golden State run that stretched the Warriors' lead to 106-94 with 5:39 to play.

"I'm really proud of our guys for fighting and battling," Raptors coach Nick Nurse said. "They were obviously a little more aggressive. We were just a little bit impatient and didn't hold enough composure.

"They did a really good job of getting out of there with speed and a lot of those were just probably mistakes by us or just a half step too slow."

Toronto seized a 47-35 lead but Curry, who missed his first six shots, scored 15 of the Warriors' last 17 second-quarter points and Golden State trimmed the half-time deficit to 59-54.

"Just staying in the game at the end of the second quarter was very important," Kerr said. "The place was going nuts, we couldn't score, and Steph and Klay both got loose. We could kind of breathe at halftime.

"Our guys felt renewed life at that point and came out and just had a great run to take control of the game and we were able to finish it out from there."

Golden State opened the second half on an 18-0 run to seize a 72-59 lead, aided by the Raptors missing their first nine shots of the third quarter and committing seven turnovers in the pivotal span.

"We held them to 37 percent and forced 15 turnovers," Kerr said. "It was championship defense and that's what it's going to take."

"We got stops," Draymond Green said. "That's our best offense when we're getting stops and we're pushing the ball in transition. It was big."