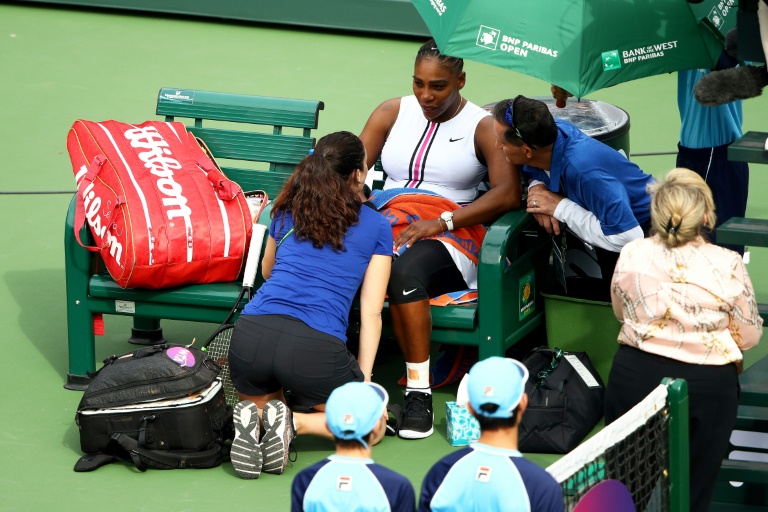 Serena Williams talks with medical staff before retiring from her match against Garbine Muguruza with a viral illness in the third round of the Indian Wells WTA tournament. (Photo: AFP)

Serena Williams's first tournament since the Australian Open came to an abrupt end on Sunday as the ailing 23-time Grand Slam champion retired from her third-round WTA match against Garbine Muguruza at Indian Wells.

Muguruza was leading 6-3, 1-0 when Williams called it a day in the battle of former world number ones because of a viral illness.

"Before the match, I did not feel great, and then it just got worse with every second; extreme dizziness and extreme fatigue," Williams said in comments released via tournament organizers.

The 10th-seeded American, continuing to work her way back up the rankings in the wake of time off to have a baby, had made a strong start, winning the first three games.

But she called for the trainer after dropping six straight.

After a long talk with medical personnel Williams took the court for the second set, but after Muguruza held serve at love Williams called a halt.

"By the score, it might have looked like I started well, but I was not feeling at all well physically," Williams said. "I will focus on getting better and start preparing for Miami."

It was the sixth meeting between Muguruza and Williams, all five prior coming in Grand Slams.

The last two of those were in finals, with Williams beating the Spaniard for the Wimbledon title in 2015 and Muguruza taking the 2016 French Open crown.

It was a tough draw for Williams, who defeated former world number one Victoria Azarenka in her second-round opener.

Muguruza was sorry to see it end the way it did.

"I wish I'm going to see her soon and feeling better," added the Spaniard, who advanced to a fourth-round clash with seventh-seeded Kiki Bertens of the Netherlands, a 7-6 (12/10), 6-4 winner over Britain's Johanna Konta.

Serving for the match, Bertens saved one break point and let two match points slide by before she reached the round of 16 for the first time at Indian Wells when Konta sent a forehand wide.

World number two Simona Halep had her hands full with Ukrainian qualifier Kateryna Kozlova but emerged with a 7-6 (7/3), 7-5 victory in her first meeting with the 114th-ranked player.

There were service breaks aplenty as Halep and Kozlova traded four on the way to the first-set tiebreaker and four more to open the second set.

"When I was leading the match, she played without fear, I felt like she was playing much better in those games," Halep said.

"It was difficult for me to close those sets, but I'm actually proud that I could do that," added the Romanian.

Halep next faces 61st-ranked Czech Marketa Vondrousova, who followed up her win over 2018 finalist Daria Kasatkina with a 4-6, 6-3, 6-4 win over 22nd seed Jelena Ostapenko of Latvia.