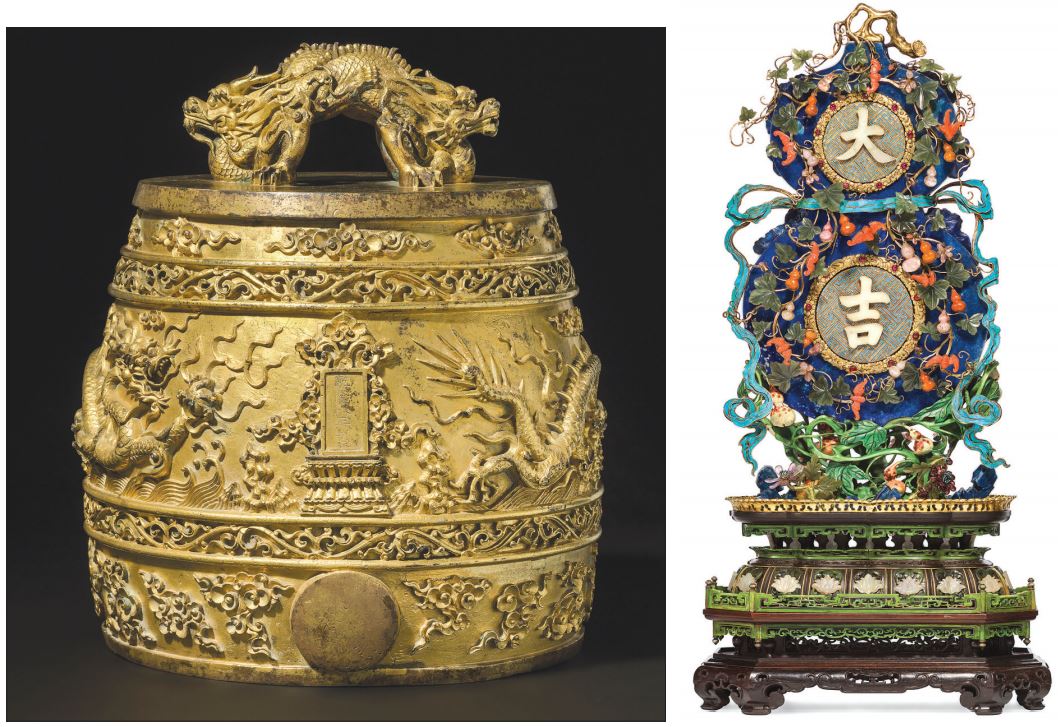 The gilt bronze bell (left) and imperial plaques to be auctioned at Christie's. (Photo: China Daily)

A rare and magnificent imperial gilt-bronze bell from the Qianlong period, a copper-red decorated Ming-style moonflask of the same period and a 19th-century imperial kesi orange-ground twelve-symbol robe are the headlining pieces of the upcoming Asian art-themed London auction week.

The ancient musical instrument, known as a bianzhong, is dated to the eighth year of the Qianlong reign, around 1743, and it is expected to fetch a high estimate of 1.2 million pounds ($1.5 million).

The item being sold at Christie's features a pair of five-clawed Chinese dragons surrounded by scrolling clouds above crashing waves, separated by two rectangular inscribed panels.

Kate Hunt, a specialist head of Chinese art and ceramics at Christie's describes the craftsmanship of the item as extraordinary.

The finely cast bells were essential in conducting Confucian rituals at the Imperial altars and other state ceremonies, including ascension ceremonies when a new emperor took the throne, formal banquets and other court assemblies, and during processions of the Imperial Guard.

Another highlight is a rare pair of Imperial embellished lapis lazuli Da Ji double-gourd-form plaques, also Qianlong period with an estimate of 180,000 pounds at the Fine Chinese Ceramics and Art sale on Nov 5.

Each plaque is tied with a long giltbronze ribbon adorned with bright turquoise kingfisher feathers.

The pair are also highly decorated with various colored stones representing leafy vines and smaller gourds, with "bats in-flight" made of coral.

Hunt said the lot is a rarity and believes no other pair or a single piece to this standard has been offered in the auction.

The item has a provenance dating to Scottish merchant Daniel Beale, who acquired the piece in China in the 19th century. The lot is being offered by a direct descendant of Beale.

Another major sale takes place at Sotheby's on Nov 6, where the Mingstyle moonflask of the Qianlong period, is expected to sell for 50,000 pounds and a Qing Dynasty (1644－1911) large jadeite boy headrest has an estimate of 150,000 pounds.

In Sotheby's separate Imperial Porcelain sale, a carved Qianlong-era celadon glazed peony vase is set to go under the hammer for 500,000 pounds.

"This season we are delighted with the quality and freshness of many of the works we have sourced, in particular, the exceptional private collection of imperial porcelains distinguished by its refined and elegant aesthetic," said Caroline Schulten, Sotheby's European Head of Chinese Art.

"Treasures include a stunning example of Qianlong period porcelain－the graceful celadon-glazed peony vase which graces the cover of our catalogue. This special piece demonstrates the artistic and technical achievements of the Jingdezhen potters and reflects the opulent taste of the Qing Court under the Yongzheng and Qianlong emperors. That taste for exceptional porcelain masterpieces continued in dynastic China over the centuries, a legacy that is keenly felt by today's collectors."

Bonham's Fine Chinese Art sale will be held on Nov 7, featuring a limestone bust of the Buddha dated to the Northern Qi Dynasty (550－577) and a 19th-century imperial kesi orange-ground twelve-symbol robe.