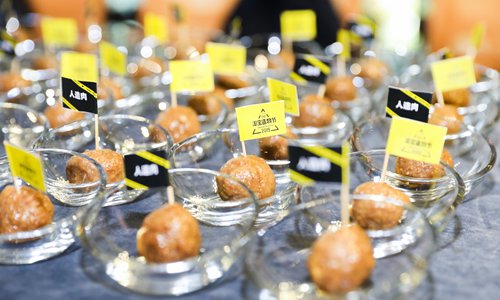 A US company that hopes to introduce a plant-based meat substitute to the Chinese dining table amid sky-rocketing pork prices must first overcome government regulatory hurdles before it can hope to convince a skeptical Chinese public, Chinese experts say.
Impossible Foods, which owns business in Hong Kong and Macao, was in talks with Chinese companies at a forum in Southwest China's Yunnan Province on Wednesday, looking for a potential partnership to tap the mainland's massive meat market.
Patrick Brown, CEO and founder of the company, said they are in negotiations with Chinese companies and evincing enormous interest, the 21st Century Business Herald reported on Thursday.
Yunnan officials have also made overtures to the company to set up branches in the province.
China consumes a quarter of the world's meat so the company is naturally eyeing the huge market, Brown said, noting that the company has been engaging with both Chinese government and company officials.
Getting a government permit is the top issue, Brown stressed.
Meanwhile, the company could not be reached by the Global Times for more details as of press time.
Chinese experts pointed out that there are no regulations about access to the Chinese market for plant-based meat.
"Such a product has to pass a series of safety risk assessments before being taken to consumers," Zhu Yi, an associate professor of food security and nutrition at China Agricultural University in Beijing, told the Global Times on Thursday.
Synthetic meat made by domestic companies outnumbers foreign, Zhu noted.
Chinese synthetic meat tastes better than foreign, said Zhu, adding that Chinese consumers would prefer such products from Chinese companies.
Many Chinese internet users met news of synthetic meat with skepticism, sharing their doubts about its health and nutritional value.
Zhu said the meat is mainly made from vegetarian ingredients such as pulses.
"Technically it is healthy," she noted.
However, Zhu Danpeng, a Guangzhou-based food industry analyst, said somehow in the process of synthesis, some producers tended to use more additives, "and their techniques of synthesizing are not at the same level. So a mature process matters as well."
Moreover, the possible arrival of Impossible Foods triggered another discussion over whether synthetic meat improved food safety as pork prices soar.
"Synthetic meat will not replace real meat in the near future in terms of taste and nutrition," Zhu Danpeng said. "So the soaring prices of pork meat will not pave the way for fake meat."
Even if the price of pork overtakes Moutai at 1,500 yuan ($166) a bottle, many Chinese would still prefer "real meat," Zhu Danpeng joked.
"For Chinese, taste is very important," she said.