In Baltimore, violins to combat violence 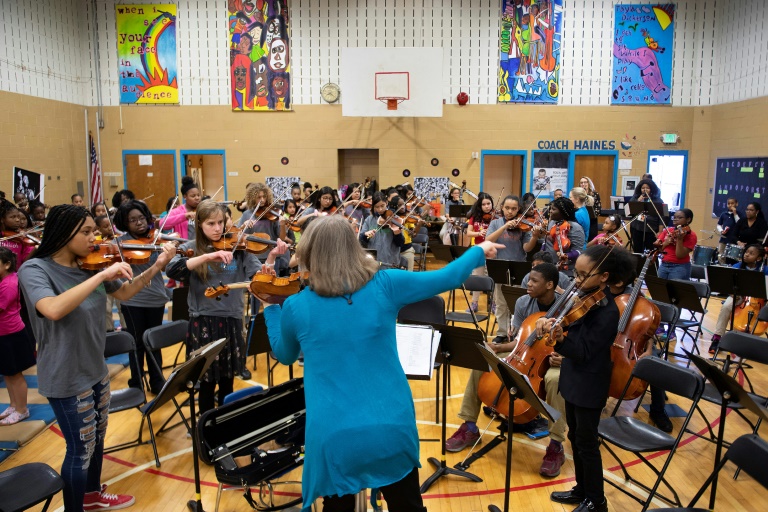 Teacher Jane Cromwell leads the OrchKids orchestra at a recent concern in Baltimore -- in all, 1,300 children are enrolled in the after-school program. (Photo: AFP)

As the conductor raises her baton, dozens of children come to order, and their everyday cacophonous chatting gives way to a melodic cascade of notes.

The 60 or so students are part of OrchKids, a program run by the Baltimore Symphony Orchestra, which is hoping to bring change to the troubled city through the power of music.

"We are trying to combat some of the social challenges here in Baltimore," says program director Nick Skinner.

One recent OrchKids concert took place just a few blocks from where Freddie Gray, a 25-year-old black man, was arrested in April 2015.

Gray fell into a coma while in police custody and later died, and the incident sparked violent protests in Baltimore, a port city plagued by violence, drugs and crime.

"Charm City" is now one of the most violent in the United States, with an average of more than 300 murders a year. Nearly a quarter of its 620,000 residents live below the poverty line.

In recent years, urban renewal projects have sought to break the spiral of gloom, but in some neighborhoods, only a few blocks separate condemned buildings from hip hotspots.

Those behind OrchKids remain optimistic.

In all, 1,300 children -- from grade school to high school -- are enrolled in the program, which offers them free music education, four afternoons a week after school.

The program offers them a safe place to go after school without charge -- easing the minds of busy parents who would otherwise need child care or be forced to leave their children unsupervised.

"We're providing not only academic support but also a healthy snack and a dinner before they go home," Skinner explains.

OrchKids -- which takes inspiration from El Sistema, Venezuela's venerable music education program -- started a little more than a decade ago with just 30 students.

"Back when we started the program in 2008, most of the community thought that we were actually undercover cops," Skinner says.

"There was no trust," he adds, recalling the long history of distrust, especially in the city's African American community, toward local officials and a police force seen as racist and corrupt.

'A different kind of future'

This year, that first class of 30 students is getting ready to graduate from high school and some will head on to university -- firsts for many of the families involved.

Some of the OrchKids students have studied at the prestigious summer camp at the Interlochen Center for the Arts in Michigan.

Ludy Gutierres, a 12-year-old who plays the bassoon, even performed for Barack Obama.

"Yeah, that was just once... It was fun," Ludy said, nonchalantly, as if playing a concert for a former US president were an everyday experience.

Even if music is not a career option for most of the students enrolled in OrchKids, the program offers them a perspective that is not always available to inner-city kids, especially in Charm City.

Bella, a middle schooler who also plays bassoon, knows that her participation in OrchKids will give her a leg up when it comes time to apply for college, even if she does not want to be a musician.

"It's a good way to teach patience," she says.

Alsop, who leads orchestras around the world, has made Baltimore her home since 2007, when she became the first woman to lead a major US symphony orchestra.

She says using her platform to make classical music more accessible, and possibly offer a positive influence to children in her home city, was important to her.

"The issues of violence that we face are pretty overwhelming," Alsop explains, adding that the city's children "live under a lot of stress."

"That really takes a toll and I think through programs like OrchKids, they start to see a different kind of future," she adds.

"They're able to travel to play... they're receiving positive affirmation for what they're doing," she says.

"As a result, many of them are looking at futures that they wouldn't have considered before."

The American conductor -- who also leads the Sao Paulo State Symphony Orchestra and is chief conductor designate of the Vienna Radio Symphony -- says she hopes to reach 10,000 children through OrchKids.

That would be one in eight kids in Baltimore's public school system.