CULTURE In Cambodia, fears tarantula may go off the menu

In Cambodia, fears tarantula may go off the menu 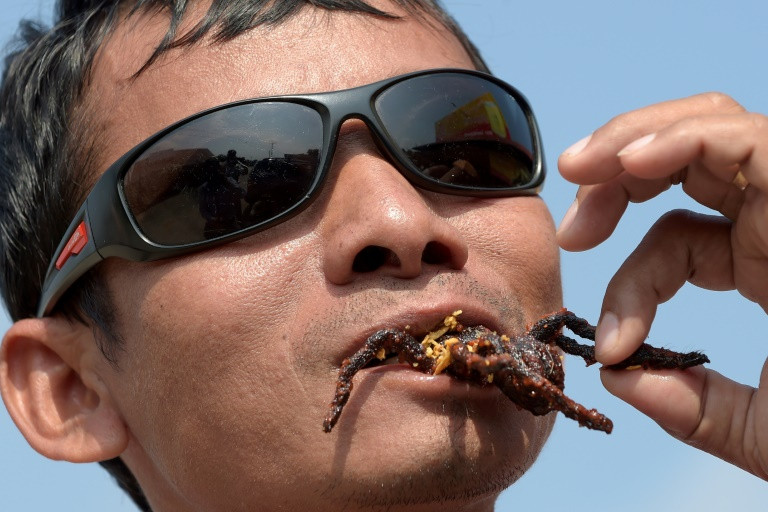 Locals say the spiders are best prepared simply: dipped in salt and garlic and then tossed into a pan of sizzling oil.(Photo: AFP)

While a plate piled high with hairy, palm-sized tarantulas is the stuff of nightmares for some, these garlic fried spiders are a coveted treat in Cambodia, where the only fear is that they may soon vanish due to deforestation and unchecked hunting.

Taking a bite out of the plump arachnids has become a popular photo-op for squealing tourists who pass through Skun, the central Cambodian town nicknamed "Spiderville" for its massive market of creepy crawlers.

But the bulk of the clientele are locals who are there to load up on a traditional snack known as "aping" that vendors say is becoming scarce -- and more expensive -- as rapid development wipes out jungle habitats.

"Aping are famous in Cambodia but now they are not abundant, they have become rare," Chea Voeun, a tarantula vendor, told AFP from her stall where she sells other fried insects including crickets and scorpions.

Voeun, who has been selling the delicacy for 20 years, used to source the spiders from nearby forests, where hunters dug them out of burrows dotting the jungle floor.

But those trees have since been razed for cashew nut plantations, forcing Voeun and other vendors to rely on middlemen to procure the spiders, which are harvested from faraway forested provinces.

That has jacked up the price of the tarantulas to $1 a piece, a nearly tenfold spike over the past decade. 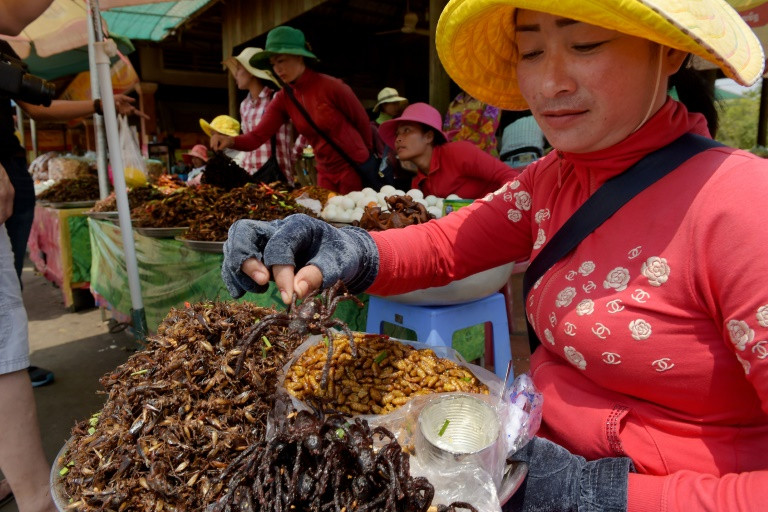 Vendors fear that stocks are running low and will kill their businesses in the long-term.（Photo：AFP）

For now the price surge is helping line the pockets of vendors who can unload several hundred spiders a day, but they fear that stocks are running low and will kill their businesses in the long-term.

"When the big forests disappear, these spiders will no longer exist," said seller Lou Srey Sros, as tourists snapped pictures of children playing with the eight-legged creatures.

Locals say the spiders, whose taste has been compared to crab, are best prepared simply: dipped in salt and garlic and then tossed into a pan of sizzling oil.

Tarantulas have been part of the Cambodian diet for generations, prized for their purported medicinal qualities. 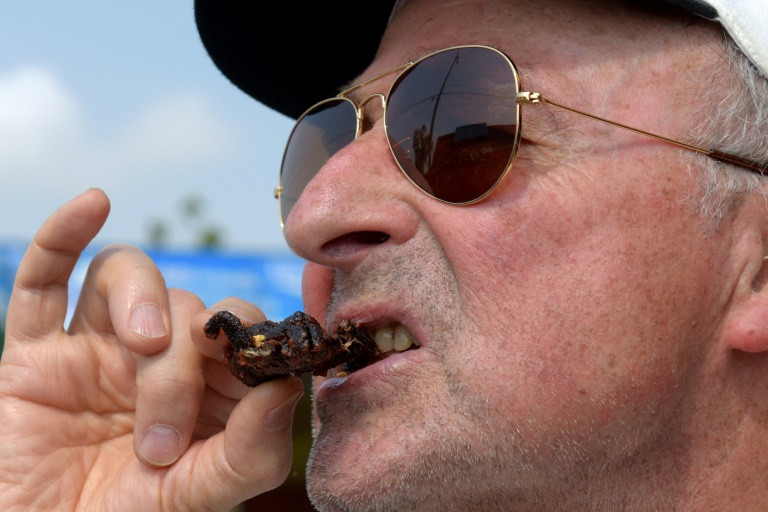 Taking a bite out of the plump arachnids has become a popular photo-op for squealing tourists who pass through Skun.（Photo：AFP）

But they are believed to have cemented their place on the Cambodian palate during the brutal years under the Khmer Rouge in the late 1970s.

The Maoist regime forced millions of Cambodians out of the cities and was ultimately responsible for murdering, overworking and starving to death nearly a quarter of the population in its drive to create an agrarian utopia.

Famine pushed many to forage for any sustenance they could find, eating everything from rats to lizards and tarantulas.

While the Khmer Rouge's devastating rule came to an end in 1979, spiders stayed on the menu.

But the jungles which are home to them are now rapidly disappearing.

Cambodia has one of the fastest deforestation rates in the world, with huge swaths of forest cleared for rubber plantations and timber. Conservationists say over-harvesting due to high demand is driving the spiders out of existence.（Photo：AFP）

The Southeast Asian country has lost 20 percent of its forest cover since 1990, according to the conservation NGO Fauna and Flora International (FFI).

It is not just habitat loss but over-harvesting to meet a high demand that is driving the spiders out of existence, said Tom Gray, director of Science and Global Development for Wildlife Alliance.

"Across Southeast Asia it is unsustainable hunting in our forests rather than direct habitat loss which is causing the biggest impacts on biodiversity," he told AFP.

The tourist frenzy has helped fuel the tarantula trade, with busloads of travellers stopping in Skun to taste the unusual snack.

"It just makes me a little bit swimmy because that was not what I would eat at home but I am here so it's time to try them," Australian tourist Elisabeth Dark said after taking a bite of a spider leg.

But for many Cambodians, the only fear factor is that the treat will soon run out.

"The next generations may not know about them because these beasts have become so rare, not like before," lamented vendor Lou Srey Sros.

"As more people clear (forests) to plant cashew nut trees, they will be gone."