CULTURE In COVID-19 darkness, gift of a 'Moment of Light' to museum

In COVID-19 darkness, gift of a 'Moment of Light' to museum 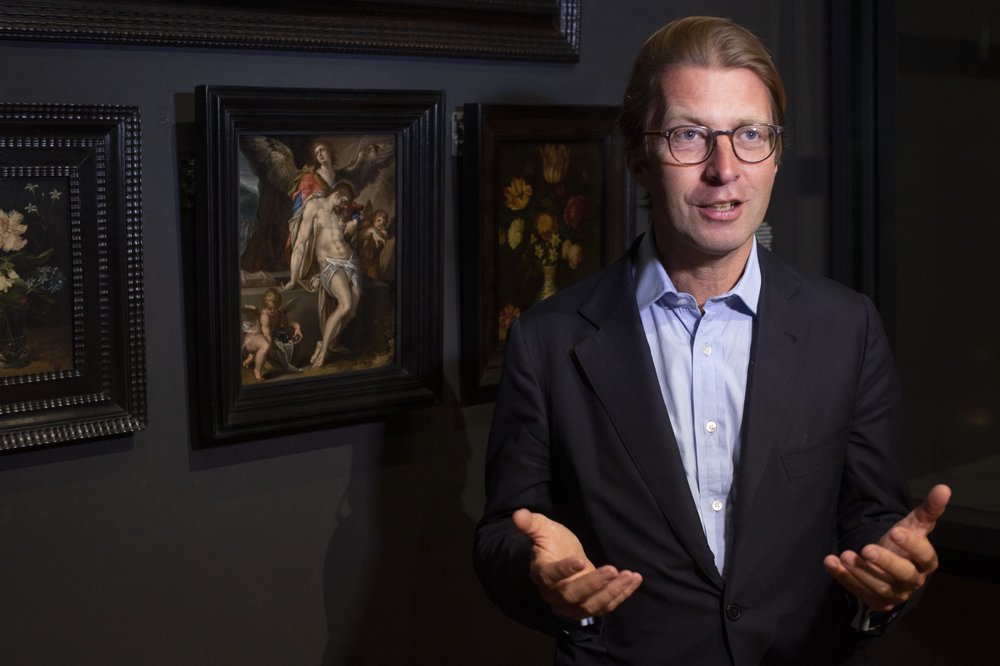 Rijksmuseum director Taco Dibbits, standing in front of Bartholomeus Spanger's "Body of Christ Supported by Angels" oil on copper painting, left, discusses the gift of the major painting the cultural institution received to underscore support for the victims of the coronavirus pandemic and the crisis that museums face world wide, which went on display in Amsterdam, Netherlands, Monday, June 1, 2020. (Photo: AP)

If not for the pandemic, Amsterdam’s Rijksmuseum would have missed out on a classic Dutch 16th century painting it so badly craved.

Instead, the work now graces a central hall of one of the world’s most famous cultural institutions -- all because a wealthy dealer in old masters elected to pay a very unusual tribute to COVID-19 victims.

When the museum reopened Monday after the Dutch lockdown was eased, General Director Taco Dibbits stood beaming before Bartholomeus Spranger’s “Body of Christ Supported by Angels.”

“This gift came and it was a moment of light,” he said.

His joy contrasted sharply with the disappointment he felt at the early March TEFAF art fair — an annual jamboree in the southern Netherlands where culture meets capital. He thought the oil-on-copper painting was his to buy.

“We were standing there with our curators around the painting and saying how wonderful it was,” he said. What they didn’t know was that the picture had been sold almost on arrival at the fair.

Dibbits went back to Amsterdam, and was forced to deal with the impact of the coronavirus on his institution. With the public shut out, he said, “we were losing 1 million (euros) a week. ... That’s really a very substantial part of what we need to make the museum function.”

So imagine Dibbits’ surprise when he got a call from international dealer and collector Bob Haboldt, who owned the painting and had earlier said he sold it.

It turned out that as soon as the pandemic broke, the sale was canceled.

The globe-trotting Dutchman, who lives in France and Italy and has offices in Amsterdam, Paris and New York, was tied down, just like everybody else.

“In isolation, I took the step that I would not think about its financial value,” he said in a phone interview from Italy. “Only its emotional value.”

He refused say how much the painting could fetch, but “it is a big gift, no matter how you look at it.”

Haboldt said he decided to donate the painting “in memory of the victims of COVID-19, not only those who died but also those who suffered,” and to serve as inspiration to others to support the arts.

“I wanted it to go before a very big audience,” he said, and as an native of Amsterdam, the Rijksmuseum was the obvious choice.

The painting itself seems an allegory for both the times in which we live in and the future for which the world hopes.

A dead Jesus Christ is lifted from his tomb by three angels and taken skyward. The image recalls the scenes of suffering that have played out all over the world these weeks and months during the pandemic.

“The picture represents a big message,” Haboldt said. “I hope people will stop in front of it for a moment and realize that although they look at a religious painting, they are looking at something timeless, full of compassion, mercy and hope.”

Museums around the world have been struggling, and UNESCO estimates that one out of eight might not survive.

Said Dibbits: “That in a time where there’s so much uncertainty, also for the art market and the dealers — that a dealer decides to donate a work when he doesn’t know where his future is going, I think that’s something very special.”