CULTURE In desert of Oman, life on Mars

In desert of Oman, life on Mars 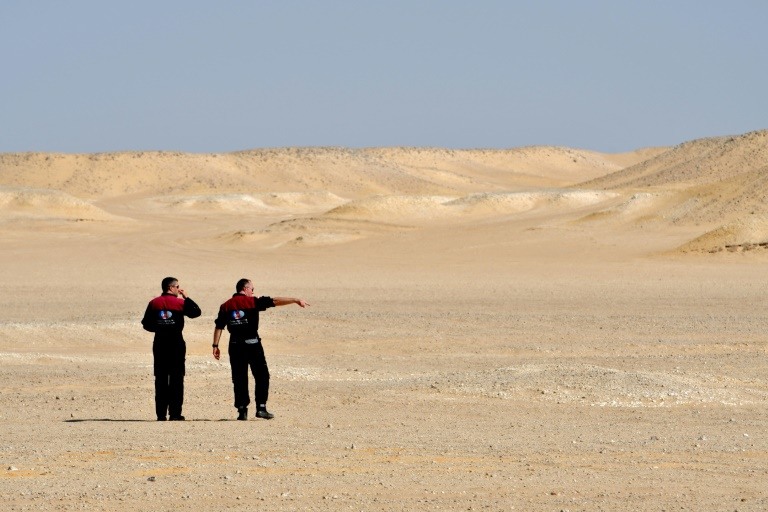 Members of the Austrian Space Forum inspect a site in Oman's Dhofar desert, near the southern Marmul outpost, on October 29, 2017, in preparation for a four-week Mars simulation mission due to begin next year. Photo: AFP

In sunglasses and jumpsuits, a crew of European test astronauts is laying the groundwork for a Mars simulation in the barren expanse of the Omani desert, a terrestrial mission intended to pave the way to the red planet.

The "analog astronauts" of the Austrian Space Forum -- a volunteer-based collective -- have arrived in Oman to begin preparations for a four-week simulation mission due to begin next year.

Touching down at Marmul Airport, a remote outpost used by oil workers, the five-person advance team loaded up on sunscreen and, with their Omani counterparts dressed in crisp white gowns and colourful turbans, boarded four-by-fours and plunged into the desert under the blazing sun.

Oil installations receded into the background and only rocky plateaus and ancient sandy riverbeds remained as far as the eye could see. Maps were spread on the hoods of the vehicles.

"We want to simulate Mars on Earth and so we need a place that looks as much like Mars as possible. And we found it here in Oman," Alexander Soucek, the lead flight director of the AMADEE-18 mission, told AFP.

The team was on a quest to pin down the location of the base camp for the simulation, to be held in February.

"Here the humans coming from Earth will land after six months travel through space... Simulated, of course!" Soucek said upon arrival at the chosen site.

"When we fly to Mars in reality, we will need as many questions as possible already answered so that we are really well prepared."

During the mission, the team will carry out a series of experiments, from growing greens without soil in an inflatable hydroponic greenhouse to testing an autonomous "tumbleweed" rover, which maps out terrain while propelled by the wind.

"There are very few groups on this planet testing these procedures and doing these high-fidelity simulations," said Soucek. "We are one of them."

The team hopes the simulation will help nail down future tools and procedures for the first manned mission to Mars.

A member of the Austrian Space Forum inspects a site in Oman's Dhofar desert, near the southern Marmul outpost, on October 29, 2017, in preparation for a four-week Mars simulation mission due to begin next year. Photo: AFP

Field commander Gernot Groemer predicts a Mars mission may be carried out by a collective of the United States, Russia, Europe and possibly China relatively soon -- with the first human to set foot on the red planet maybe already born.

"What we're going to see here in about 100 days is going to be a sneak preview into the future," said Groemer, describing a U-shaped encampment where "an exquisitely compiled suite of experiments" will take place.

Those include experiments designed to test human factors that could affect pioneering astronauts, such as mental fatigue and depression.

Just 15 people will enter the isolation phase, when their only way to troubleshoot snags will be through remote communication with "earth" in Austria. 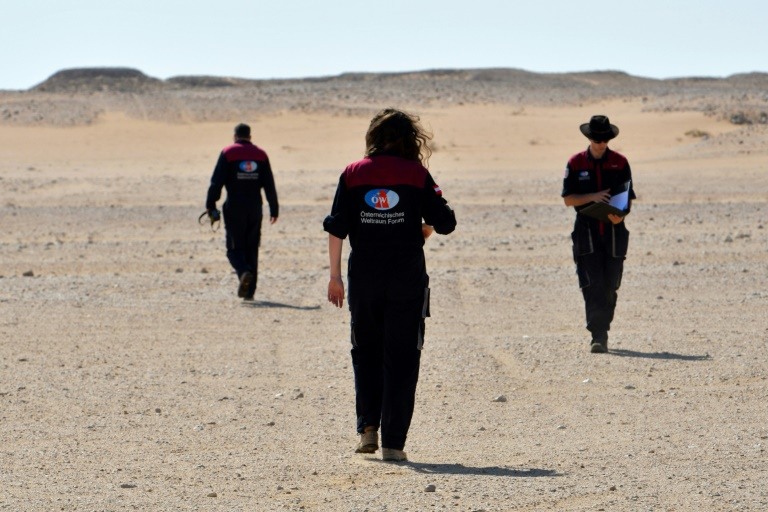 Members of the Austrian Space Forum inspect a site in Oman's Dhofar desert, near the southern Marmul outpost, on October 29, 2017, in preparation for a four-week Mars simulation mission due to begin next year. Photo: AFP

The total cost of the project is expected to be around half-a-million euros, covered mainly by private donations from industry partners.

Critics of such space missions see the massive amounts of money as a luxury in a time of austerity measures in Europe and depressed oil prices in the Gulf.

The Austrian Space Forum argues the money is not being "thrown into space" and that the tools being developed are not only useful for life on a distant planet but for our own.

"Most people every day use a handful of space technologies without even knowing it," said Groemer, listing off satellite imagery, fuel injection for cars and breast cancer screening software.

On Monday the Austrian Space Forum signed a memorandum of understanding with Oman, making the sultanate's selection as the mission site official.

For the Omani Astronomical Society, which invited the Austrian Space Forum, the mission is a way to inspire the country's youth.

A series of lectures is taking place at Sultan Qaboos Grand Mosque in Muscat, geared especially toward hundreds of young students.

"The whole idea is to ignite imagination within the young society in Oman, female and male, and I hope this journey of discovery will help them to always search for the unknown," the geologist said.